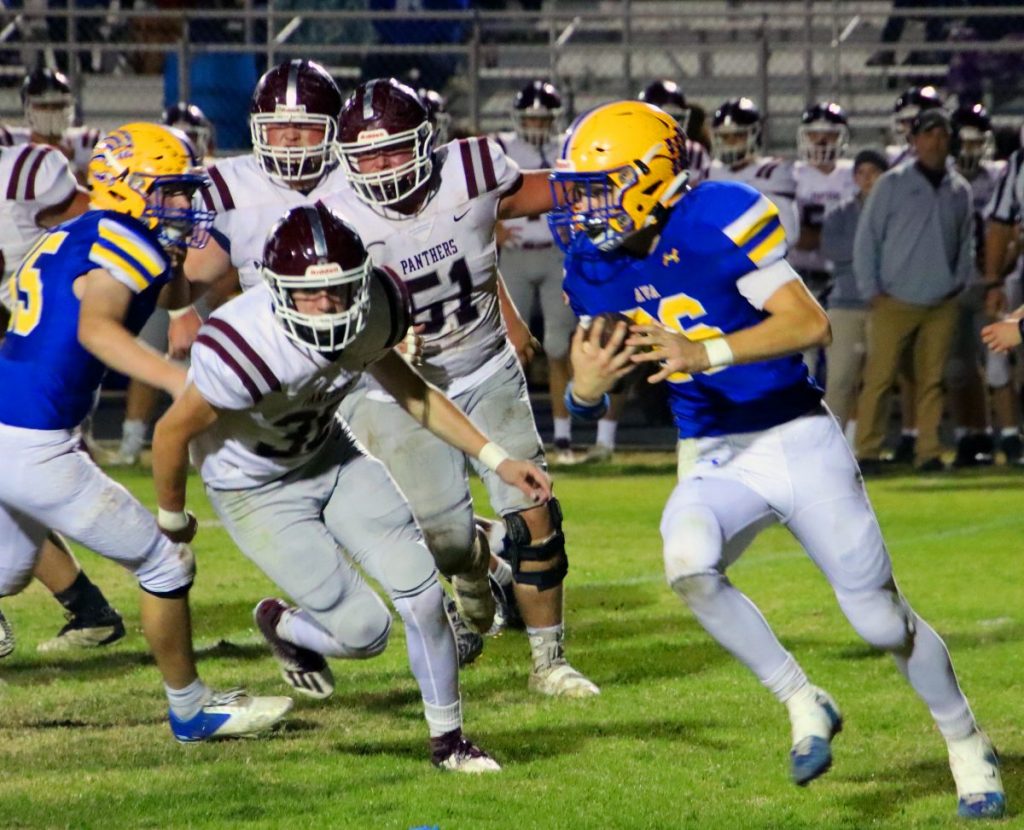 The Ava Bears football squad fell to the Mountain Grove Panthers, 28-14, in the semi-final game of Class 3 District 5. The Bears finished out the season with a 5-5 record.

Doug Berger/Herald
Ava running back Jacob Lirley takes the hand off from Zach Richards in a district game with Mountain Grove.

“We gave Mountain Grove a little scare in the third quarter, and I’m proud of how they played,” Bears coach Dan Swofford stated.

Mountain Grove scored on their first possession of the game and were able to hang on to the lead for the remainder of the contest, but Ava pulled within a touchdown with 2:18 remaining in the third period.

The Panthers had recovered an onside kick attempted by Ava on their own 46 yard line to open the game. Ava had Mountain Grove in three third and long situations on their first drive. Each time Panthers quarterback Tyson Elliott connected with Hollen Glenn. The first two catches gave Mountain Grove a first down, and the third placed the Panthers in a fourth and one situation at the Ava 13 yard line. Mountain Grove was able to pick up the first down at the 10 yard line with a three yard run by running back Brendan Rogers. Elliott would complete the drive with a touchdown pass to Rogers. Hoyt Mathews added the extra point, putting Mountain Grove up 7-0.

On their first possession of the game, the Bears were forced to punt, but the punt pushed Mountain Grove all the way back to the Panther five yard line to start the drive.

Ava on their next drive were again forced to punt the ball, and Mountain Grove put together another scoring drive. Panther running back Trenton Bevan carried the ball in to the end zone from eight yards out. Mathews added the extra point giving Mountain Grove a 21-0 lead.

On their final drive of the first half, Ava started on their own 42 yard line. On the first play of the drive, Colby Miles would carry for 16 yards. Blayne Mendel would follow up with a 12 yard run, moving the ball to the Mountain Grove 30 yard line. The Bears would use seven more rushes to score their first touchdown of the game. Bears quarterback Zach Richards carried in from one yard out with 13 seconds remaining in the half. Mendel would add the two-point conversion.

Late in the third quarter, Richards went 43 yards for the second Bear touchdown of the game. The two-point conversion attempt failed, but Ava pulled within seven points.

Mountain Grove would score their only touchdown of the second half when Vaughan caught a 60 yard touchdown pass and Mathews added the extra point with 11:32 remaining in the game.

Neither team were able to score for the remainder of the game.

The Bears had total offense of 187 yards with 175 yards coming on the ground. Richards led the Bear rushers with 80 yards on 20 carries. Miles had 41 yards on six carries; Mendel, 40 yards on 11 carries and Jacob Lireley, 14 yards on eight carries. Lireley also had a 12 yard reception.

Mountain Grove had a total of 291  yards offense with 190 of those yards through the air.

“We had our ups and downs with injuries this year, but the team kept working, and I think we got better. I’m looking forward to the future,” Sworfford stated.