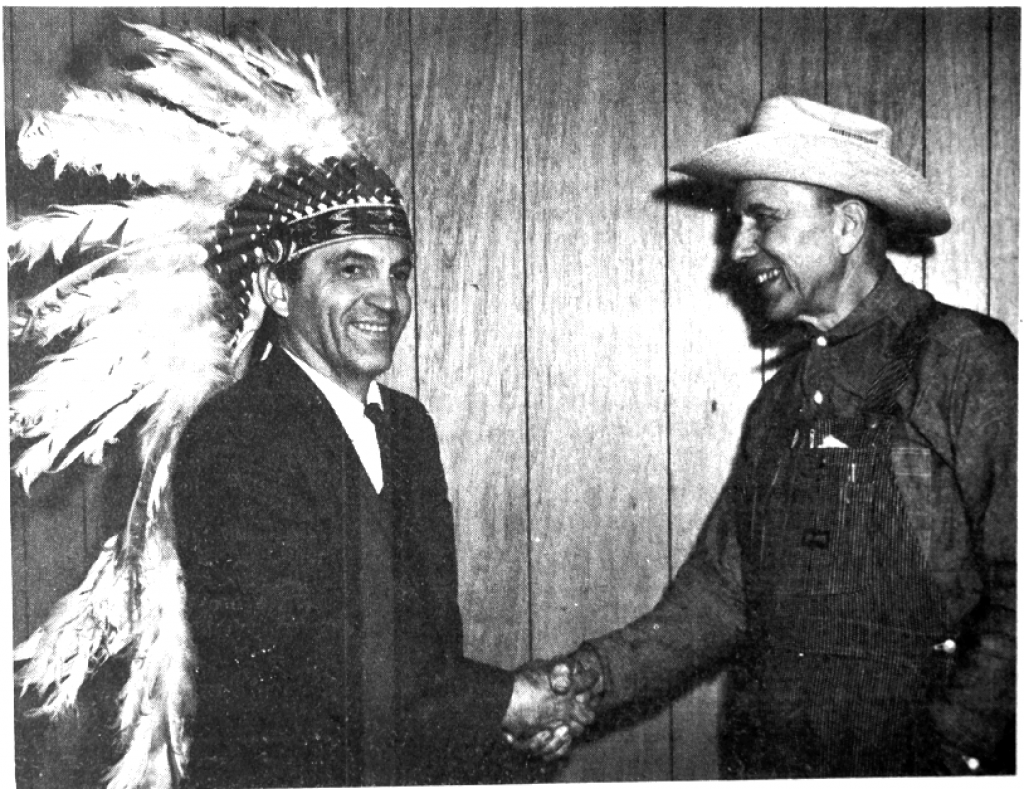 Vice Presidential candidates born at either end of the USA shake hands in Ava in 1968.

The two men could hardly have looked less alike.

One, dark complected, dimples framing a Hollywood smile, wearing a Wall Street suit most unexpectedly topped off with a full Indian headdress.

The other, a lanky grinning farmer in a full-brimmed hat, overalls, with a handkerchief peeking out of the upper pocket.

One born in Wenatchee, Washington. The other in Yonkers, New York.

And photographed shaking hands in a paneled room in Ava, Missouri.

What brought the two men together?

They both ran for Vice President on the Republican ticket in the 1968 New Hampshire primary.

The other? A local who, even though he didn’t win, beat three state governors (including one Ronald Reagan of California).

Let’s start with the out-of towner.

The suit and headdress guy.

His name was Austin Burton Jr., but – claiming partial Native American heritage – he campaigned under the name of “Chief Burning Wood.”

Prior to throwing his (borrowed) headdress into the political ring, Burton worked as a wholesale provider of promotional buttons and posters. His specialty was bawdy items displaying “clever and unprintable wit.”

One pithy journalist from the Arizona Daily Star in Tucson described Burton as “one eighth Indian and one-half serious.”

Burton spent $313 campaigning in New Hampshire before the primary, traveling in a “motorized covered wagon.” Indian friends  Princess Moon Lily and Princess Sunbeam accompanied him on the at different times on the campaign trail.

His campaign platform appealed to the “Hippie vote” and included restoration of lands stolen from the Indians, banning depictions of General Custer in films, restoration of Indian voting rights, and giving Indians the right to drink alcoholic beverages.

“Give the country back to the Indians” was Burton’s slogan.

The other guy in the picture.

Who was Laurence Smith?

His obituary describes him as a “longtime and well-known political activist”, responsible for drafting a Merit System law in Connecticut and “heading up a New York Liberty Amendment Committee.”

The obituary also lists three marriages, with the last one being to a Florida actress named Feroll Moore Pyle. After the wedding the couple “moved to their home at Squires.”

No reason for having the home in Squires is listed, nor is any local occupation for Mr. Smith.

With that said, we can learn a bit more about Mr. Smith by looking at different articles and advertisements from the Douglas County Herald:

Mr. Smith wrote a letter to the editor, taking issue with how a previous newspaper article suggested that US residents could “spend their way to prosperity”.

Mr. Smith took out an advertisement in the Herald, appealing  to the “Wise Women of our Conservative Constitutional Republic.” He suggested a Frantz Oil Cleaner would win their husbands “everlasting gratitude and an extra allowance dividend at the same time.” Readers interested in the device could contact Smith at his “Constitutional Conservative Freedom Farm” in Squires.

Mr. Smith wrote a letter to the editor, saying government was getting too involved in private business. He offered readers “a breast-pocket edition of the Declaration of Independence and the US Constitution, “underscored for quick and easy reading.”

Mr. Smith wrote a letter to the editor questioning what was going to happen in Douglas County when Federal Grant monies stopped coming in.

Smith was credited with four ribbons from the Missouri State Fair for his zucchini, yellow squash, potatoes, and beans.

Smith wrote a letter to the editor including his recipe for “Ozark Mountain Style” baked Zucchini Squash.

Mr. Smith wrote a letter to the editor to inform a “Mrs Heigham” that communism was of the devil. He provided several scriptural references.

A Herald article said Mr. Smith will represent Missouri at a meeting of the “Committee to Restore our Constitution Republic” in St. Louis.

A Herald article announced that Mr. Smith has authored a 14-page book on race relations. He purchased an ad for the book, charging 25¢ “simply for the printing and this advertisement.”

A Herald article reported that Mr. Smith had written a letter to FBI Director J. Edgar Hoover and to his Congressmen, protesting the visit of two FBI agents to his farm “seeking information about an American Patriot.”

Mr. Smith’s article demanded to know “just what crime Robert DePugh has committed.” and went on to say “This is just about the most disgraceful project the F.B.I. has ever engaged in and I demand that you advise me who has instigated this persecution.”

Editors note: according to Wikipedia, “Robert Boliver “Bob” DePugh was an American anti-communist activist who founded the Minutemen militant anti-Communist organization in 1961.”

Smith, in response to proposed legislation from Madelaine O’Hare’s effort to “eliminate all religious programs from radio and TV,” becomes Chairman of the Douglas County Sheriff’s Posse Comitatus. He invites all ministers to attend their meetings “in the interest of their congregations, while they are still permitted to have congregations under the illusion of freedom of religion.”

Editor’s note: A “posse comitatus” is a group of people mobilized by the sheriff to suppress lawlessness or defend the county.

Mr. Smith placed an ad for a 60-minute cassette tape recording of a Drury College lecture. The speaker was Robert L. Preston, author of the book “How to Prepare for the Coming (Financial) Crash,” with the recording being of a similar subject. Cost for the cassette was $3.50.

Mr. Smith’s name appears at the bottom of an advertisement for “The First Operating Ethanol Plant in South Missouri”, located at the “Old Beer Barn” on JJ highway. Another Herald article listed Smith as the “promoter” of the business and said the plant was “capable of producing 10,000 gallons of 190 proof ethanol from corn per year.”

Mr. Smith wrote his last letter to the editor, congratulating the local school board on selling property to raise funds and on its anti-drug stance.

Who was Laurence Smith?

A Christian. A farmer. A writer. Activist. Entrepreneur. Cook. Shooter of raccoons.

A guy from Squires who once lost a VP primary to a fake Indian.

But he still beat Ronald Reagan.

And we know how his story ended.

He kept at it.

Various articles described him as a ‘‘chronic campaigner” popping up as a novelty act each election year.

In 1980, he tried to pay his registration fee in “wampum,”  which was four feet of rattle snake skin.

Hart didn’t choose him. That was probably OK for Burton, what with all that monkey business going on.

In the 1990’s the costs of registering as a candidate in the New Hampshire primary went up enough to discourage Chief Burning Wood and others who mostly ran for the publicity of doing so.

From there the trail goes cold. No obituary of Austin Burton turns up in searches.

He just disappears from view.