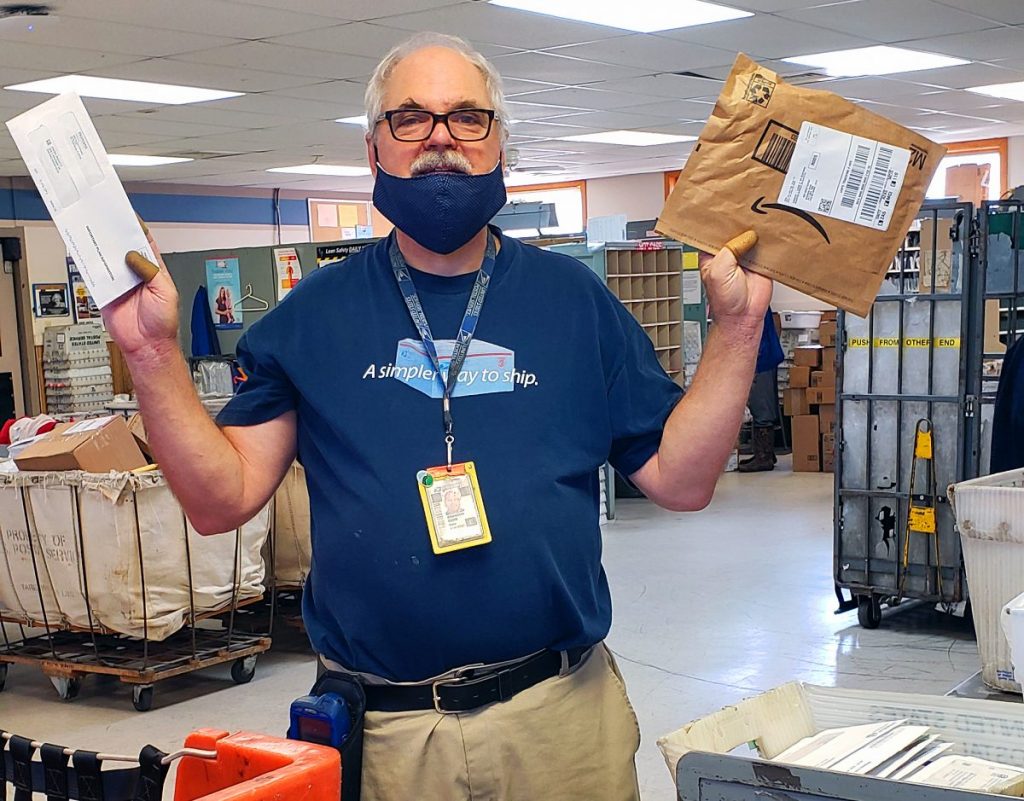 Brandon Kerr poses with some of the final pieces of mail he handled on his last day of work.

Brandon Kerr will no longer have to detour around swollen creeks, fight his way through 15 inch snows or dodge the occasional angry goose. Friday, Oct. 30 was the final day for Kerr to deliver mail to his approximately 400 customers along Ava Post Office Rt. 5.

Kerr started delivering mail in 1987 as a substitute carrier.

“I worked for just one day a week on Rt. 2 in Ava for about eight years,” Kerr stated about his first route.

After some rural postal carriers retired, Kerr stated he obtained a full-time position and served for approximately five years on Rt. 1. He served a town route for five or six years, before finishing up on Rt. 5. He delivered mail to Rt. 5 customers for 12 years.

The deliveries on Rt. 5 took him on a 115 mile trip going east on Hwy. 14 to Gentryville and working his way back to Ava. Kerr explained there is a formula of box ratio to mileage and mail volume the postal service uses to determine a routes length. There can be 350 to 600 customers on a route.

Kerr indicated the first memories he has of carrying mail was from the building across the street from the former Don Sallee Motor Company building.

“The way the mail came, it all had to be hand sorted by the clerks first to all the different routes, and then all the different routes had to be hand sorted into the case. We started, probably about 6 a.m. sorting, and were hoping to get out by 8:30 to 9. So there was about three hours plus, standing at the case and sorting mail…now they have it where everything is in order,” Kerr said.

Rural carriers will now do some sorting for safety reasons, so that they don’t have to be at a mailbox too long.

“You have some boxes alongside the road at blind curves, or over hills…and the less time we spend at a box the better. So they allow us to sort it,” he stated.

There was a lot less delivery of packages in the past.

“I might have had at the very most, 15 packages a day, that included about 500 customers. Now I had 400 customers and 10 times that much, up to 150 on a Monday, and 30 to 40 packages going to the door, which takes four or five minutes each time you get out of vehicle. It exploded last June. I had delivered more packages since June, on any given day, then I did on entire Christmas rushes,” he said.

Kerr made it through his entire postal carrier without an accident. On rural roads people many times seem comfortable going down the middle, Kerr said. The safety talks always stressed “right tight and wide left, and slow.”

“And we also have feed trucks, milk trucks, stock trailers, whatever, that just take up room and when you slow down enough and they see you, we squeeze around each other alright,” he indicated.

The rural mail delivery can also be hard on the delivery vehicles. He pointed out that the roads will wear out suspensions, tires and brake shoes. He estimates a vehicle will last about four years, before experiencing major problems. The constant stopping and starting can really do transmissions in. They may shift 1,000 to 2,000 times a day, he said.

“I change my oil every month, shocks about four months. I have really good tires. I have 10 ply, change about every five months and brake shoes about the same,” he explained.

“You hit something and then all of a sudden your oil pan is dripping, you run over a rock you didn’t see and alignment is all out of whack, deer and animals jump in front of you, electrical problems,” these are all among the potential issues a rural carrier can face Kerr indicated.

About eight years ago, Kerr switched to a right hand drive vehicle.

“They make it a whole lot simpler to reach mail boxes,” he stated.

He explained that they take a little time to get used to.

“If you don’t know or pay attention to what you are doing you can accidentally step on the gas and drive yourself into the ditch,” he said.

Kerr pointed out that there is a high demand for these vehicles, even though there is a limited market. It is common for retirees to sell their vehicles, because rural carriers are always seeking the vehicles.

“I’ve been through two ice storms, three 15 inch snow storms, a whole lot of 100 degree heat and dust and rain storms. Just the other day we had so much rain the creeks were up and I had to go 40 miles on a detour just trying to get around…one creek I always have to worry about is a 30 mile detour no matter what. One time we had an eight inch rain. Then you get into ruts being dug out of the road…slabs can get washed away. If they don’t get washed away, the slab might still be there, but you’ve got a three or four foot ditch on the side of the slab you can’t cross,” he stated.

Kerr also explains you might have what he calls “an Ozark traffic jam,” a herd of cows just congregating in the middle of the road.

“You honk at them and they just look at you, like if saying, what do you want us to do. So you just slowly move up on them, and they usually start moving away,” he said.

Kerr has found most dogs are friendly.

“Cats are funny. I always carry a bag of treats, and would give treats if I had time and sometimes they’d come up and meet me, because they knew that was what I was going to do.”

At one location a goose would regularly run along side and in front of him, apparently trying to warn him off, but Kerr indicated he was always able to make his way around the goose. On a later trip, he saw that the goose did not come out so lucky with another vehicle.

Kerr stated he has probably not met 90 percent of his former customers.

“There is one customer I took a package to every once in a while and put it on the porch. Well this last Friday (his final day of work), she came out and took the package from me and it was the first time I ever met her in 12 years,” Kerr said.

“I didn’t have anyone who would regularly meet me,” he stated.

But Kerr does remember an early meeting with a customer.

“Because I was learning the route, it took me a lot longer to know where everybody lived, let alone deliver the mail. One little old lady, always had a hard time getting down the slope of a driveway, easily in her 80s and on a cane. She was used to getting the mail at a certain time. Well, I was later. One time she came down and she said, where have you been, are you drunk, and took her cane and just wacked the side of my truck, fortunately it was an old truck and didn’t matter. And she just started carrying on about being so late and I said, I’m sorry, I’m just trying to learn the route. ‘Well learn it better,’ I was told. And as time went on I told her I will honk my horn to let you know I’ve come. And she just got the biggest smile on her face,” he recalls.

Sometimes there are little things that happen on the route that make you smile, Kerr stated.

He remembers a woman and her little girl met him at one delivery.

“The little girl just came running out to the jeep, and I was picking through the mail, and I noticed she had packages, brightly colored, wrapped packages. And when she saw them she just started jumping up and down and thanking me. I looked at the mom and said I’m going to miss this so much, because this makes it all so worthwhile for us,” he said.

Kerr doesn’t feel he will have any problems filling his time in retirement.

“I’ve got some projects at home. I have a rec room that I’m going to build that used to be a storage room. I’m going to turn it into my hobby room.”

He will include a slot car track area for his family to enjoy.

Kerr wants to remind persons to be mindful of driving the backroads and remember their mailman is out there.

“Also be kind to your mail carrier, he or she, is doing their very best to care for your mail,” he stated. 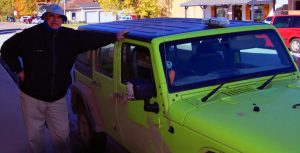 Doug Berger/Herald
Brandon Kerr with his right-hand drive jeep he used to deliver mail on Rt. 5 for 12 years. 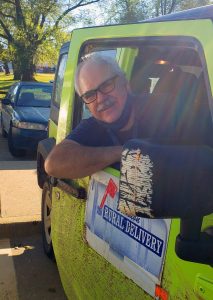 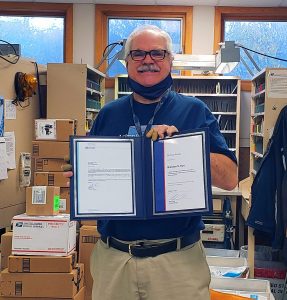 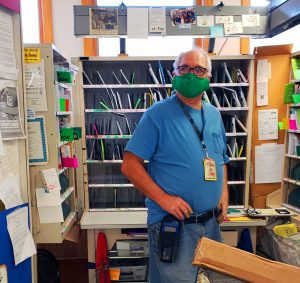