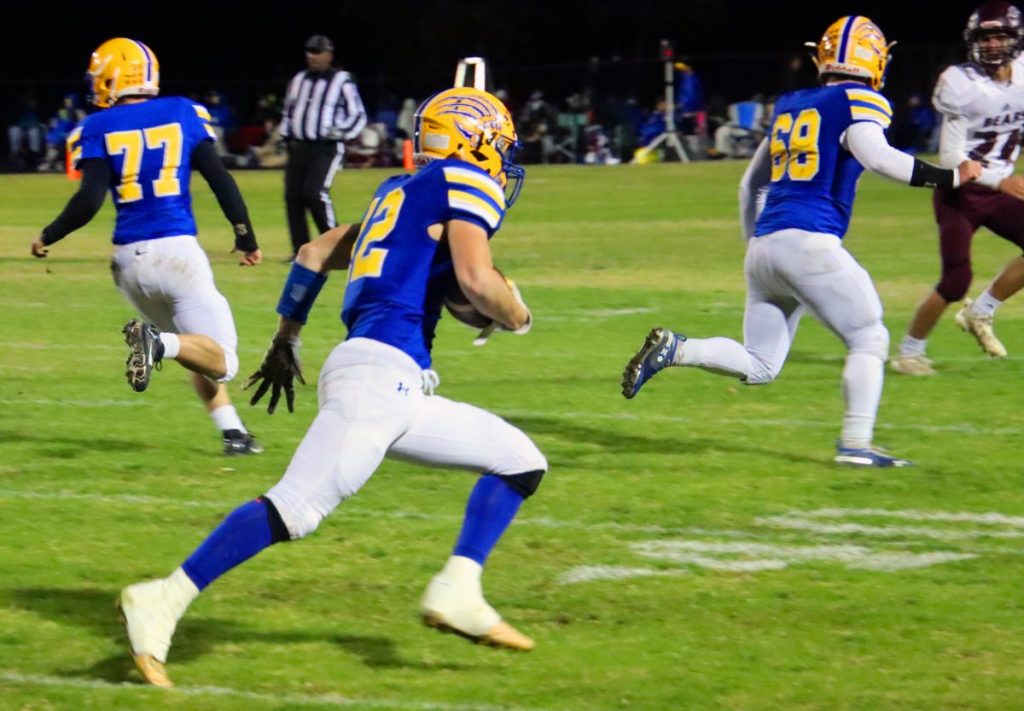 Doug Berger/Herald Ava’s Blayne Mendel took a pitch and headed up field in the conference matchup with Willow Springs. 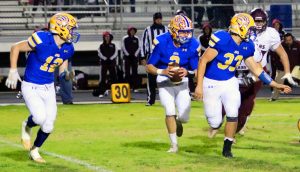 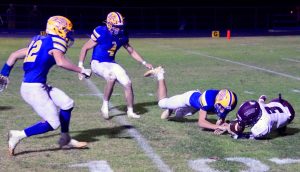 Doug Berger/Herald
Ava Bear defenders converge on a loose ball from a bad snap, which put Willow Springs deep in their own territory.

The Ava Bears football squad finished out their regular season play at home Friday with a 38-6 win over the Willow Springs Bears. The Bears take a 5-4 record into Class 3 District 5 play. Ava finished out the South Central Association Conference  matchups with a 4-3 record.

Ava finished in third place in conference play. Thayer took the top spot with a 5-0 record in the SCA. Thayer had their games with Houston and Willow Springs cancelled. Liberty posted a 6-1 record to finish second. Liberty fell in their game with Thayer, 27-0. Salem had also posted a 4-3 record in the conference, but Ava defeated Salem, 22-14, in their contest.

Buffalo has the number one seed in the Class 3 District 5 with the Bears picking up the number two seed.

Both the Bears and Buffalo will receive a bye in the first round of district play on Friday, Oct. 30. Ava will play the winner of the Mountain Grove (3-6) and Clinton (0-8) game on November 6. Earlier in the season, the Bears defeated Mountain Grove, 14-0. Buffalo (7-2) will play the winner of the Osage (3-6) and Eldon (2-5) game also on November 6.

Buffalo had edged Ava, 47-42, in the opening game of the season on the Bison’s home field.

The district championship will be played on November 13. 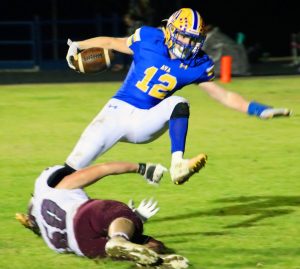 Doug Berger/Herald
Ava Bear Blayne Mendel slips out of the grasp of a Willow Springs tackler.

“I have never had a bye week. We will approach it with preparation in mind. We will most likely play Mountain Grove,” Bear’s coach Dan Swofford stated.

Ava came back strong Friday against Willow Springs, after losses in the previous two games to Thayer and Cabool.

On their second possession of the Willow Springs game, Ava put up their first six points when Blayne Mendel took the ball in from seven yards out. Mendel also added the two-point conversion.

The Ava defense did not allow Willow Springs to pick up a first down on the visiting Bears next possession and Ava took control of the ball on the Willow Springs 29.

Mendel scored his second touchdown of the game on the fourth play of the drive on a 16 yard touchdown run. Zach Richards carried the two-point conversion in giving the Bears a 16-0 lead.

With 7:13 remaining in the first half, Richards went 71 yards for the Bears third touchdown. The two-point conversion attempt failed. Ava went up 22-0.

Willow Springs ran just one play on their next drive, a 42 yard run by visiting Bear running back Scottie Osborn. Osborn led all rushers in the game with 143 yards on 20 carries. Osborn’s run had placed the ball on the Ava 18 yard line. Ava would recover a fumble on the next play at the Bear 15.  Ava would put together an eleven play drive, but a Bear fumble gave Willow Springs the ball on their own one yard line. Willow Springs was able to move the ball out to their own nine yard line, and faced a fourth and two. The Bears defense was able to tackle Osborn behind the line of scrimmage for a one yard loss.

Doug Berger/Herald
Ava defenders pull down Willow Springs runner Scottie Osborne, who led all rushers in the game with 143 yards.

Three plays later, freshman Jacob Lirley carried in from three yards out giving the Bears a 36-0 lead. Mendel would add the two-point conversion.

Ava would recover another Willow Springs fumble on the Ava 47. Ava was unable to pick up a first down, and the visiting Bears blocked an Ava punt to take over on the Ava 44.

Willow Springs was able to take advantage of the blocked punt to score their only touchdown of the game. Duddridge found Willow Springs tight end Justin Chaney in the end zone on a three yard pass. The Willow Springs kick attempt failed.

After the teams traded fumble recoveries, Ava was able to run out the clock.

Ava had 338 yards on the ground, and no passing yardage.

Richards led the Bears rushers with 136 yards on nine attempts. Colby Miles had 100 yards on eight carries. Mendel contributed 83 yards on 11 carries and Lirley had 25 yards on nine carries.

Willow Springs had 144 yards on the ground and 61 yards through the air on eight receptions.