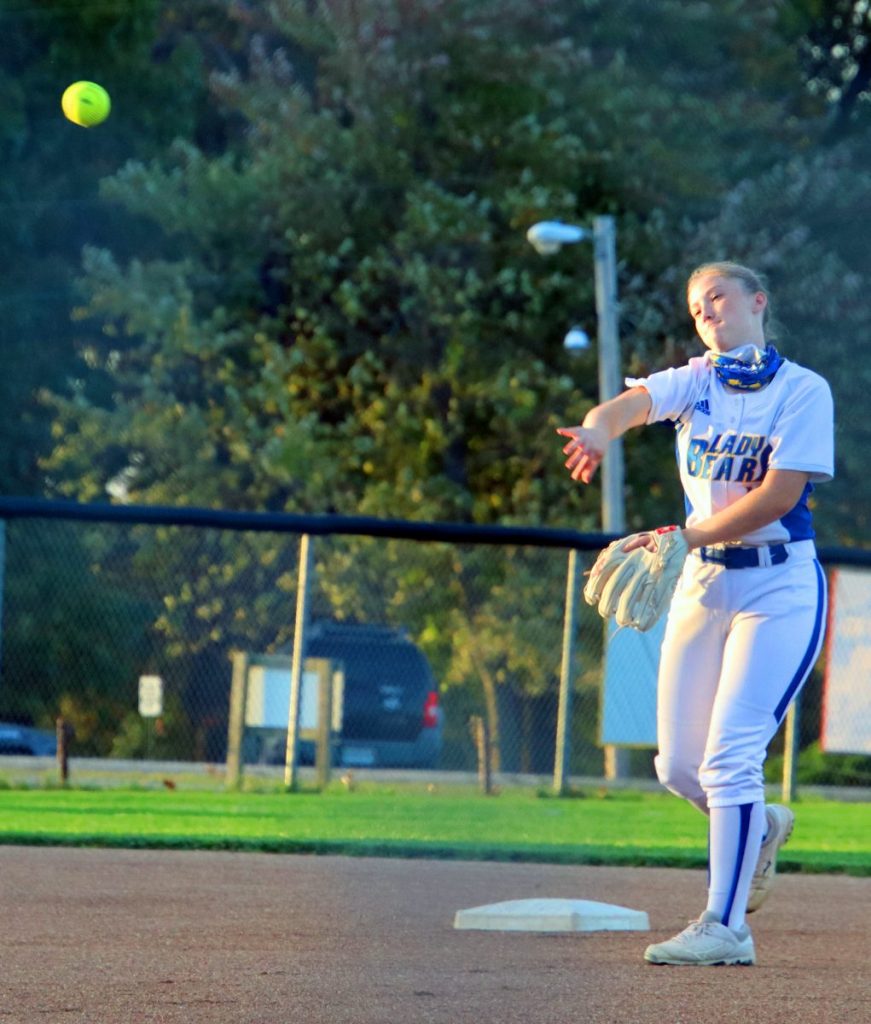 Doug Berger/Herald Olivia Gastineau feeds the ball over to first base in the district matchup with Aurora.

The Ava Lady Bears fell to Seneca in the semi-final round of Class 3 District 4 play held last week at Logan-Rogersville. The Lady Bears finished out their season with an 18-3 record. Logan-Rogersville (26-6) would capture the district championship with a 16-1 win over Seneca (4-17).

The Seneca Indians record coming into district play may not have been representative of the team. The squad faced a schedule  with many Class four and five teams.

The Lady Bears took a one run lead in the bottom of the second in the game with Seneca. Keely Akers reached on an error by the Seneca right fielder. Macee Cutbirth would single and Akers moved around to third. Akers would score on a passed ball.

Seneca tied the game in the fourth inning. The first Seneca hitter would reach on a single. A second single would put runners at first and third. A fielder’s choice brought in the tying run.

Ava recaptured the lead with a run in their half of the fourth. Miquia Heinlein doubled and Sydnee Snow came on as a courtesy runner. Snow would score on a Cutbirth single.

Seneca used a four run fifth inning to jump out in front of the Lady Bears, 5-2. An error allowed the first Lady Indian runner to reach. Three singles followed, allowing a run to score and loading the bases. An error allowed two additional runs to score. The fourth run came home on another Lady Bear error.

Seneca came back in the sixth with three more runs. The Lady Indians leadoff hitter in the inning doubled and moved to third on a sacrifice bunt. A single scored the first run of the inning. The next Seneca hitter doubled, scoring another run. Another single would bring home the Lady Indians eighth run.

Julia Henry was in the pitching circle for the Lady Bears the full seven innings.

The Lady Bears had defeated Aurora, 11-1, in the opening round of district play last Wednesday.

Ava recorded 14 hits in the five inning, ten run rule game. The Lady Bears were sending the ball to the wall throughout the game, and Olivia Gastineau sent a high fly ball over the left field fence during a five run fourth inning.

The Lady Bears put their first three runs on the scoreboard in the second inning. Akers would triple and  Cutbirth doubled her home. Cutbirth would advance to third on a dropped third strike, and Rowe would reach on the passed ball. An Aurora error allowed Cutbirth to score and Kaelyn Stillings to reach base. A fielder’s choice forced Rowe at third. Olivia Gastineau would double home Stillings.

An Aurora single and double to lead off the third inning would bring in their only run of the game. Ava responded with two runs of their own in the bottom of the inning. The Lady Bears put three singles together to score the first run. Heinlein, Akers and Cutbirth singled. Rowe would bring in the second run with a sacrifice fly.

With one out and a runner on with a walk, Ava ended Aurora’s fourth inning with a double play. Henry fielded a ground ball, turned and threw to shortstop Olivia Gastineau covering second. Gastineau completed the double play with a throw to first.

The Lady Bears added to the defensive play in the inning with the five runs they would score to take a 10-1 lead. With one out, Olivia Gastineau connected for her homerun. Lexi Gastineau would line out to the third baseman. Four back to back singles by Henry, Heinlein, Akers and Cutbirth and a Rowe double would bring in the runs.

Ava scored their final run in the fifth when Henry singled and courtesy runner Sydnee Snow stole second and third. She would come home on an Akers double. Akers went four for four in the game. Cutbirth was three for three with three RBIs. Rowe also had three RBIs in the game.

Henry was in the circle for the complete game with seven strikeouts.