The Ava Bears football squad fell to the Cabool Bulldogs, 34-18, in a frustrating night for the Bears in corralling onside kickoffs.

The Bears saw Cabool successfully recover an onside kick off three times in the first half.

The Bears only allowed Cabool to take advantage of the onside kick recovery one time, but the Bulldogs were able to use their other two possessions to lengthen the field for the Bears.

“The onside kick recoveries put us in the hole. They had a good passing game. We didn’t make the plays and they did,” Bears coach Dan Swofford stated.

Ava’s offense generated more yards in the game than Cabool. Ava had a total of 348 yards offense with 285 of the yards coming on the ground. The Bulldogs had a total offense of 290 yards. The majority of the Cabool offense came through the air with 163 yards on nine receptions and three of their touchdowns.

On their kickoff, Cabool recovered their first onside kick. The Ava defense was able to stop the Cabool drive, but the Bears were forced to start their next possession from their own five yard line following the kickoff.

The Bears were forced to punt the ball back to Cabool, and the Bulldogs started their next drive from their own 48 yard line. Seven plays later, including a 34 yard completion from Flanagan to Primanzon, the Bulldogs Daniel Hutcheson carried in from one yard out and Swisloski again added the extra point.

Cabool would follow up their second touchdown with another onside kick recovery. The Bears defense again forced Cabool to give up the ball. But the Bulldogs had pushed the ball to the Ava 32 yard line before turning the ball over on downs.

The Bears would use two big running plays to put together a three play scoring drive.

Colby Miles opened the drive with a 33 yard run. After Jacob Lirley moved the ball eight yards, Blayne Mendel worked his way through the Cabool defense for a 27 yard touchdown run. The Bears two-point  conversion attempt was unsuccessful.

Cabool was able to score their third touchdown on their next possession. They took possession of the Bear’s kickoff on their own 42 yard line They had moved the ball to the Ava 11 yard line, but faced a fourth and six. Flanagan was able to find Dakota Schwenk in the end zone for the touchdown. Cabool tacked on the extra point for a 21-6 lead.

When the Bulldogs recovered another onside kick off, they were able to take advantage of the recovery for their fourth touchdown of the game. This time Flanagan again found Schwenk for a 20 yard touchdown pass. The successful extra point gave Cabool a 28-6 lead.

After the teams traded possessions, Ava used an 11 play drive to score their second touchdown with 4.3 seconds remaining in the first half. Bears quarterback Zach Richards threw an eight yard touchdown pass to Caden Lee. The Bears failed to convert the two-point attempt.

Ava received the second half kickoff, but four plays later fumbled the ball and Cabool recovered on the Bulldog 17 yard line.

The Bears defense again stepped up and kept Cabool from taking advantage of the turnover.

Ava started their next drive at their own 37 yard line following a Cabool punt. The Bears had driven to the Cabool four yard line, before the Bulldogs picked off a pass and returned it to their own 15 yard line.

Cabool would score their final touchdown with 4:26 remaining in the game. The score came after the Bulldogs had taken over on downs on the Ava 33. Schwenk went 33 yards on the ground for the touchdown. They failed on the extra point kick attempt.

Ava responded with a nine play drive, which had Richards scoring on the ground from three yards out with 2:08 remaining. The two point conversion attempt failed.

Cabool was able to run out the clock for the win.

Mason Cole and Brett Coonce each had 12 tackles in the game. Brody Tidwell had eight tackles. Mendel and Jacob Lakey each had five tackles. 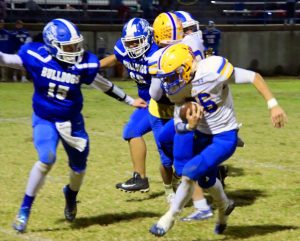