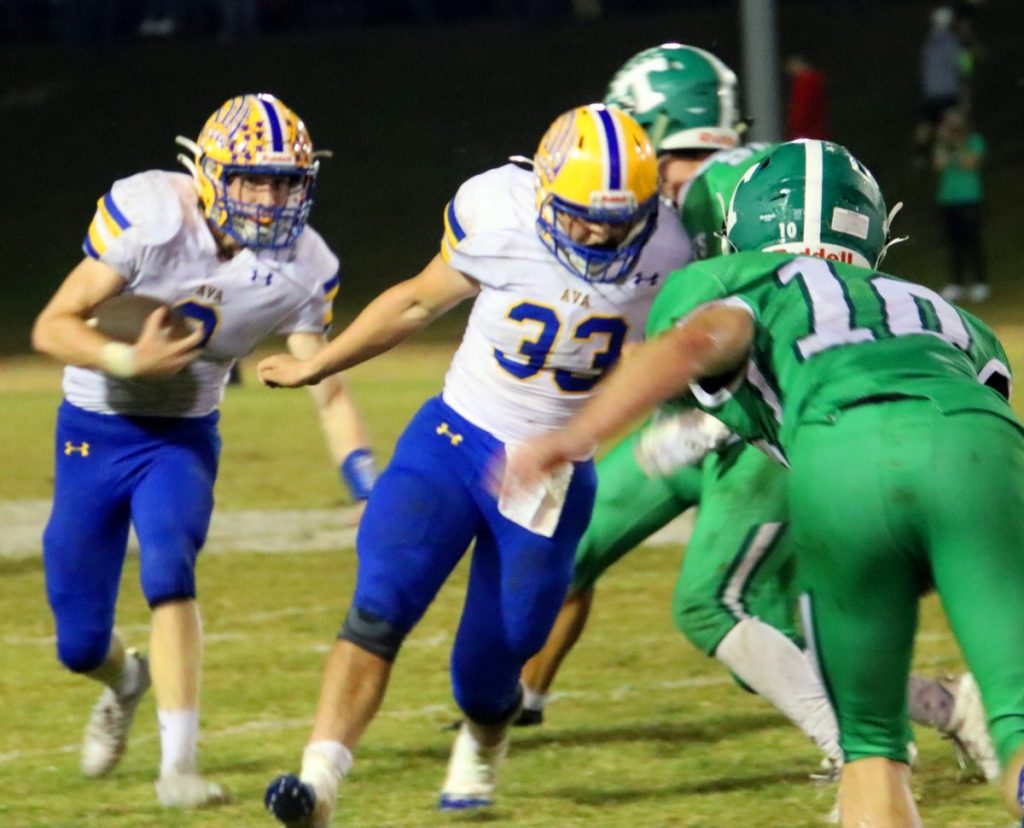 Ava may have fallen to the host Thayer Bobcats, 43-6, on Friday, but the Bear defense kept the Thayer ground game in check for the majority of the contest.

The Bobcats picked up only 98 yards rushing with 36 of those yards coming on one play, but they did their scoring through the air with four touchdown receptions.

Thayer received the game opening kickoff on the rain dampened field, but failed to pick up a first down and punted the ball to Ava.

The Bears took possession of the football on their own 10 yard line. Ava was playing without senior fullback Zack Miller and junior running back Spencer Skyles. They both suffered injuries prior to the game. Miller has a knee injury and Skyles a shoulder injury. Freshman Jacob Lirley stepped in to play fullback in the game.  Bear’s coach Dan Swofford credited Lirley with doing a good job in the varsity start. Lirley had 37 yards on 12 carries in the game. Ava was also unable to move the ball on their first possession and punted the ball back to the Bobcats.

On the punt, Thayer was able to return the ball to the Bears 16 yard line. On a fourth and four from the Ava 10 yard line, Bobcat quarterback Jayce Haven found Jordan Madden for a touchdown. The Thayer extra point attempt was no good, and the Bobcats went up 6-0.

On their second possession of the game, the Bears put together a nine-play drive and had pushed the ball to the Thayer 18 before turning it over on downs on a fourth and four falling just inches short with 1:40 remaining in the first quarter.

Thayer kept the ball on the ground until the Ava 32 yard line, before Haven connected with Lane Grimes for a passing touchdown. Haven would carry in the two-point conversion and Thayer was up, 14-0, early in the second quarter.

An Ava turnover gave the ball back to the Bobcats on the Ava 35 yard line. Thayer used just one play to score their next six points. Haven again connected with Madden on a 35 yard touchdown pass. Thayer tacked on the extra point kick to hold a 21-0 lead.

Thayer would take a knee to end the half with a 21-0 lead.

The Bears would take the second half kickoff, but were forced to punt ending the drive. Ava recovered a fumble on the punt return at the Thayer 28. The Bears couldn’t take advantage of the turnover and gave the ball back to the Bobcats on downs at the Thayer 32. Ava’s defense allowed the Bobcats just two yards on this possession and Ava took control of the punt at their own 35 yard line.

A fumble gave the ball back to the Bobcats at the Ava 26. Thayer was able to take advantage of the fumble and scored on a four yard touchdown pass from Haven to Madden. The Bobcats again added the extra point taking a 28-0 lead.

On the kickoff, a Thayer personal foul put the ball on the Ava 37. But an interception four plays later gave the ball back to the host squad. But this time the Ava defense did not let them take advantage of the turnover, and the Bears started a drive at the Thayer 28 after a Bobcat punt. Bears quarterback Zach Richards would later score on a 36 yard run. Ava’s two-point conversion attempt failed.

Thayer returned the kickoff to their own 45. On the next play, Madden carried to the Ava 19 yard line. An Ava facemask penalty on the play moved the ball to the Bears nine yard line. Two plays later, Madden would carry in for a touchdown. The Bobcats added the two-point conversion on a pass with 6:28 remaining in the game.

On the first play from scrimmage after the kickoff, Ava fumbled and Thayer took over on the Ava 13. The final Thayer touchdown would come on a four yard run by Haven. The Bobcats added the extra point for the win.

The Bears had 196 rushing yards in the game while holding Thayer to 98 yards on the ground.

Richards led the Ava rushers with 88 yards on 22 carries. Lirley had 37 yards on 12 carries; Blayne Mendel, 36 yards on seven carries and Miles, 35 yards on six carries.

Ava will travel to Cabool next Friday to take on the Bulldogs with a 4-3 overall record and a record of 2-2 in the conference. Cabool fell to Liberty, 14-6, in Friday night play.

Cabool is a solid team that likes to throw the ball, Swofford indicated.

Buffalo remains on top of the Class 3 District 5 teams with a 5-2 record. The Bears fall into the second position. Mountain Grove and Osage both have 2-5 overall records followed by Eldon (1-5) and Clinton (0-6).