It has been over 40 years since a group of individuals with an interest in the arts came together to form an organization which later became the Ava Art Guild. The art guild was formally incorporated in 1990, but had been in existence for 12 years prior to that date.

“The organization is primarily interested in representational art, and especially the quality with which it is executed. Work in all mediums is encouraged-oils, watercolor, pen and ink, pastels, acrylics and sculpture,” early promotional material indicated.

Today the organization has artists working in a wide range of mediums and materials. Painting in various mediums is still probably the most widespread area pursued among the members of the art guild. The painting can be in various mediums and on varied materials, including conventional canvas, rocks, gourds or feathers. Along with the painting, members also work in metals, ceramics, woodwork, needlework, jewelry and other areas. Many of the works are exhibited at the gallery during regular hours and during regular exhibits held during the year.

The reasons persons have joined the art guild and what they hope to receive from their membership varies.

“The mission is probably different to each one of us,” guild member Rita Fancher stated.

“This area has so many creative people, something brings it out. I also like the way we encourage beginners,” she added.

“It’s good for the kids. It gives them encouragement,” Donna Howard, another early member of the guild, stated.

“Encouragement is a big element of the mission,” Fancher said.

Long time guild member and former middle school art teacher Regina Robertson stated the organization also allows for a connection to be developed with other artists in the community.

“People join to communicate with each other. Also they have a place to display their work,” Fancher stated.

“Every month we have a meeting and at every meeting we have some kind of project that everyone can do to the best of their abilities. Last month was cardboard roses,” Robertson stated.

It was pointed out that many times with these projects at the meetings, people are working with an art form they are not familiar with. This gives them a chance to see if they would be interested in this type of art, Howard pointed out. Next month there will be a painting demonstration. During the demonstration, if they are also doing a painting project, the instructor will be assisting those in attendance. Along with the instructor, assistance is also many times available from other members of the guild with experience in the area.

A beginner, who has never done it before can do it, and the more advanced can proceed further, Fancher indicated. If someone came in the door with no background in art, the guild members would assist them in getting started, Robertson stated.

The attendance at the meetings can vary depending on the topic and time of the year, Robertson stated. There would be times the room would be full with 35 to 40 people, she added.

“People really like to see Rita paint. Of all the workshops we have, they want to paint,” Robertson said.

Painting is the most asked for activity, she stated. Acrylics may be the most popular painting medium, Robertson said. Part of this attraction to acrylics is because the use of acrylics can be the least expensive, she added.

“And acrylic works on so many different surfaces. I paint rocks with acrylic,” Fancher said.

“I paint turkey feathers with acrylic, and acrylic can be a watercolor if you thin it down,” Robertson explained.

But along with painting demonstrations, other artists conduct workshops in other areas.

“They go in all different directions,” Robertson said.

She pointed out among these different topics have been meeting projects on jewelry, miniature dolls, and ceramics. They try to develop the workshops in a manner to allow all to participate.

“Everyone tries it out to see if they want to do it, basically,” Howard added.

“That’s the beauty of the workshop. Someone who has never done it can try it,” Fancher said.

Fancher added that you don’t have to be a member of the organization to attend the workshops. The workshops are usually open to the general public at no cost.

Many times those attending the sessions have become members.

“Someone pointed out last year that other organizations were losing membership, but our numbers are increasing,” Fancher stated.

But she also indicated that in like many groups, you do have a core of members who attend the meetings and participate in the organization activities.

“Our membership is also getting a little older,” Robertson laughed.

The organization does not have a formal recruiting effort for younger members, Fancher stated. But the guild has held a summer camp for kids, and has a youth division within the art exhibits.

With children there is a tremendous range of abilities, Fancher explained.

In the judged exhibits, the judges take a different approach with youth exhibitors.

“So the judge, instead of judging their works against each other, judges each piece on its own merits. Each one gets a ribbon, and that encourages the younger ones,” Fancher said.

The organization currently have no artists working with electronic art forms, but this is one area which may attract a younger artist.

“Some kids will eventually do it,” Robertson stated.

The definition of art for the group is broad and includes what some might consider crafts. But what many consider a craft is really also an art form, Robertson stated.

Fancher pointed out as an example, the guild has developed an informal affiliation with an area quilting group.

“I think a quilt can be an art form. If you take anything and you put yourself into it. Your own creativity. Art is personal. I used to think art was just the art museum, but now it’s more, especially in the Ozarks. You can take a stick and carve it and that is a piece of art. You can take a rock and you paint on it and that’s a piece of art work, as long as it makes you feel good or the viewer feels something,” Robertson said.

Fancher stated they try to feature art which has original design, but they recognize people have to learn and many times this learning involves copying other works of art.

“A lot of times beginners copy more than people who are more experienced,” Howard added.

“I told my kids at school. Most of you will not be professional artists, but you are all art appreciators. From the material you choose for your couch, to the clothing you wear, to the colors you love, you are appreciators of art,” she stated.

“A lot of people think my snowmen are crafts, but I consider them to be a creation, because I go find the material, make patterns. They are my own designs. I had to design that great big hat for that snowman and make sure it fits,” Robertson said.

“You can think of a woodcarver as a craftsman, but they design from 360 degrees,” she added.

Some of the art works in the guild gallery are for sale. Some of the guild members try to sell their art, Fancher stated.

“Some do it for the sake of doing it, and if it sells that is a bonus,” she said.

“We have people who sell a lot of their work,” Fancher said.

But many times the price on one of the artworks don’t really account for the hours put into its creation, she added.

The guild also has several members who have received the designation of “Best of Missouri Hands,” and one member has made a living with artwork.

The garden adjacent to the guild’s gallery building has also been an important community contribution.

“This garden out here is one of our big achievements,” Howard stated.

“And I feel it is also a form of art,” Francher added.

Covid-19 has had an effect on the operation of the organization this year like most other organizations. They closed the gallery and meetings for several months, and now have been limiting the meetings to 15 members.

Now the gallery is again open and an exhibit will be held October 14-24. The gallery’s hours are Wednesday through Saturday from 10 a.m. to 4 p.m. 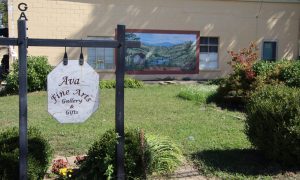 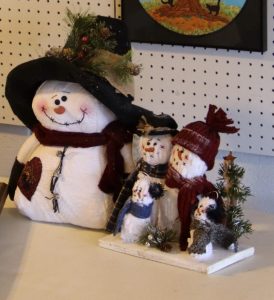