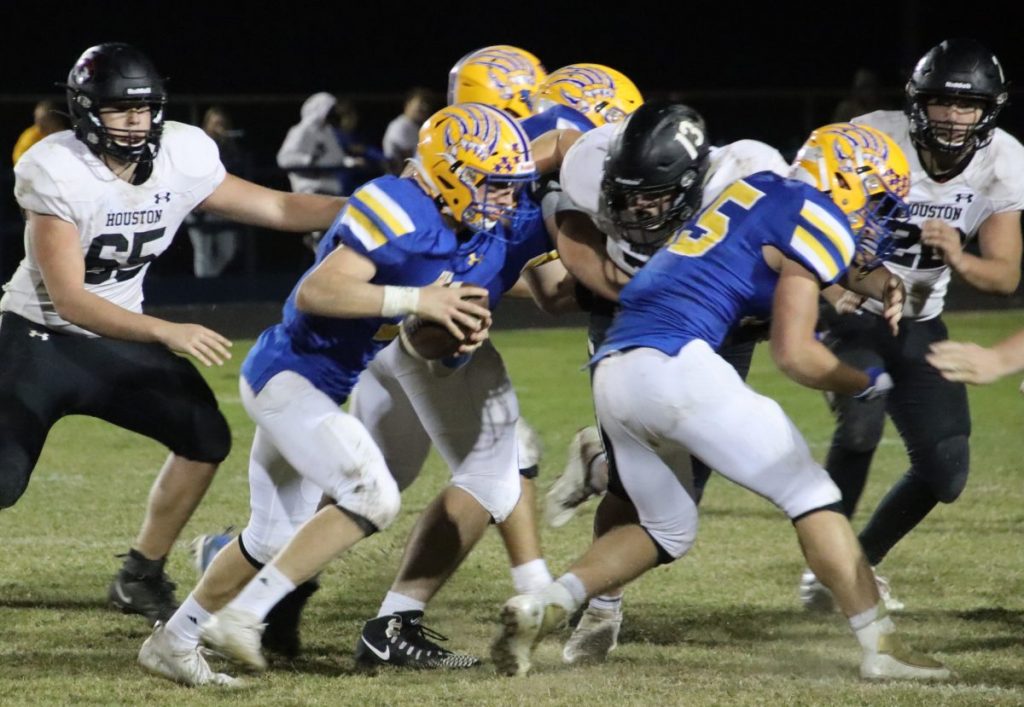 Doug Berger/Herald Bears quarterback Zach Richards follows the block of running back Zack Miller around the edge in Friday night’s game with Houston.

The Ava Bears football squad celebrated their homecoming game with a 22-8 win over Houston. The win gives the Bears an overall record of 4-2 and they are now standing at 3-1 in the South Central Association Conference.

Both teams started fast offensively, but the offenses were only able to put one touchdown on the scoreboard in the second half. Neither team broke 200 yards in total offense. Ava had a total of 199 yards on offense with 119 of those yards coming on two plays.

Ava’s defense came up with timely turnovers throughout the game to stop any Houston threats.

“The team stayed in the game, and had grit, playing hard,” Bears coach Dan Swofford stated.

Swofford stated it seemed hard for the team to develop a rhythm in the game.

Houston opened the game’s scoring and scored their only points on their first possession. The Tigers took possession of the ball after the kickoff on their own 43 yard line. Houston stayed on the ground for the entire 12 play drive to score from four yards out when Bailey Hurst would carry in for the touchdown. Hurst would also score on the ground for the two-point conversion giving Houston an 8-0 lead.

The Tiger lead did not last long. Ava started their first possession on their own 29 yard line. Blayne Mendel would take a pitch from Bear quarterback Zach Richards and find Payton Evans on a 79 yard touchdown pass on Ava’s first play. The Bears failed to convert on the two-point attempt.

Houston was able to run only one play on their next possession, before Ava forced a fumble and the Bear’s Jacob Bruffett recovered the ball on the Houston 40.

The Bears were not able to take advantage of the turnover and turned the ball back over to Houston on downs on the Houston 37. But another Bear take away came on Houston’s first play from scrimmage.  Evans pulled in another pass, but this one came from the Houston quarterback. Evans would return the ball to the Houston 28 yard line setting up a two-yard touchdown run by Zack Miller to give the Bears a 12-8 led. Again Ava failed to score on the two-point attempt.

Houston came back with another long drive, taking up over six minutes of the second quarter. The Tigers were on the Ava eight yard line, when the Bears continued their big play evening. This time Mendel intercepted a Houston pass at the two yard line and returned it back out to the Ava 43 with just under two minutes remaining in the half.

The half end three plays later with Ava taking a 12-8 lead into the locker room.

Ava received the second half kickoff, but were forced to punt it away to Houston.

The Tigers started in Ava territory at the Ava 40 yard line, but the next series proved very costly to the Houston squad. The Tigers had already lost 220 pound lineman Brady Brookshire to injury. Houston senior quarterback Ty Franklin gained 17 yards for the Tigers, but received an injury which took him out of the game. Freshman Wyatt Hughes was forced to come on the field as quarterback. On the next play, the Tigers suffered the loss of running back and linebacker Hurst. Houston was able to drive to the Ava 13 before turning the ball over on downs with 5:43 remaining in the third quarter.

Two plays later, with the Bears on their own 16, Ava quarterback Richards went 84 yards and crossed the goal line for the first of three times during the game. But this run and another later in the evening saw the touchdown nullified and the ball brought back on a holding penalty.

Ava would be forced to punt the ball away with the Tigers taking over at their own 46 yard line. Houston would put together a nine play drive and move the ball to the Ava 38 before turning the ball over on downs. The Bears moved the ball to the Houston 28 before a penalty backed them up and two plays later forced a punt. A penalty on Houston put the ball on the Houston six yard line. Another Tiger penalty backed them up to the three. Houston was able to push the ball back out to the eight yard line before Mendel and Colby Miles converged on the freshman quarterback in the end zone and sacked him for a safety.

With a 14-8 lead, Ava took the safety kick and started their drive at the Houston 42. Two plays later, Richards went 40 yards for a touchdown and also carried the two-point conversion across the goal line. The Bears kept the margin for the remaining 3:29 of the game. Ava did threaten again when Richards broke free for a 37 yard touchdown only to have the score brought back on a holding penalty.

Richards led the Bear rushers with 74 yards on 14 carries. Miller had 37 yards on 11 carries.

Ava will travel to Thayer Friday to take on one of the top Class 1 teams in the state. Thayer 4-1 overall is 3-0 in the conference. Their game with Houston was cancelled because of Covid concerns. Last week they defeated Cabool (4-2) (2-1) 27-0.

“Thayer is a great football program that plays hard nosed defense. They will run the football,” Coach Swofford stated. 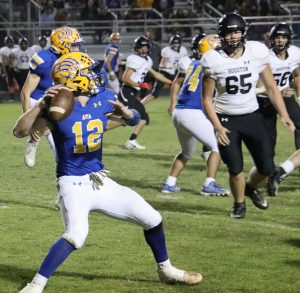 Doug Berger/Herald
Blayne Mendel sets to release a pass to Payton Evans for a 79 yard touchdown. 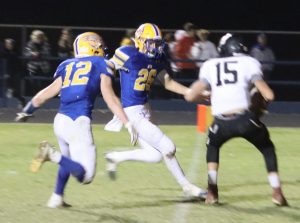 Doug Berger/Herald
Ava Bears Blayne Mendel (12) and Colby Miles (26) converge on the Houston quarterback in the end zone for a safety.