Ava quarterback Zach Richards breaks through Salem defense on his way to Bears first touchdown in conference win over Salem on Friday.

The Ava Bears tallied their second South Central Association Conference football win when with two seconds remaining in the game, Bears quarterback Zach Richards dove for the end zone pylon to score the game winning touchdown. Ava came away with a 22-14 win, and improve their overall record to 3-2. The Bears are now 2-1 in conference play.

On Salem’s first possession of the game, they drove to the Ava four yard line and faced a fourth and goal. Salem senior running back Caden Camden, who had run for 80 yards of the Tigers’ 91 yard drive, was given the ball again, but the Ava defense stopped him for no gain and the Bears took over at their own four yard line.

The Bears moved the ball out to their own 18 yard line, but a holding penalty pushed the ball back at the eight yard line. Zack Miller got back five of the yards for Ava, carrying to the 13. The Bears would lose the ball on an attempted pitch and Salem would recover on the Ava two yard line. Two plays later, Salem scored the first touchdown of the game and added the extra point to go up, 7-0, with 1:02 remaining in the first quarter.

Ava responded with a touchdown drive on their next possession. The Bears took possession of the ball on their own 38 yard line, and put together a ten play drive capped off with a 20 yard touchdown run by Richards. A holding penalty on the two-point conversion attempt, moved the ball back to the Ava. 13. Ava attempted to pass on the two-point conversion and Salem picked it off in the end zone.

The teams traded punts, before Ava took over on their own 15 yard line. On the next play, Ava’s Spencer Skyles went 85 yards for a touchdown, but the play was brought back on a penalty for a block in the back. Two plays later, Richards connected with Mason Cole on an 84 yard touchdown. Skyles added the two-point conversion to give the Bears a 14-7 lead.

“We had come out a little flat again in the game, and the catch by Mason Cole was a real turning point,” Bears Coach Dan Swofford stated.

The Tigers did come back to tie the game with 6:17 remaining in the third quarter. Camden carried in from 26 yards out for the touchdown. Salem had 223 yards total rushing in the game with the senior 5’4”, 135 pound running back Camden accounting for 221 yards.

The Bears took possession of the ball following the Salem kickoff on their own three yard line. Ava put together a 14 play drive which had the ball on the Salem 15 before they gave the ball up on downs.

Salem was unable to move the ball and punted. Ava again drove into Salem territory. The Bears faced a fourth and five with 5:16 remaining in the game on the Salem 25. A pass fell incomplete and Salem took over on downs.

Ava again forced a punt, and took over at their own 19 yard line. They would put together a 10 play drive, before Richards would score the winning touchdown. Blayne Mendel started off the drive with a 30 yard run, which put the ball on the Ava 49. Miller carried twice for six yards and Colby Miles picked up the first down with a five yard run. A Mendel run picked up another six yards. A Richards to Mendel pass gave the Panthers a first down on the Salem 29 with under 30 seconds remaining in the game. Richards would run for seven and connect with Miller on an 11 yard pass to put the ball on the Salem 11 with 12 seconds remaining on the clock. Richards would then pick up the winning touchdown as he spun away from being forced out of bounds and reached for the pylon.

Mendel tacked on the two-point conversion to put the Bears up 22-14.

Salem took the kickoff but was not able to lateral the ball around enough to break away, and the Bears secured the win.

“The team responded well when they were down a little,” Swofford stated.

He credited the offensive line with playing well in the game.

Richards had 113 yards passing on eight attempts. Cole had a catch for 84 yards; Miller two catches for 23 yards and Mendel had a reception for six yards.

Salem completed no passes in the game.

The Bears will host Houston next week for homecoming festivities.

Swofford stressed it would be important for the team to stay focused during the homecoming game. He stated that since Houston has had their last two games canceled it will be interesting to see if the team comes out rusty or rested.

Covid issues have canceled the last two games for the Houston Tigers. Last week they had been scheduled to play Thayer. 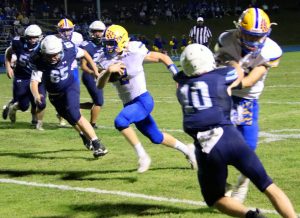 Bear running back Spencer Skyles looks for an opening in the Salem defense.