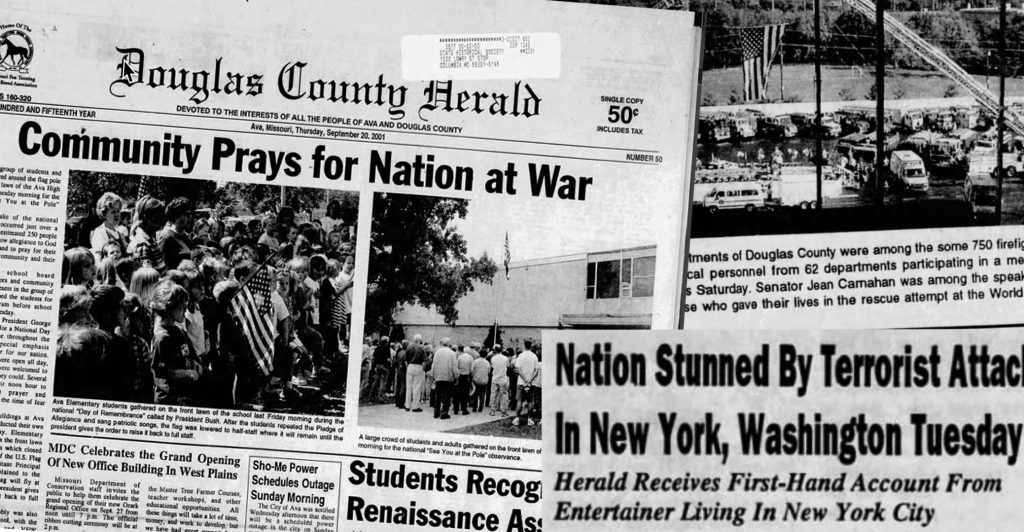 Headlines from the Herald in September of 2001.

It has been almost 19 years since two planes struck the World Trade Center towers in New York, a third plane the Pentagon in Washington D.C. and a fourth crashed in a Pennsylvania farm field after passengers on the plane resisted the hijack attempt. Even with this passage of time, most people can still remember where they where when they first heard of these events.

The attack resulted in almost 3,000 fatalities and thousands more injuries.

Douglas County library director Anita Dodd remembers she was at her mother’s house on vacation. They had just turned on the television and as soon as they turned on the TV they saw the planes hit the towers.

“I was sitting in the office and mom called and said she was watching TV and planes hit the towers,” Douglas County Assessor Alicia Degase remembers.

She also remembers late in the day the courthouse was locked down, and the sheriff was in the hallway outside the offices, because there had been some threats. She recalls that there was a sense of sadness on the day.

Mike Dodson, a field staff member with the assessor’s office, remembers at the time he was working at Emerson’s and they had a television in the cafeteria area. It was a horrible thing, even in the cafeteria people were crying.

The Douglas County Herald in its Sept. 13, 2001 edition carried a first hand report of the terrorist attack. The Herald received the account from an entertainer living in New York city who had a local connection. The Herald reported Barbara Letsinger of rural Ava had sent an email to her cousin, Camille Gifford, an entertainer in New York.

“It was not long until Letsinger received a message back from Gifford telling of the horror that gripped the city,” the Herald reported.

The Herald contacted Gifford and reported they received this email.

“I am exhausted tonight. I’ve had the TV on all night and watched the coverage. It is a terrible tragedy and everyone is in the state of shock at this time. We have just discovered we lost the chief of the fire department and many other high ranking firefighters who were in there immediately after the first plane hit the first tower,” the email indicated

“I managed to get out of my building at 12:30 p.m. The chaotic running of people had stopped so the head of our company determined it was safe for us to leave the building, a gray dust was falling over everything and many were walking with masks and scarves over their faces to breath. It was a huge exodus of people leaving the lower part of Manhattan, all in shock,” Gifford said in her email to the Herald.

While in the county clerk’s office of the Douglas County courthouse, Lance Stillings and Ashley Pierson, both remember the  high school class rooms they were in when the events were unfolding. Pierson remembers she was in music appreciation class and Stillings in a history class. They watched the reporting of the events on televisions in the school. Stillings remembers concerns gasoline prices could increase. Prices did increase in many locations for a short period.

Dwayne Davis, Davis Tire & Wheel, recalls he was working construction in Branson at the time and one of the superintendents had heard it on the radio and told them.

Two Missouri Fox Trotting Horse Breed Association employees, preparing for this week’s celebration at the Ava grounds, also remember where they where when they heard the news. Tammy McFarlin remembers that at the time she was working at the Lee Factory in Springfield and was listening to KTTS when they broke in and announced the attack. Cathy Lansdown recalls she was working at the Foxtrotter’s offices  and hadn’t watched the news prior to coming to work. When she came in others had the TV on and were watching the events being reported.

Each year the lives lost and heroic efforts at the scenes of the attacks have been recognized across the country. Permanent memorials can also be found throughout the United States.

Included among these recognitions is the 9/11 Springfield Area Memorial Stair Climb. The eighth annual stair climb will be held on September 11 and 12 and will be held virtually this year due to the coronavirus situation. Firefighters and civilians will participate in the event to honor the over 300 members of the New York Fire Department who died on September 11, 2001.