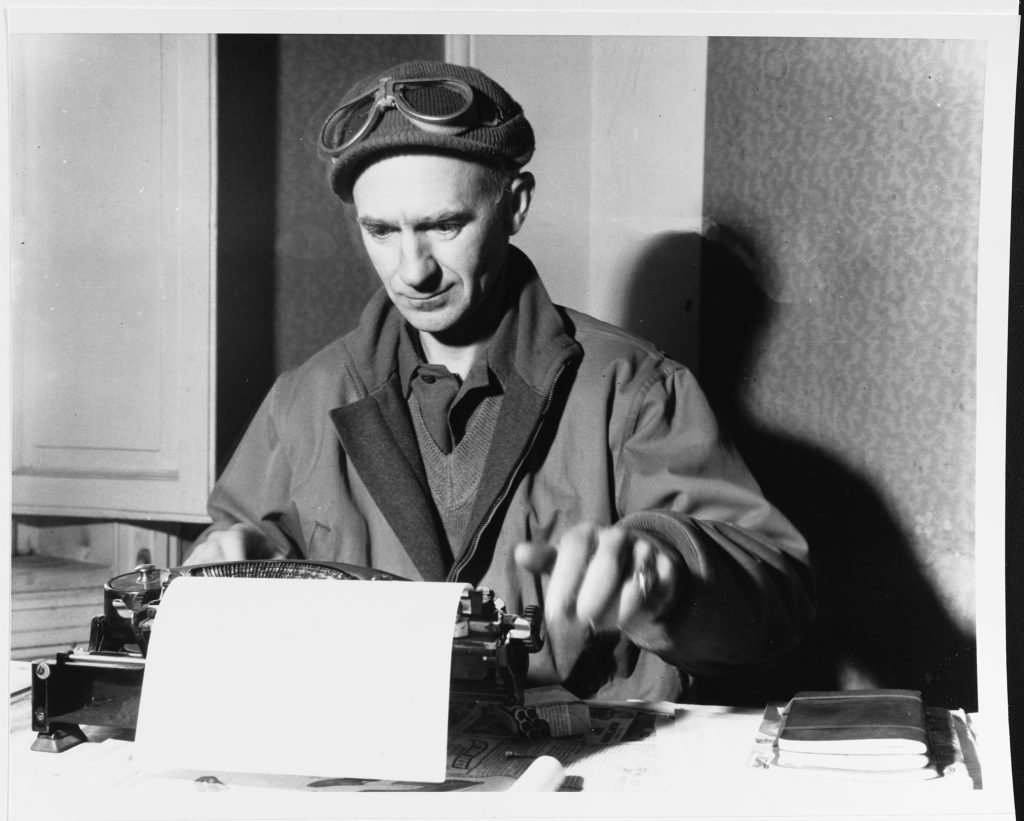 Editor’s note: On September 2nd, 1945, at just after 9 a.m. Tokyo time, officials from 10 countries assembled on the USS Missouri to witness the formal surrender of Japan to the United States, ending World War II.

To commemorate the 75th anniversary of the event, we present the bio of and an article by Pulitzer-prize-winning war corespondent Ernie Pyle.

In 1945, the Douglas County Herald carried what turned out to be the last of Pyle’s columns, submitted before he lost his life in combat on April 17, 1945. At the time of his death, his column was running in over 700 newspapers nationwide.

The son of tenant farming parents in west-central Indiana, Ernie Pyle became history’s greatest war correspondent. When Pyle was killed by a Japanese machine gun bullet on the tiny Pacific island of Ie Shima in 1945, his columns were being delivered to more than 14 million homes according to his New York Times obituary.

During the war, Pyle wrote about the hardships and bravery of the common soldier, not grand strategy. His description of the G.I.’s life was more important to families on the home front than battlefront tactics of Gens. Dwight Eisenhower, Douglas MacArthur, or George Patton.

Prior to the United States’ entry into World War II, Pyle traveled to England and wrote about the Nazi’s continual bombing of London. His columns helped move the mood of America from isolationism to sympathy for the stubborn refusal of Great Britain to succumb to the will of Adolf Hitler.

The Pulitzer Prize winning journalist’s legacy rests in his words and the impact they had on Americans before and during a war that threatened to take the world behind a curtain of fascism. His columns open a window to the hardships endured by the common U.S. soldier during World War II and serve today to honor what has been called “The Greatest Generation.” 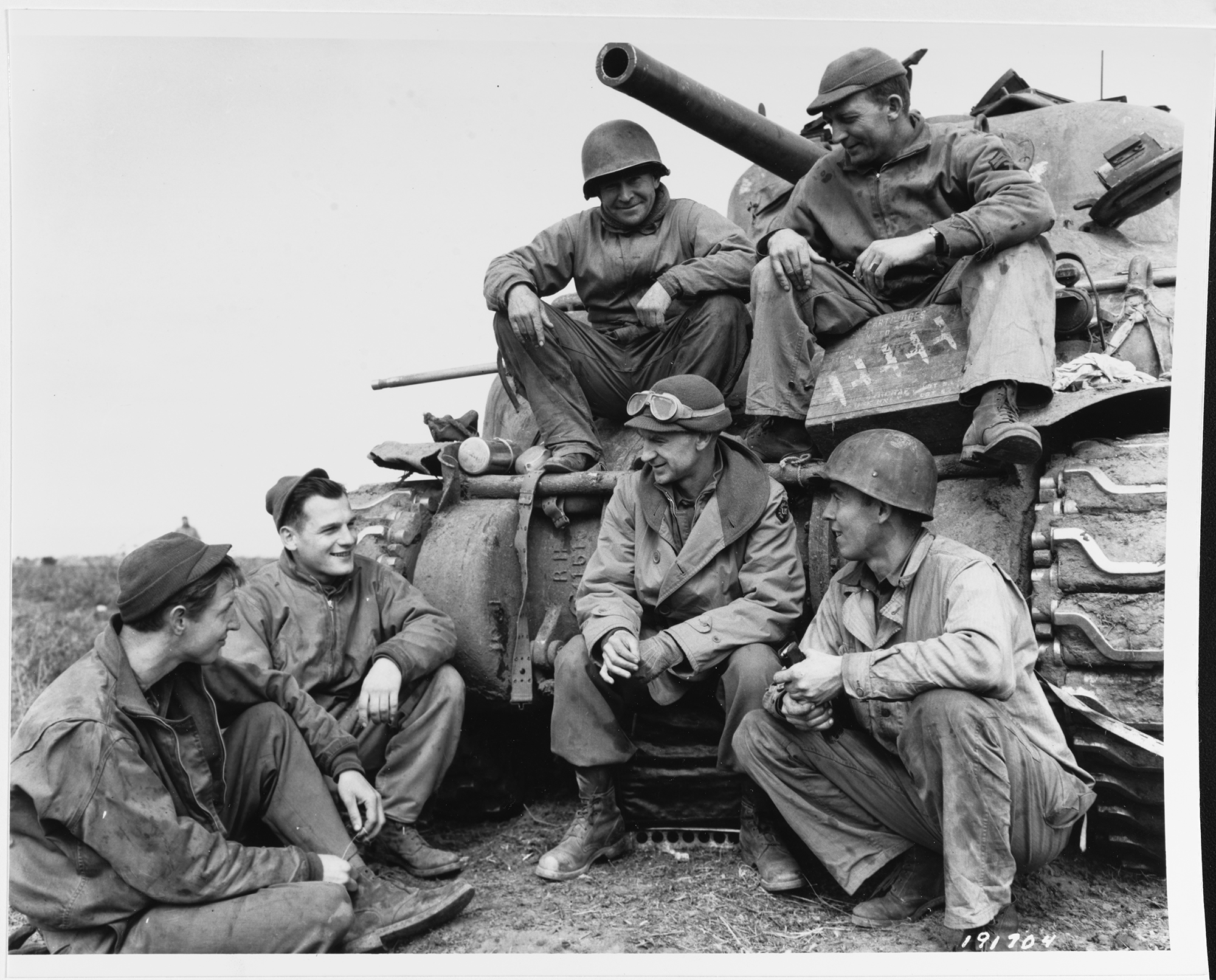 IN THE FRONT LINES BEFORE MATEUR–(by wireless)–We’re now with an infantry outfit that has battled ceaselessly for four days and nights.

This northern warfare has been in the mountains. You don’t ride much any more. It is walking and climbing and crawling country. The mountains aren’t big, but they are constant. They are largely treeless. They are easy to defend and bitter to take. But we are taking them.

The Germans lie on the back slope of every ridge, deeply dug into fox holes. In front of them the fields and pastures are hideous with thousands of hidden mines. The forward slopes are left open, untenanted, and if the Americans tried to scale those slopes they would be murdered wholesale in an inferno of machine-gun crossfire plus mortars and grenades.

Consequently we don’t do it that way. We have fallen back to the old warfare of first pulverizing the enemy with artillery, then sweeping around the ends of the hill with infantry and taking them from the sides and behind.

I’ve written before how the big guns crack and roar almost constantly throughout the day and night. They lay a screen ahead of our troops. By magnificent shooting they drop shells on the back slopes. By means of shells timed to burst in the air a few feet from the ground, they get the Germans even in the foxholes. Our troops have found that the Germans dig foxholes down and then under, trying to get cover from the shell bursts that shower death from above.

Our artillery has really been sensational. For once we have enough of something and at the right time. Officers tell me they actually have more guns than they know what to do with.

All the guns in any one sector can be centered to shoot at one spot. And when we lay the whole business on a German hill the whole slope seems to erupt. It becomes an unbelievable cauldron of fire and smoke and dirt. Veteran German soldiers say they have never been through anything like it.

Now to the infantry–the God-damned infantry, as they like to call themselves.

I love the infantry because they are the underdogs. They are the mud-rain-frost-and-wind boys. They have no comforts, and they even learn to live without the necessities. And in the end they are the guys that wars can’t be won without.

I wish you could see just one of the ineradicable pictures I have in my mind today. In this particular picture I am sitting among clumps of sword-grass on a steep and rocky hillside that we have just taken. We are looking out over a vast rolling country to the rear.

A narrow path comes like a ribbon over a hill miles away, down a long slope, across a creek, up a slope and over another hill.

All along the length of this ribbon there is now a thin line of men. For four days and nights they have fought hard, eaten little, washed none, and slept hardly at all. Their nights have been violent with attack, fright, butchery, and their days sleepless and miserable with the crash of artillery. 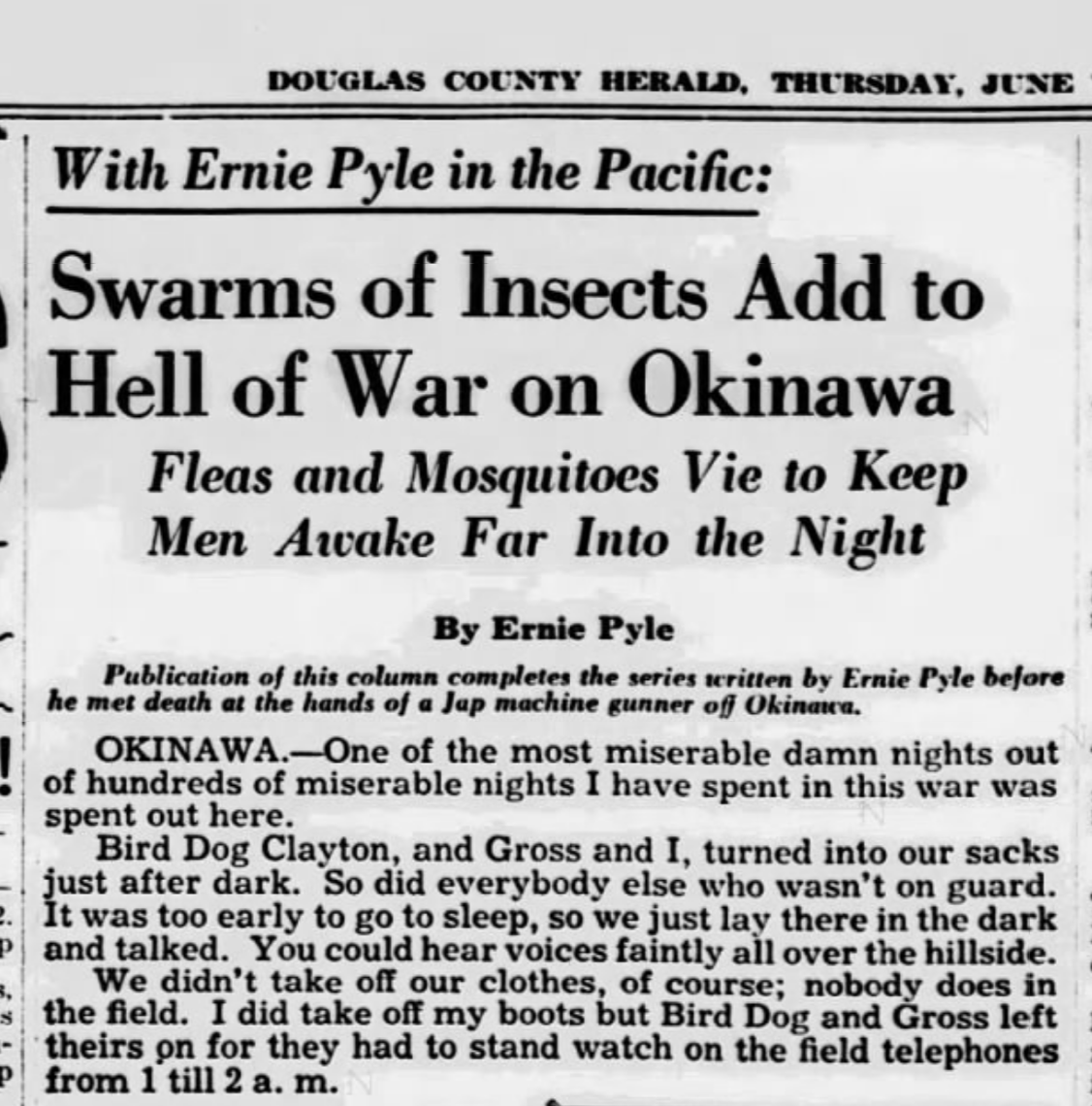 Submitted Photo
The Douglas County Herald carried the last few of Ernie Pyles columns after his death in early 1945.

The men are walking. They are fifty feet apart, for dispersal. Their walk is slow, for they are dead weary, as you can tell even when looking at them from behind. Every line and sag of their bodies speaks their inhuman exhaustion.

On their shoulders and backs they carry heavy steel tripods, machine-gun barrels, leaden boxes of ammunition. Their feet seem to sink into the ground from the overload they are bearing.

They don’t slouch. It is the terrible deliberation of each stop that spells out their appalling tiredness. Their faces are black and unshaven. They are young men, but the grime and whiskers and exhaustion make them look middle-aged.

In their eyes as they pass is not hatred, not excitement, not despair, not the tonic of their victory–there is just the simple expression of being here as though they had been here doing this forever, and nothing else.

The line moves on, but it never ends. All afternoon men keep coming round the hill and vanishing eventually over the horizon. It is one long tired line of antlike men.

There is an agony in your heart and you almost feel ashamed to look at them. They are just guys from Broadway and Main Street, but you wouldn’t remember them. They are too far away now. They are too tired. Their world can never be known to you, but if you could see them just once, just for an instant, you would know that no matter how hard people work back home they are not keeping pace with those infantrymen in Tunisia.

Permission to re-publish Ernie Pyle’s column was given by the Scripps Howard Foundation and distributed by the Ernie Pyle World War II Museum in Dana, Indiana.

To learn more about the Ernie Pyle World War II Museum located in Dana, Indiana, or make a donation to assist the efforts of the Friends of Ernie Pyle to honor him and that generation, go to erniepyle.org.