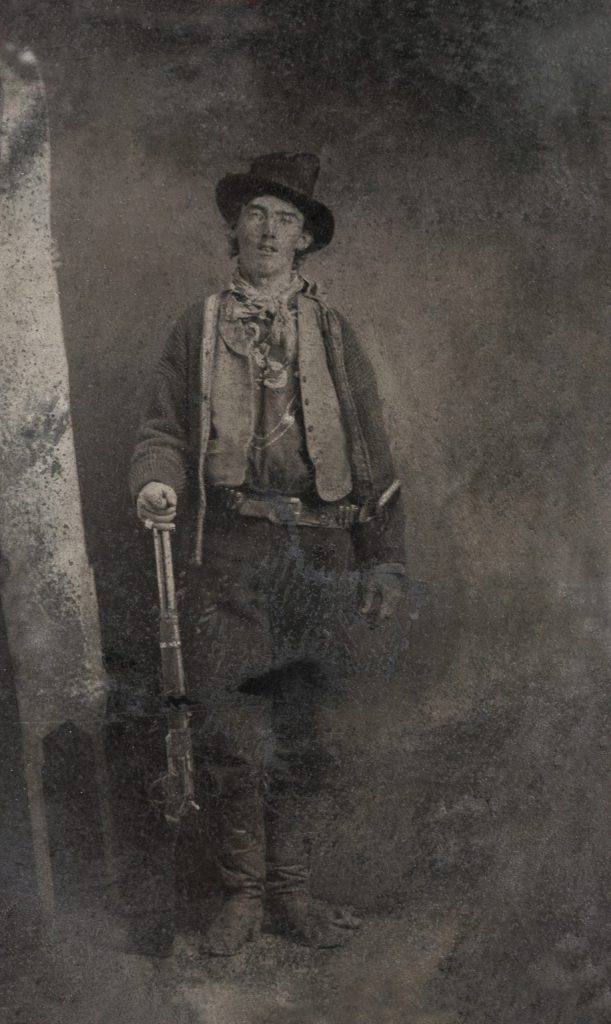 Above left, an 1880 public-domain photo of Henry McCarty, aka “Billy the Kid.” Above right, a 1939s Herald ad for Billy the Kid Returns at the Avalon Theater in Ava.

His name was Henry McCarty.

Aka Billy the Kid.

Much has been researched, written, and filmed about Mr. McCarty. He’s possibly the most famous and popular Wild West Outlaw.

Much is not known. And much is disputed.

But Missouri often comes up in his story.

Like his birthplace. Most researchers say it was New York. Yet he told census takers both his parents and he were born in Missouri.

Or maybe it was a Missouri woman who won his affections and ultimately led to his demise.

Two Missouri newspapers connect him with Nellie Pickett, born in LaFayette County, Missouri. Nellie was married to Tom Pickett and they both became part of Billy the Kid’s posse. After Tom was killed, Billy became enamored of Nellie and visited her at Fort Sumner. While there he was trapped and killed.

One story has them meeting in a Las Vegas Hotel and Jesse offering Billy a job robbing trains. Billy reportedly said it was “not his line of business.

What Billy the Kid related news did the Douglas County Herald publish for its readers?

Searching the Douglas County Herald archives, the only news items that come up are from after Henry McCarty’s death in 1881.

These stories are about impostors. Other outlaws trying to cash in on the fame and notoriety of the name.

Richfield, Kan., Sept. 19. – “Billy the Kid,” the Colorado Terror, yesterday appeared in Taloga, this county, for the purpose, according to information reached there in advance, of robbing the bank. The banker, however, put on the chronometer and quit business.

Billy waited several hours, but the bank did not open. He then went to Corde’s store, in which was W. N. Price, the clerk, alone, made a small purchase and when the clerk opened the drawer for change, dropped his gun on him and held him up till he emptied the till of about $10 and a gold watch. Billy then examined the premises for other booty. Fifty dollars was concealed about the room, but was not found.

The robber then mounted and left for Colorado followed by several Winchester Shots. The people of Taloga and vicinity will make short work of the next suspicious stranger from Colorado, but need help in the shape of arms.

Purcell, I.T. (Ed. Note: Short for Indian Territory, now Oklahoma), Sept. 11.- A fierce fight took place this morning about daylight at a house twenty-five miles down the river, between Deputy United States Marshalls Swain, Cook and Elkins and posse and two noted outlaws, in which the outlaws were both shot and captured, while the officer’s party were unhurt.

One of the men captured is known as “Billy the Kid” and William Conley. He is wanted on several charges of horse stealing and whisky peddling, and was a partner of John Herts, alias “Denver,” who is now serving a term in the Arkansas penitentiary. The outlaws had five head of stolen horses in their possession when captured.

Fifty years of the Herald come and go before Billy the Kid is mentioned again.

Then it’s all Hollywood making bank on the story:

In 1939, Ava’s Avalon theater was the first to advertise a related movie – Roy Rodgers starring in Billy the Kid Returns.

In 1941, the Avalon advertised Billy the Kid in Santa Fe starring Bob Steel.

In 1942, it was Billy the Kid’s Gun Justice starring Bob Steele. 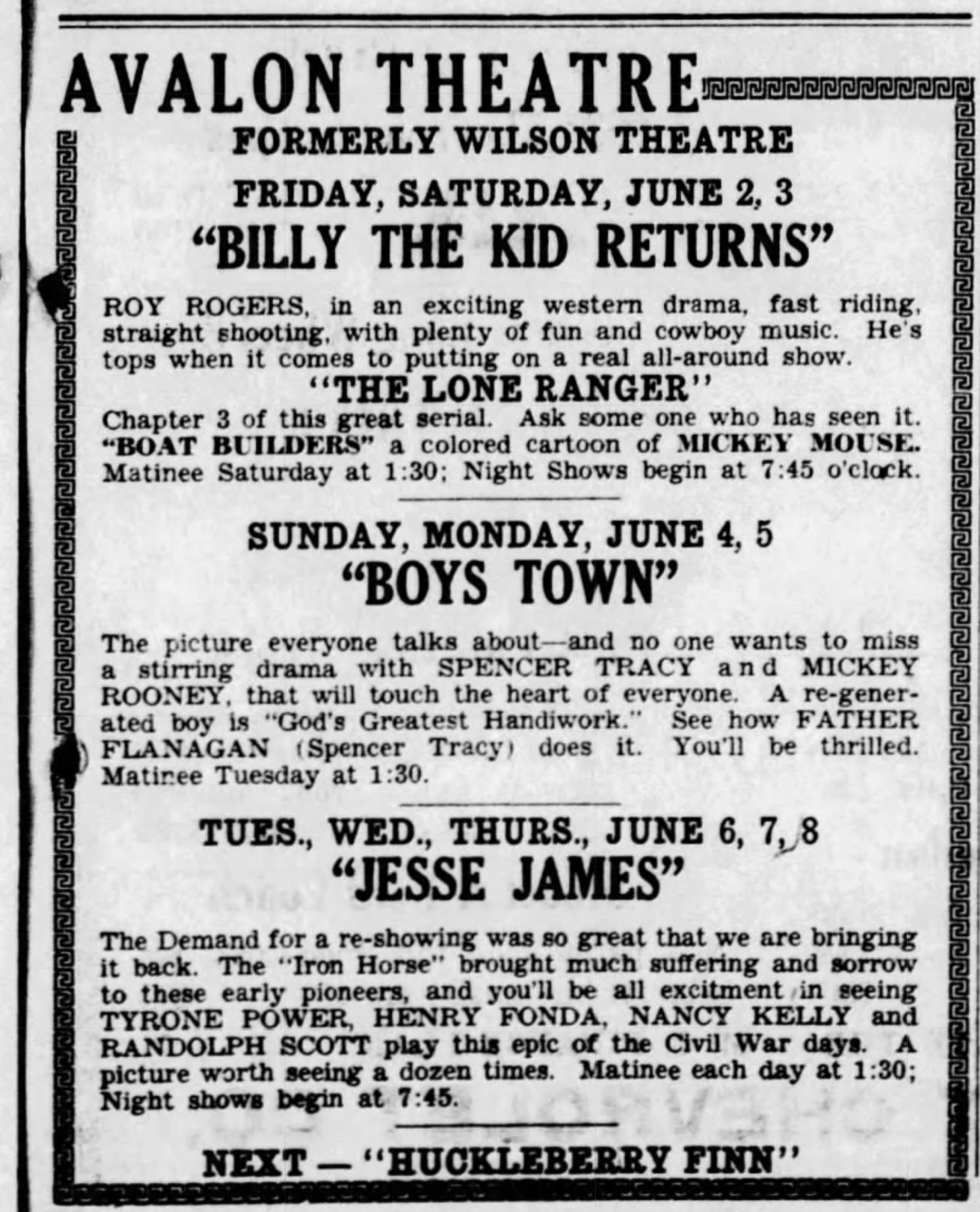 In 1947, The Pettit was showing The Outlaw, described as “An entertaining outdoor story about Billy the Kid. Howard Hughes production introducing Jane Russell, the girl about whom so much has been said.” 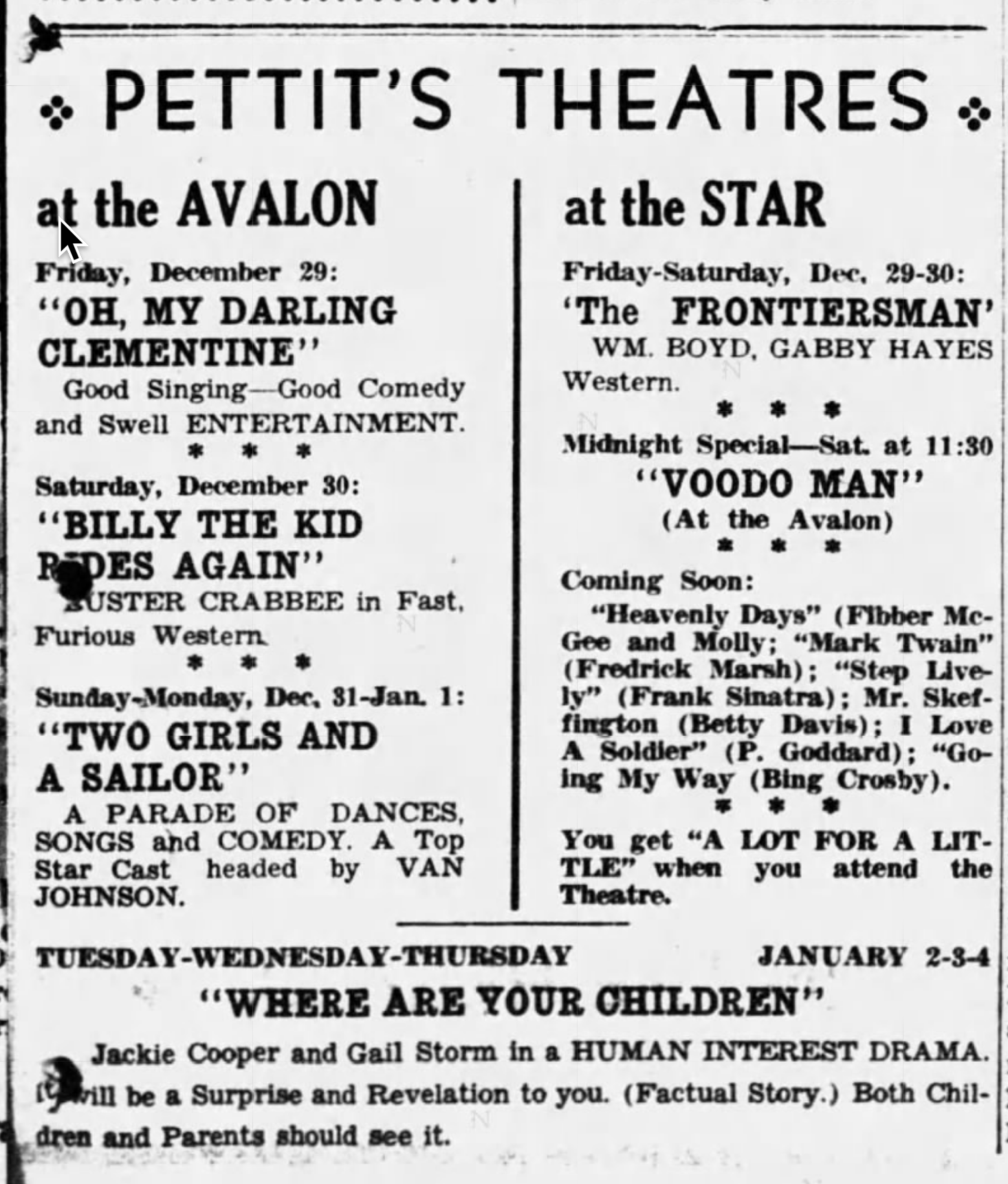 In 1950, the Roy Theater advertised Johnnie Mac Brown in Son of Billy the Kid.

In 1951, The Pettit Theaters were showing I Shot Billy the Kid starring Don Barry.

In 1952, the Alvin Air Way Theater (between Bruner and Sparta on Highway 14) was advertising Kid from Texas in Technicolor starring Audie Murphy as Billy the Kid. The Ava Drive-in (owned by Pettit Theaters) was showing Panhandle, described as the “Story of the Man Who Made Billy the Kid Back Down.”

In 1954, The Star Theater was showing The Law vs. Billy the Kid starring Scott Brady. The film is described as “A true story of the fastest gun the West ever knew! In Technicolor!”

In 1956, The Owen Drive-in Theater in Seymour also advertised The Law vs. Billy the Kid. It’s the last Billy the Kid-themed film advertised in the Douglas County Herald. 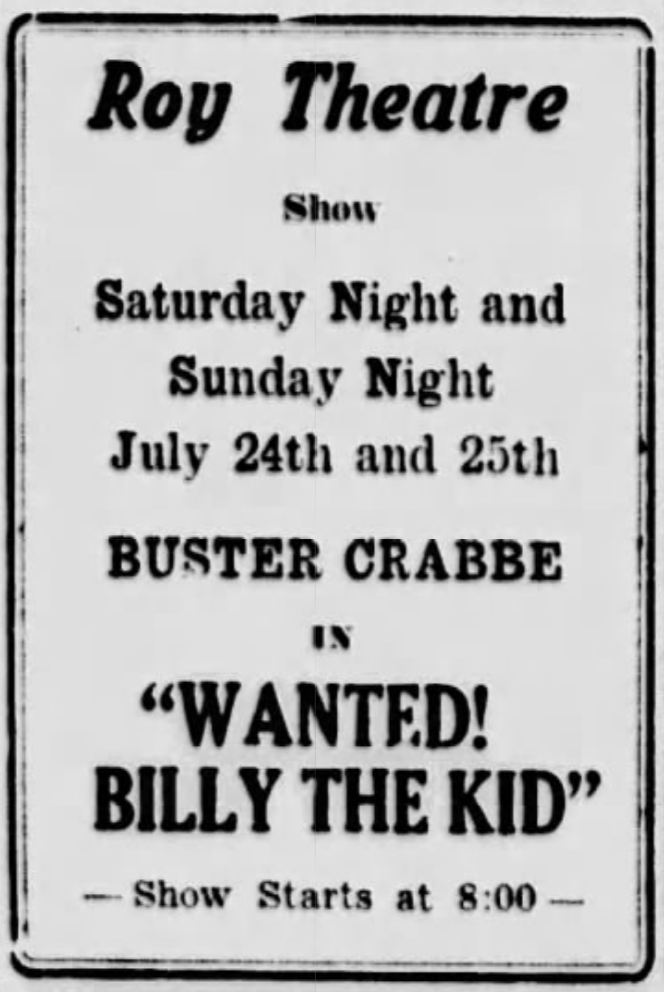 Maybe it was viewing some of these movies that fueled the most interesting Billy the Kid related story from the Herald’s pages.

He’d been watching local officers for over a year.

They weren’t doing what they should have been doing.

It had been 10 years since the National Prohibition Act had been passed by Congress.

But the Ozark County Police?

They kept allowing the sale of liquor.

Essex decided it was time for a crusade. One man making a stand.

But taking the same name would be too obvious. Essex settled on “The Missouri Kid.”

And he might indeed have been a kid. The newspaper account doesn’t specify his age, but refers to him as “young, a “local boy” and a “youth” who still lived with his parents.

On a Monday, Essex bought a .22 revolver and mounted up on his “trusty horse.”

He setup a roadblock on Highway 80 near Caufield. Put a bandanna over his face and hid in the bushes.

The first truck to come along just drove around the log.

Later, the driver related that he’d heard shots but they didn’t stop him.

Next up were two men from West Plains. They stopped and attempted to move the log.

“The Missouri Kid” Essex, masked and on horseback, rode out from the bushes.

He showed his gun.

And ordered the men to leave.

And drove straight to the next phone, where they called the Missouri State Highway Patrol. The men told officers that Essex had fired at them as they drove away but their car hadn’t been hit.

Troopers were immediately dispatched to the scene. The found an empty liquor bottle holding down a note.

Or else the law would be enforced by the “code of the hills.”

Tuesday morning, officers learned a Elijah, MO youth hadn’t come home Monday night. They met a local widow who told them Essex had forced her to prepare his breakfast that morning.

Officers and the boy’s father shortly located “The Missouri Kid” hiding in a vacant house. Essex Sr. “persuaded the boy to surrender to the officers without resistance.”

As the news account was being written no charge had been filed against Essex. The local Prosecuting Attorney was considering charges of “displaying a deadly weapon in a dangerous manner, and burglary and larceny.”

Larceny, because Essex Jr. had stolen some canned fruit from that vacant house.

It’s not clear if Essex ever paid for his crimes.

No mention “The Missouri Kid” is found in subsequent issues of the Douglas County Herald.

What ever became of Bill Essex, Jr. is a mystery.

Maybe he wasn’t so unlike Billy the Kid after all.