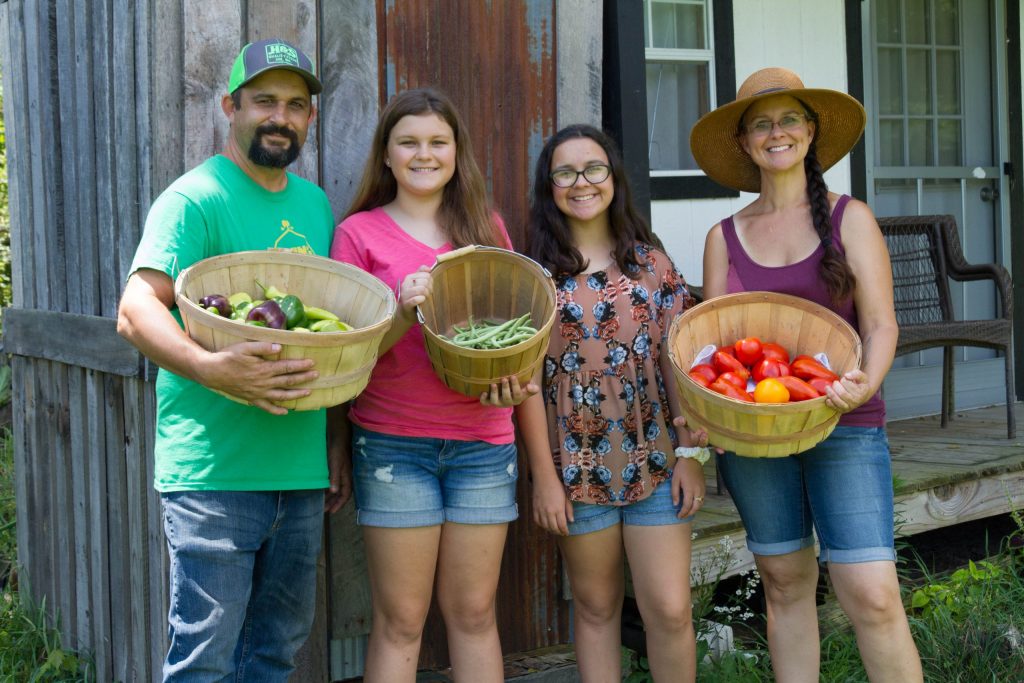 Savanna Kaiser/Rural Missouri Kevin, Grace, Samantha and Sarah Matthews relocated from Arizona to the Ozarks in 2016 to live their homesteading dream. Now, they share it with thousands on the “Living Traditions Homestead” YouTube channel.

The fog is still clinging to the pines as the morning sun and Missouri’s infamous humidity begin to rise. Bees are buzzing around the zinnias. There are goats to be milked, tomatoes to can and seeds to save. At first glance, it’s just another day on the farm.

Kevin and Sarah Mathews rise early to greet their homestead tucked along a rolling hillside near Ava. Living off the land is their dream come true, but through their blossoming YouTube channel, they’re now able to share their rural Missouri ways with the world. These self-employed homesteaders followed their hearts and returned to their roots, moving from Arizona to the Ozarks in 2016.

“For a long time, we both worked high-pressure, corporate jobs,” Kevin says. “Sarah worked in human resources for a big company and I worked in sales and traveled a lot. We grew tired of missing so much.”

Moving to the Midwest was intentional. “We longed to live a more traditional lifestyle like our grandparents and our great-grandparents lived,” Sarah says. “We’re only one or two generations removed from those who relied solely on the land and themselves to produce their own food.”

The couple settled on 16 acres near Ava, along with their two daughters, Grace and Samantha. Soon, their family grew to include goats, rabbits, ducks, chickens, turkeys, pigs and quail. They went to work building gardens, orchards and a greenhouse. “We also utilize the woods since Kevin likes to hunt and I like to forage,” Sarah says.

“We’re really tired of buying things from the grocery store, especially things I know we can grow or raise and produce ourselves,” she adds. They’ve been completely self-sufficient on meat for about seven years and grow around 80 percent of their vegetables.

“We only grocery shop once every six weeks or so and we only really need the staples like sugar and flour,” Kevin says. “We buy ingredients, not food.”

Their dedication to providing for their family with an old-fashioned focus led them to create their YouTube channel called “Living Traditions Homestead.”

“We didn’t originally plan on sharing our lives on YouTube when we moved here,” Kevin says. “We first started a blog and began posting videos there as a way of documenting our progress around the farm for our own family. Soon, other people started showing up to watch and learn alongside of us.”

For two years, Kevin and Sarah posted five videos a week. The videos, which total more than 500 at this point, showcase different seasons and projects in their lives.

“We’re very fortunate to be able to do this full time,” says Kevin. “For homesteaders, it’s probably never been as possible before now. An average 20-minute video will take us eight hours, between recording, editing, et cetera.”

Last year, they went down to three videos a week, which now allows them to do longer in-depth segments. Their channel surpassed 350,000 subscribers and continues to grow more each month. Their biggest following outside the U.S. comes from Australia and Canada.

“It’s an interesting time that we’re in,” says Kevin. “We get questions from people in Africa or Sweden on how to do certain things. When else in history could someone in rural Missouri teach someone in Africa how to raise rabbits?”

The couple credits their channel for inspiring them to keep learning and looking for future projects. They love taking on new challenges.

“We did a series on meat chickens, comparing two different breeds, week by week. We got a lot of great feedback from that,” says Kevin. They’ve also done a series on raising meat rabbits, including different ways to raise, butcher and cook them. “People from all over the world have been using those videos to raise rabbits,” Sarah says. They’ve even written a book on it, called “Our Family’s 25 Favorite Rabbit Recipes,” which they sell on Etsy and Amazon.

They love creating how-to videos. They try to outline the following week’s recording schedule, but it depends primarily on what needs done around their farm at the time. Most Saturdays, you’ll find them at the farmers market in Ava, selling plants and produce. This provides a great chance for followers to meet them in person. 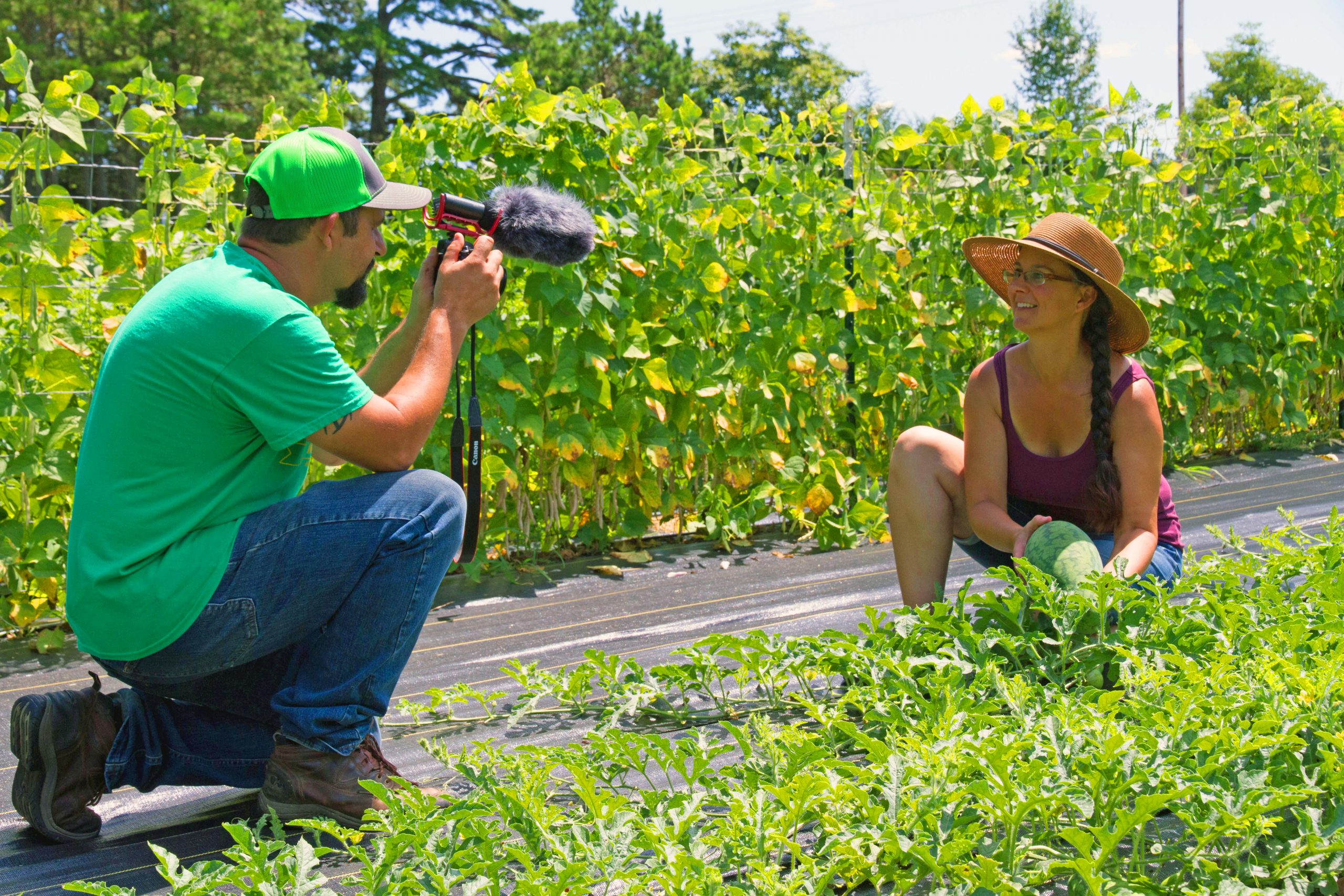 Savanna Kaiser/Rural Missouri
Kevin records Sarah in the garden for a new video.

Kevin and Sarah also grow seed for Baker Creek Seed Co. in Mansfield and do occasional speaking engagements. However, YouTube has now become a full-time job. It’s not uncommon to find them with a garden tool in one hand and a camera in the other. Their self-sufficient lifestyle incorporates the old with the new.

Summertime affords ample opportunities for videos, especially in the garden. Rows of peppers, beans and okra just scratch the surface of what the family grows. They work year-round establishing healthy garden beds and trellis systems. “I always say my knees are about 40 years older than the rest of me,” Kevin says with a chuckle, pointing to a row of pole pinto beans. “The more I can pick things standing up, the better.”

Last year, they grew more than 900 pounds of tomatoes. “If I’m not canning something every day, I’m going to be behind,” Sarah says. It’s not uncommon for them to record a video at their kitchen table, demonstrating various methods of preserving and cooking fresh produce.

“The nice thing about Missouri is that the seasons only last so long. We grew up in Wisconsin, where the winter lasts forever and in Arizona, the summer lasts forever, so this is just perfect. The best of everything, minus the ticks,” Sarah laughs.

While the YouTube channel has been successful for the family, their reasons for doing the educational videos haven’t changed, Kevin says. “We’re in this to be self-sufficient.”

Their family is grateful to reconnect with the past and with a community of others who share the same passion.

“We thank God for putting us in this era with technology because otherwise we wouldn’t be doing what we’re doing today. It’s a weird blend of living the traditional life and making a living online,” Kevin says with a smile. “It’s the best decision we ever made.”