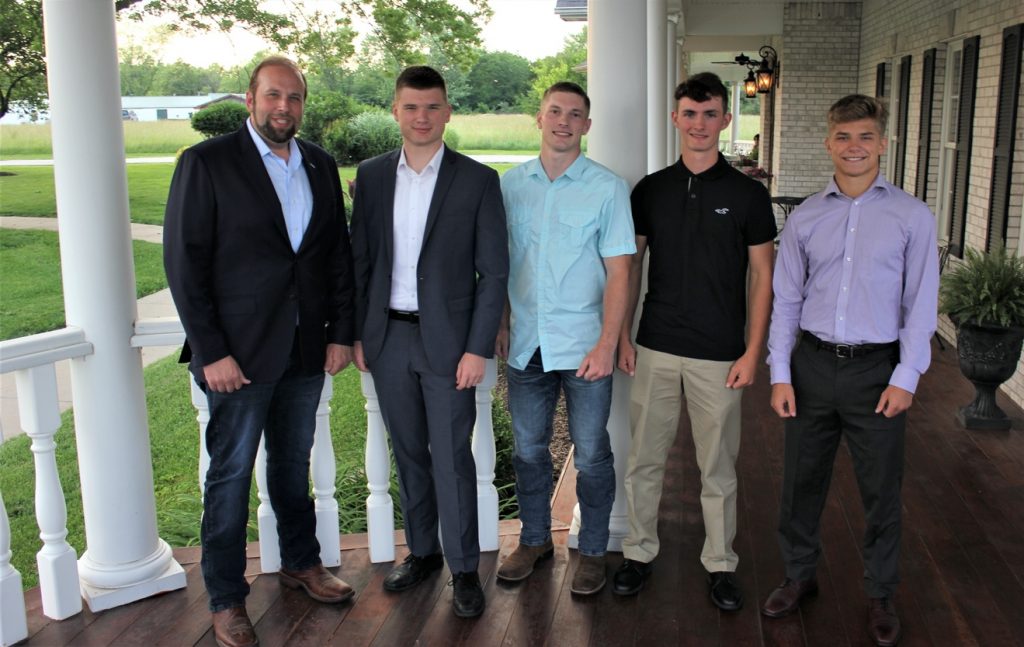 Photo submitted Congressman Jason Smith congratulates the students he nominated who have received appointments to U.S. service academies. Standing with the Congressman, from left to right: Nate Bramwell of Pomona, Stephen Copeland of Ava, Bo Parker of Mountain Grove, and Dathan Mickem of Rolla.

AVA, Mo. – Congressman Jason Smith’s (R-MO) congratulated Stephen Copeland of Ava on his appointment to the U.S. Naval Academy this fall. Copeland is one of only four students to receive appointments to one of the U.S. Service Academies this year out of all the nominations made by Congressman Smith.

Smith praised Stephen’s leadership skills, academic and athletic accomplishments, and his desire to make a difference in the world. Smith expressed his confidence in Copeland and encouraged him to continue to set high goals for himself.

“One of the greatest privileges of my job is nominating outstanding students from the 8th district to attend one of our U.S. service academies,” Congressman Smith said. “It’s an intense process and Stephen has done a phenomenal job in meeting the requirements for admission. I am honored to have played a part in helping him achieve his dreams and I look forward to keeping up with him as he begins his military career.”

Stephen Copeland is a graduate of Ava High School and completed the Naval Academy Preparatory School. He is interested in Navy aviation, or joining the Marine Corps or Navy Seals. His hero is President Ronald Reagan.

He will be joined at the U.S. Naval Academy by Nate Bramwell from Pomona. The other two appointees from southern Missouri are Bo Parker from Mountain Grove and Dathan Mickem from Rolla. Both will be attending the U.S. Military Academy at West Point.

The Congressman is currently accepting applications for 2021 nominations to the U.S. Military Academy at West Point, the U.S. Naval Academy, the U.S. Air Force Academy and the U. S. Merchant Marine Academy. To receive a nomination packet via email, high school seniors or graduates who will be under 23 years of age by July 1 of 2021 may contact the Congressman’s Farmington office at 573-756-9755 or email donna.hickman@mail.house.gov.