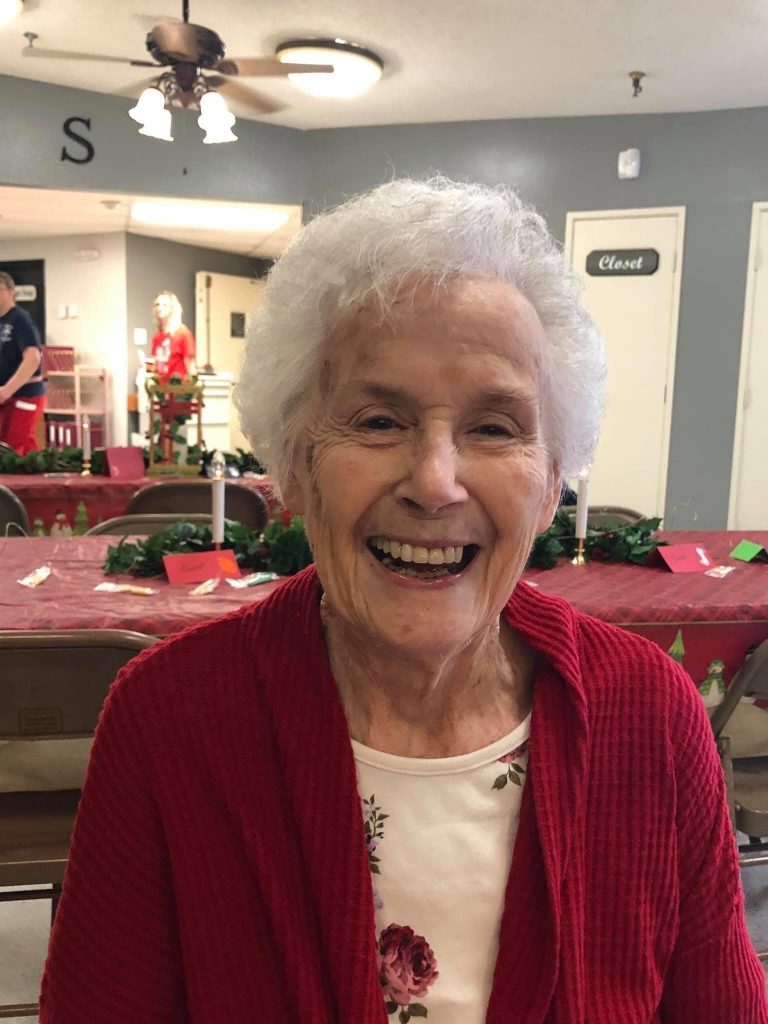 Inez grew up in the Douglas County area, along Fox Creek. She graduated from Mountain Grove High School and married her sweetheart, Noble Gene Barker Sr., on August 29, 1942. They celebrated their 75th anniversary shortly before Noble’s death in 2017. They were married by Rev. George Walter at his home in Owensville, near Hartville, Missouri. Rev. Walter’s daughter, Lacy, was one of the witnesses. Lacy later married Inez’s brother, Roy Harrison. Noble and Inez had three children: Rita Sue (Barker) Longmar, Noble Gene Barker Jr., and Thomas Charles Barker.  Besides their three children, Noble and Inez had seven grandchildren and nine great grandsons.

Inez worked in the home taking care of her family and providing for their needs. She enjoyed working with Noble and their family on their farm in Ozark County.  Milking was a favorite chore.  She was a compassionate person, often taking care of ailing family and friends, and would help care for the terminally ill, providing comfort and praying with them.  Inez accepted Christ as her Savior as a young girl.  Her faith led her to teach children’s Sunday School.  Later in life she had the idea of starting a “Happy Birthday Jesus Party” in the mission village in the Philippines where her son Tom and his wife Leila were serving in the U.S. Peace Corps. With the help of a missionary, Esther Rice, they began with about 30 children who shared a meal, received small gifts, and heard the true meaning of Christmas and Christ’s birth.  Inez remained personally involved from a distance for many years. The program is still ongoing and her family remains involved to carry on in her honor what Inez started.  It now reaches over 900 children each year in several provinces of the Philippines.  What a beautiful legacy!

Other activities Inez enjoyed include flower and vegetable gardening, handcrafts such as sewing, knitting, needlepoint, crochet, and quilting, as well as cooking and canning. With her family, she liked to travel and camp.  She was able to visit all 48 contiguous U.S. states as well as Mexico. Inez also loved music, especially singing gospel songs with her family.  She faithfully served the Lord through church, being a member of the Vanzant Baptist Church for over 30 years.

Inez’s sincere final wish was that her family would all accept Jesus as Savior and follow Him throughout their lives.  She hoped to see them all in Heaven.

Visitation for Inez Barker was held Monday, June 29, 2020, from 5:00-7:00 p.m. at Craig-Hurtt Funeral Home.  Funeral services were held Tuesday, June 30, 2020, at 10:00 a.m., also at the funeral home, with Pastor Zach Hamby officiating.  Burial was in Hillcrest Cemetery under the direction of Craig-Hurtt Funeral Home, Mountain Grove.  Memorial contributions may be made to Dora Family Life Church Philippine Missions in care of the funeral home.