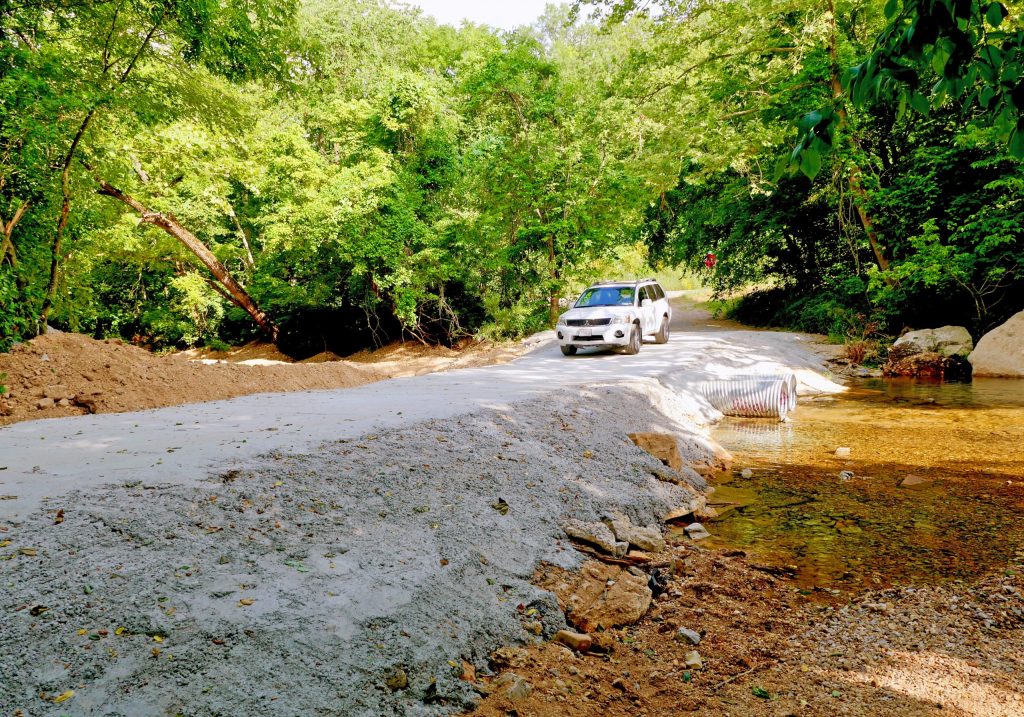 County Road 14-313 got a refreshed cement water crossing this past week. Heavy rains earlier in the year washed out the previous paved crossing.

Money for roads. Where all does it come from?

Last week we looked at one source – the road maintenance-specific sales tax Douglas County Voters approved in late 2018 and the County began collecting in April of 2019.

(Editor’s note: Last week we published the total sales tax dollars collected since the tax began. The above number is the amount collected just during FY 2019).

Adding these nine sources up, and  factoring in other accounting issues, and Davis says the  total 2019 revenues for Douglas County roads was $1,550,319.68.

Douglas County claims around 800 miles of gravel roads to maintain, and normally has 16 employees to do the work.

“Look at the Ava roundabout,” Stillings said. “MoDOT’s been wanting to do something with that for going on four years now.”

Out in the county, additional agencies need to be involved on roadwork that involves water crossings.

“When we worked on Fox Creek,” Stillings said, “the DNR and Fish and Wildlife had to get involved. They did an impact study on the Hellbender Salamanders that added eight months to the schedule.”

Working with FEMA can also be difficult. “FEMA will require us to restore section of road to the state it was in originally,” Stillings said. “Then if or when it washes out again we can modify what we’re doing there. It’s frustrating on projects like Bryant Creek to do work to FEMA specs, jump through all the hoops to get the money back, then the next flood it’s all gone.”

Stillings says the county is also now working with the South Central Ozark Council of Governments (SCOCOG) to get a grant, but it’s not free money. “SCOCOG grants have a matching requirement of 25%,” said Stillings. “A lot of grants require a match. Or we have to front the money, do the work, then apply for reimbursement when the work is done.”

Prioritizing road issues is largely done on the fly. “It depends on where my guys and equipment are at,” said District 1 Commissioner. “We try to hit everything a couple times a year, and more often where there’s more traffic.”

Long-range plans for road maintenance can often be foiled by mother nature.

“We’ve had four FEMA disasters in the last five years,” said Stillings. “We had all that rain this spring, everything got washed out and muddy, and now it’s all dry again.”