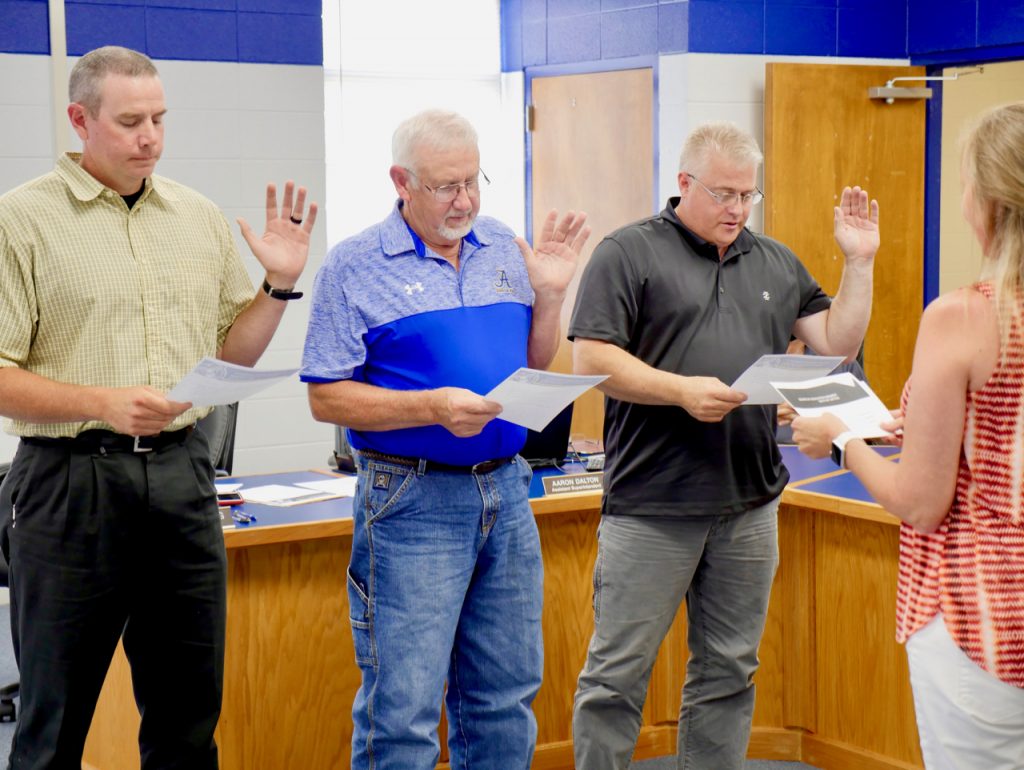 (Left to Right) Mark Henry, Lowell Strong, and Troy Tredway are sworn into service on the Ava R-1 School Board at the reorganization meeting Tuesday night by Superintendent’s Secretary BJ Sterling.

The Ava R-1 School Board held its post-election reorganizational meeting on Tuesday, June 16th at 6:15 p.m.

This meeting contained more discussion than most Ava School Board meetings, which made it nearly two hours long. What follows is a summary of the actions the board took, with references to discussion points we felt significant. To review the meeting in its entirety please visit the Douglas County Heralds YouTube channel.

Swearing in of Candidates

Once seated, the board elected the following new officers:

The board voted 6-0 to certify the recent school board election results (with vote totals as posted in previous editions of the Herald).

During the discussion of the Consent Agenda (which includes paying the school’s bills), Board Member Dan Johnson shared a story of purchases being made at a local lumberyard being charged to the school by workers the lumberyard didn’t recognize.

Dr. Dial said that only school employees should be able to sign for a purchase. All purchases are then approved by Maintenance Director Monty Valentine. Dial said he would check on that situation.

Board Member Deana Parsick brought up the board’s recent approval of a contract with KPM for auditing. She said the board hadn’t followed proper MSBA policy by not choosing the lowest bidder. Parsick had reviewed both bids and found no difference in the terms of the bid, but the local supplier was nearly $5,000 cheaper per year.

Dial said he would investigate the terms of the KPM contract to see if it could be canceled.

Dr. Dial reported on the school’s current financial picture. He said that as a result of the coronavirus pandemic, the school will lose revenues of $561,799 from the state. However, COVID-19 funds will make up for $429,009 of that, resulting in a net loss of $132,790.

Dial reported a rough estimate of $1 million to build a proposed additional storm shelter for elementary and preschool students.

With other projects the school was still paying on, Dial estimated it would take 6-8 years to save up funds for a shelter.

Board member Dan Johnson expressed a desire for the school to create a 5-10 year plan to map out these types of projects. The board took no further action.

The Board agreed to a meeting on June 25th to approve its yearly budget and contracts. Time of the meeting is yet to be announced.

Assistant Superintendent Aaron Dalton reported that the school was busy preparing for a wide range of scenarios for reopening on August 24th, and keeping students safe in light of COVID-19 considerations.

Board member Bart Ellison moved to extend the contract for bus route #1 to Lance Stillings for an additional year. The motion failed in a 2-4 vote, with Ellison and Henry the only board members in favor.

In a 4-2 vote the board voted to list Bus Route #1 for sale at a price of $32,425 – the amount it earned during the last fiscal year. Ellison and Henry cast the dissenting votes.

There was significant discussion leading up to the vote. Board member Mark Henry was in favor of the school retaining ownership of the route, saying “It wouldn’t be wise to sell it.” Troy Tredway disagreed, saying “Why would we keep it? The system is working well for other routes.”

The route will be advertised for two weeks, starting in this edition of the Herald.

Editors Note: Busing discussions begin at the 1:13:00 mark in the video.

In a 5-1 vote, and after some discussion, the board approved a motion by Troy Tredway for the school board to drop any and all legal action against individual route owners, route drivers, and the Route Owner’s Association. Bart Ellison cast the single dissenting vote.

In a 5-1 vote, the board approved a motion by Dan Johnson to authorize the Ava School Board President and Vice President to meet with representatives of the Bus Route Owners and work out a solution for installing bus cameras. Bart Ellison cast the single dissenting vote.

In a 5-1 vote, the board approved a motion made by Dan Johnson to authorize the board President and Vice President to gather all the communication between the school board and Transpar during the recent creation of the bus study. Bart Ellison cast the single dissenting vote.

In a 6-0 vote, the board approved a tax rate hearing to set the tax levy to occur at regular board meeting on August 20th.

Board member Brandi Stanifer was absent.

During the closed portion of the meeting the board accepted the resignations of:

The board approved recommendations of

A video recording of the entire meeting can be found on the Douglas County Herald’s YouTube channel.

The next regularly-scheduled meeting of the Ava R-1 School Board is on July 16th at 6:30 p.m. in the Board of Education Room.