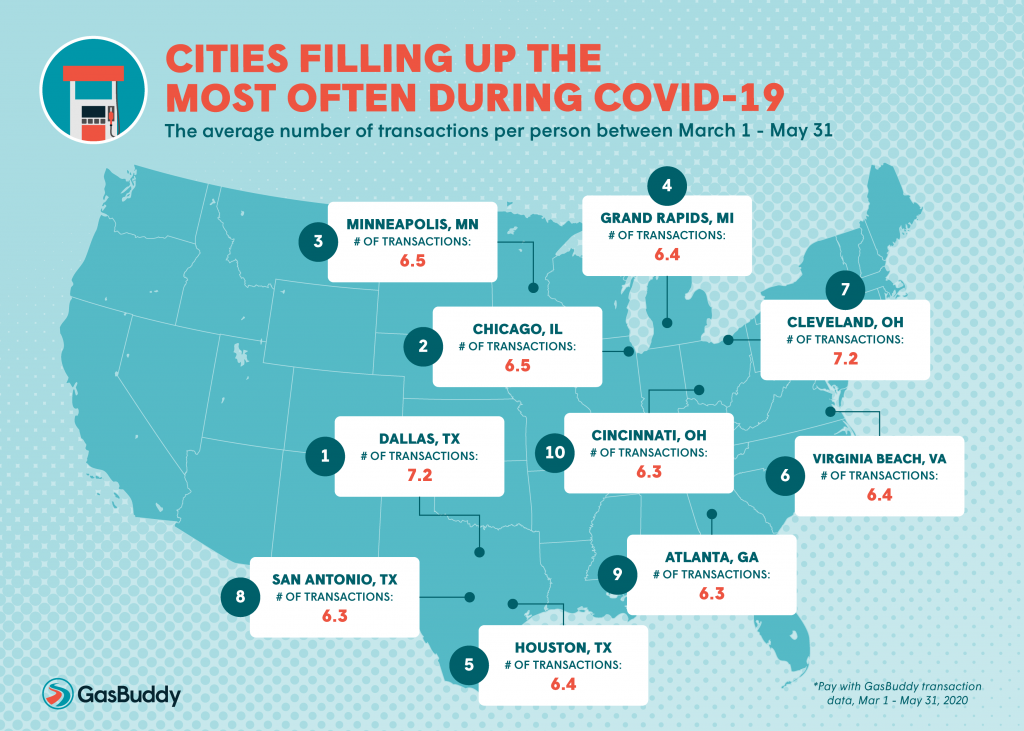 BOSTON — On average a person in Dallas visited the pump nearly twice as often as one living in Las Vegas between March 1 to May 31, 2020. In the same time span, a person in Birmingham, Ala. bought 31 percent more gasoline than someone in Los Angeles.

A lot can be learned about a city by looking at what’s happening at their gas stations. GasBuddy, the travel and navigation app that is used by more North American drivers to save money on gas, today shares how the top 50 most populous U.S. cities rank in fueling activities during a pandemic at the height of stay-at-home orders.

Demand for fuel has been at record-lows across the nation since the COVID-19 outbreak. According to Pay with GasBuddy data between March 1 to May 31, American consumers made on average 2.8 fuel transactions per month, a drop from the usual 4.5 times per month prior to the outbreak.

Cities that saw more frequent visits to the gas pump were clustered in the Great Lakes region, five out of the top 10, and Texas, three out of the top 10. While cities with the fewest fuel transactions were centered in California and the East Coast.

Various factors play a role as to why there were more fueling activities in certain cities than others.

The Great Lakes region saw some of the lowest gas prices in more than a decade. Each day brought a new “record-low” price enticing residents to make frequent visits to their local station to take advantage. This is further evident when looking at Chicago. Chicago saw the most transactions after Dallas, however, it didn’t make it to the top 10 as a city that purchased the most volume of gasoline. This signals that people were making frequent trips to the pump but purchasing small amounts.

A city like Las Vegas has been ground zero for the American job crisis. With much of its economy dependent on the leisure and hospitality industry, it leaves very little activity in the city when there is no tourism. The same can be said about Detroit, also on the list of fewest fuel transactions, with the closing of its casinos in March.

Texas had one of the shortest stay-at-home orders, while California had one the longest and strictest, which are reflected strongly in GasBuddy’s fuel transaction data. This played a role in whether people had places to go from commuting to work or visiting friends.

GasBuddy is the travel and navigation app that is used by more North American drivers to save money on gas than any other. GasBuddy covers 150,000+ gas stations in North America, giving drivers 27 ways to save on fuel.