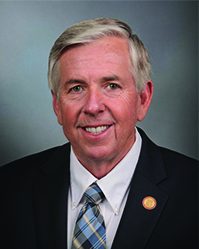 Mark Arnold, of St. Charles, was appointed to the Residential Mortgage Board.

Joe Bayer, Jr., of Ballwin, was appointed to the Residential Mortgage Board.

Mr. Bayer is the Executive Vice President of First Integrity Mortgage Services, Inc. Previously, he served as the Area Rental Manger for Enterprise Rent-A-Car in St. Louis. Mr. Bayer has served as President of the Mortgage Bankers Association of St. Louis and currently serves on the Mortgage Bankers Association Board of Directors. He volunteers his time as a youth basketball, baseball, and soccer coach. He has also organized events for the Make-A-Wish Foundation and the Alzheimer’s Association’s Memory Walk. Mr. Bayer holds a Bachelor of Arts in communications from Truman State University.

Helene Frischer, of Chesterfield, was appointed to the Missouri Ethics Commission.

Ms. Frischer has practiced law in the St. Louis area since 1994 and currently manages her own law firm. She is a member of the National Organization of Social Security Claimant Representatives and the Bar Association of Metropolitan St. Louis, previously serving as chair of the Association’s Administrative Law Committee. She is active within her community serving on the Women’s Philanthropy Board with the Jewish Federation of St. Louis and leading the Project Graduation fundraiser for Parkway High School. Ms. Frischer holds a Bachelor of Arts and Science and a Juris Doctorate from Drake University in Des Moines, Iowa.

Michelle Luster, of St. Louis, was appointed to the Board of Cosmetology and Barber Examiners.

Ms. Luster is a licensed educator and cosmetologist with over 20 years of experience in the industry. She served as owner and operator of Alternative Nail Salon & Spa for over 18 years and also taught as an instructor for several years. She also previously worked as an insurance agent for Travelers/Primerica Insurance Company and as a student teacher for Riverview School District. Ms. Luster holds an associate degree and teaching certification from Harris-Stowe State University and a Cosmetology Educator’s License from Elaine Steven Beauty College.

Hanh Nguyen, of Wentzville, was appointed to the Board of Cosmetology and Barber Examiners.

Mr. Nguyen currently serves as a financial advisor for Krilogy. Previously, he served as a mathematics faculty member at Warrenton High School, Sullivan High School, and Nevada High School. He has worked closely with the Organization of Chinese Americans, the Vietnamese Association of Greater St. Louis, and the Asian American Chambers of Commerce. Mr. Nguyen holds a Bachelor of Science in computer science from New Mexico Institute of Mining and Technology. He also holds a Master of Arts in secondary educational administration from Missouri Baptist University, and a Master of Business Administration from Lindenwood University.

Joseph S. Passanise, of Rogersville, was appointed to the Tourism Commission.

Mr. Passanise is a partner at Wampler and Passanise Law Office in Springfield where he practices criminal defense in federal, state, and municipal courts. He is a member of the Missouri Bar Association, the National Child Abuse Defense & Resource Center, and the Missouri Association of Criminal Defense Lawyers. Mr. Passanise has been selected as a Fellow by the American Board of Criminal Lawyers, an honor only five Missouri attorneys have received. He has also received the Lifetime Achievement Award from America’s Top 100 Attorneys and has been recognized as a “Best Lawyer” in America by his peers since 2007 in white collar, non-white collar, and DUI defense. Mr. Passanise holds a Bachelor of Science in political science and communication from Missouri State University, a Master of Business Administration from the University of London – Imperial College in London, England, and a Juris Doctorate from Washburn University School of Law.

Michael Prost, of Chesterfield, was appointed to the Missouri Health Facilities Review Committee.

Mr. Prost is a founding owner of Mueller Prost, a certified public accounting and business advisory firm, where he has served as Vice President since 1983. He holds several professional designations including Certified Public Accountant, Certified Valuation Analyst, Accredited Business Valuator, and Accredited Senior Appraiser. Mr. Prost is a member of the American Institute of Certified Public Accountants, the American Society of Appraisers, and the Missouri Health Care Association. He is also a member and former President of Bridgeway Behavioral Health. Mr. Prost holds a Bachelor of Science in Business Administration and Accounting from the University of Missouri-St. Louis.

Timothy Wahl, of Columbia, was appointed to the Workers’ Compensation Determinations Review Board.

Mr. Wahl is a Commercial Lines Marketing Manager with Gallaher Insurance Group where he has worked for the past 23 years. He has been a licensed insurance agent since 1991 and has earned the designation of Certified Insurance Counselor. Mr. Wahl serves as Chairman of the Missouri Independent Agents Coverage Advisory Committee writing articles to help agents nationwide understand complex policy coverage issues. He is also a faculty member of the Insurance Agents and Brokers of America, Inc. Virtual University. Mr. Wahl represents the Missouri Association of Insurance Agents each year at a national technical conference where he works with other policy experts to improve policy verbiage and coverages nationwide. Mr. Wahl holds an Associate of Arts in business teaching education from John A. Logan College. He also holds a Insurance Counselor certification designation from The National Alliance of Insurance and Education.