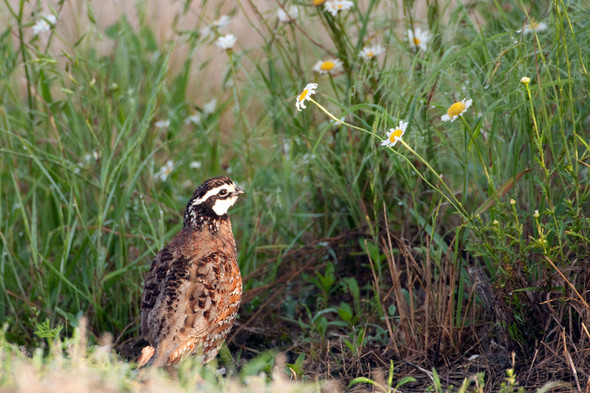 A Bobwhite Quail watches for a danger during the summer month at Hi Lonesome Prairie near Sedalia, MO.

KANSAS CITY, Mo. – For some children, mimicking the northern bobwhite quail’s mating call was how they learned to whistle. They heard the urgent and earnest “bob-white” sound lilting from pastures and fields. The call’s short and sharp notes are impressive, and rather easily imitated, so youngsters did. For older folks, hearing quail calling means summer is progressing on time, a reliable sign along with butterflies returning and meadowlarks chirping atop wooden fence posts. Today, however, many people are missing the bobwhite whistle in their neighborhood.

Bobwhite quail populations are holding steady on land with suitable wildlife habitat. But statewide, quail numbers have fallen drastically in recent decades. The drop is due to habitat losses caused by urban sprawl and clean farming practices, unusually rainy weather that harmed nesting success, mature trees replacing shrubs and grasses, and other factors biologists are examining. However, the Missouri Department of Conservation (MDC) has proven on conservation areas and private land, that if given good habitat, quail populations will remain and even thrive.

Almost 90 percent of the land acreage in Missouri is privately owned. Bobwhite quail will need help from property owners to hold their numbers steady or rebound. Quail numbers can be boosted, especially when adjoining landowners work together on habitat, even if just on the margins of fields.

This is a prime nesting and brooding rearing season for quail. A lack of good brood rearing habitat, plants easy for tiny, young birds to walk through and find food, may be the top limiting factor for quail numbers in the Midwest, said Kyle Hedges, an MDC wildlife management biologist who has studied quail. 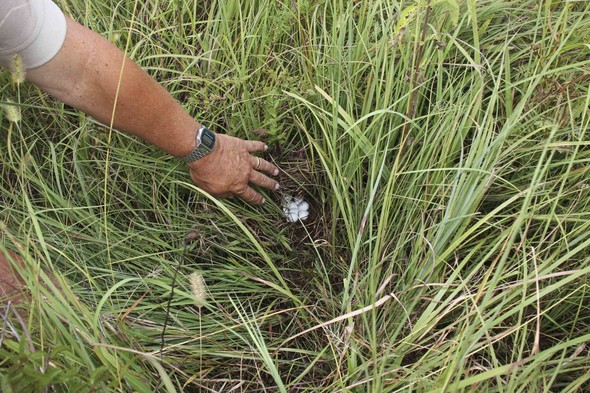 MDC Photo
Bobwhite quail pairs like to hide nests away in cover to protect eggs and young from predators and weather. This quail nest, photographed in August, is tucked into prairie grass and wildflowers. MDC researchers have found quail nesting from late May into early September.

A starting step in early summer is listening for quail giving the bobwhite call.

“If a landowner doesn’t hear any on their property, but quail are always whistling on the neighbor, evaluate what habitat the neighbor has that their land lacks,” Hedges said. “If there are none heard within a mile, then they need to realize this could be an uphill battle, but not impossible.  Radio collared birds in MO were documented moving up to 3 miles.  However, that was across reasonably hospitable habitat.”

Native plant areas with both native grasses and forbs (wildflowers) are very important for quail success. Those plants provide nest cover, but as important, they host native insects that both mature and newly hatched quail need for food in the summer months. The natives also tend to have spacing between stems at the ground level, which enables young chicks to move about more easily. MDC staff can connect land owners with state, federal, and private programs that help pay for establishing habitat in a field or along a field margin. Plants like little bluestem, common sunflower, partridge pea, or a host of others can be planted to help quail, or simply let weeds provide cover.

Some programs offer financial help for habitat work to help pollinator species such as butterflies and bees. But quail and other grassland birds can benefit, too, especially if a pollinator planting is combined with other wildlife habitat improvements. Places where soil quality or drainage is poor for growing crops may be more profitable and productive if placed in a habitat program.

The more acres of good habitat for grassland birds in an area, the better the chances that quail will thrive. Some adjoining landowners form quail habitat cooperatives. They discuss best practices, share equipment, and help each other with prescribed burns or tree removal projects that can help quail.

Speaking of trees, there’s no need to eliminate trees valued for shade, scenery, nut production, or wildlife habitat. However, if trees and tree lines are randomly growing without serving a purpose for the property owner, they could be harboring predators that harm quail. MDC studies have found quail survival rates are lower near mature trees. However, shrub thickets can help quail survival rates. Substituting shrubs for trees can help quail.

Determine if mowing in a hayfield or pasture can be delayed past the early nesting season. Postpone or eliminate unnecessary mowing. MDC researchers have found quail nesting from late May through early September. Quail hens sometimes tend two or three clutches of eggs in a summer.

Cattle grazing can help habitat for quail when grasses are not overgrazed. MDC staff can connect property owners with conservation ranching forages and practices that can help both ranchers and wildlife.

Bobwhite quail have a long legacy in Missouri as a favored gamebird. But they are also popular for their summer songs. And for people lucky enough to see them moving about, they have a wild-but-noble bearing. Quail can fly with a speedy burst, but mostly they are a jaunty ground feeding and nesting bird of the grasslands and the open woodlands. Their numbers may have increased from the Civil War to after World War II, thanks to early farm practices that increased usable habitat. With the right conservation practices used alongside agriculture, their numbers can rebound today, too.

To learn more about MDC assistance with wildlife habitat on private land, visit https://mdc.mo.gov/property. For more information about northern bobwhite quail and their habitat, visit https://short.mdc.mo.gov/Zh6.