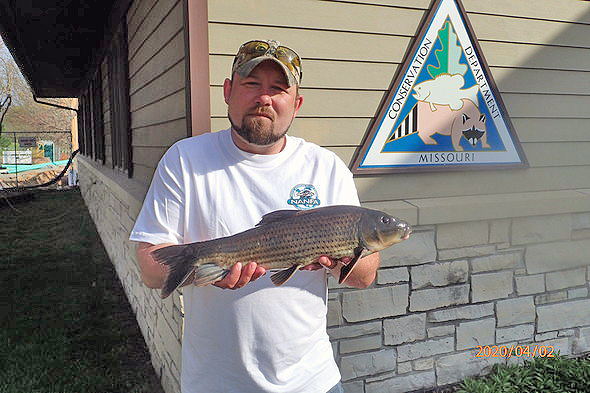 JEFFERSON CITY – The Missouri Department of Conservation (MDC) congratulates Tyler Goodale of Poplar Bluff for catching a new state-record spotted sucker. The 5-pound, 4-ounce fish not only breaks the previous state-record, a 3-pound, 10-ounce fish caught in 2014 also by Goodale, but also qualifies for the world record.

“Goodale’s latest catch beats the existing world record by nearly 2-pounds,” said MDC Fisheries Programs Specialist Andrew Branson. “The previous world record was a 3-pound, 5-ounce sucker caught back in 2008 in Tennessee. Missouri has had a number of world-record fish over the years. Currently the state holds at least five world records.”

Goodale was fishing at Duck Creek Conservation Area April 1 when he caught the fish using the pole-and-line method.

“I’ve fished for spotted sucker at Duck Creek before and have already broken a state and world record,” mentioned Goodale. “But I didn’t submit that entry because I knew I could catch a bigger fish! This was the catch I was waiting for so I’ll submit this one for the world record.”

MDC staff verified the spotted sucker’s weight using a certified scale at MDC’s Southeast Regional Office in Cape Girardeau. This is the fifth state-record fish of 2020.

Goodale is familiar with spotted sucker and has spent time researching them with MDC as a volunteer.

“I’ve put a lot of homework into this species and I’ve put in a lot of time,” he explained. “They always spawn in April and always spawn in the west side of the pool. They’re a temperamental fish and not that easy to catch. You really need to know what to look for. You only have about a five-to-ten second window once you present them with bait.”

Goodale said his latest record will be used for science.

“I plan on getting a fiberglass replica, but the fish itself is currently in my freezer and will be used for research,” he said. “I’ve got a buddy in MDC’s Fisheries division and we’re going to take a look at the fish and try to age it.”

“I’ve made a lot of memories there and I want to thank MDC for managing the area and fish habitat so well.”