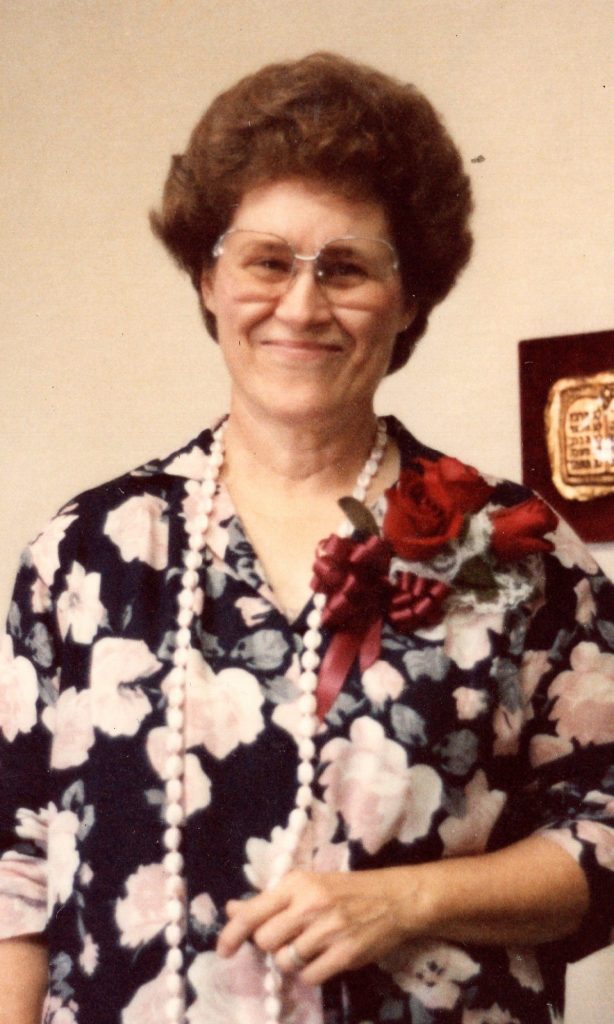 It has been said that life is a lot like a patchwork quilt.  All the pieces together make a beautiful work of art.  This could describe the life of Barbara Annette (Anglin) Mendenhall.  Her life quilt began February 21, 1937, in Shamrock, Texas as the firstborn child of Paul and Zenada Z. (Beach) Anglin.  The earthly life quilt was completed on April 18, 2020, surrounded by her loving family at Drury, MO.

The most important part of her life quilt was the large center block which was her faith and love of God.  Love for her Savior Jesus Christ made her life full and rich.  She loved to worship God, she loved music especially when Kenneth led the music and sang the old hymns.

She added blocks around this center block as she grew up.  As a young teenager, she attended Falls Creek Baptist Camp in Oklahoma where a tall, handsome guy won her heart from the beginning.  She just knew Kenneth Mendenhall was the one God had for her.  After a courtship of about a year August 29, 1954, she and Kenneth were united in marriage.

Barbara sewed her life quilt together with tiny stitches of love and prayer.    She added blocks to her quilt in a tapestry of beautiful colors and fabrics as evidenced by her love of family, her church, and all children.  Barbara was a master seamstress sewing many beautiful items.  She was well known for making precious dolls which brought smiles to countless girls (big and little ones).

Her life was not all beauty, she had to stitch in the sadness of the death of family members; her parents; two sons: David Lee and Robert Wayne Mendenhall, and one daughter Martha Sue (Mendenhall) Lancaster.  She was also preceded in death by two grandsons; Jonathan and Curtis Mendenhall and one granddaughter Katina (Trammel) Clark and two brothers-in-law Robert and Jerry Mendenhall and three sisters-in-law Darlene, Phyllis, and, Diane Mendenhall.

Her life quilt was made richer by the family she leaves behind including her devoted husband of 65 years, Kenneth. Also, her daughter and husband Kathy Aleen and Ronny Dean Trammell who lovingly cared for her as her health deteriorated.   She also had important blocks in her life quilt of her five grandchildren: Rachelle Trammell Jacobs (Colby), Bradley Mendenhall (Angel), Joseph Mendenhall (April), Michael Mendenhall, and Cassie Mendenhall. Eighteen great-grandchildren further enlarged her life quilt and will miss her precious smile and that mischievous twinkle in her eyes: Jazzabella, Ainsley, Archer, Harper, Finley, Danica, Dylen, Zaedyn, Lorraine, Michelle, Violet, Kenneth, Kloee, Leandra, Gabriella. Cannon, Delwin, and Gracie.  She is also survived by one brother, Eugene Anglin (Carol); one sister, Vicki (Anglin) Carlile (Troy), one brother-in-law Joe Mendenhall, and three sisters-in-law, Earlene Whitehead (David), Carolyn Copeland (Tom), and Rita Sneed (Leslie).  She completed the family part of her life quilt with many nieces, nephews, cousins, her church family, and a host of other friends.

A time for friends to drop in at the Ava Family Funeral Home Chapel was held on Wednesday, April 22, 2020, from 2-4 to pay their respects to the family.  Barbara was returned to Seminole, Oklahoma for her burial and a graveside service Friday, April 24, 2020, at 11:00.