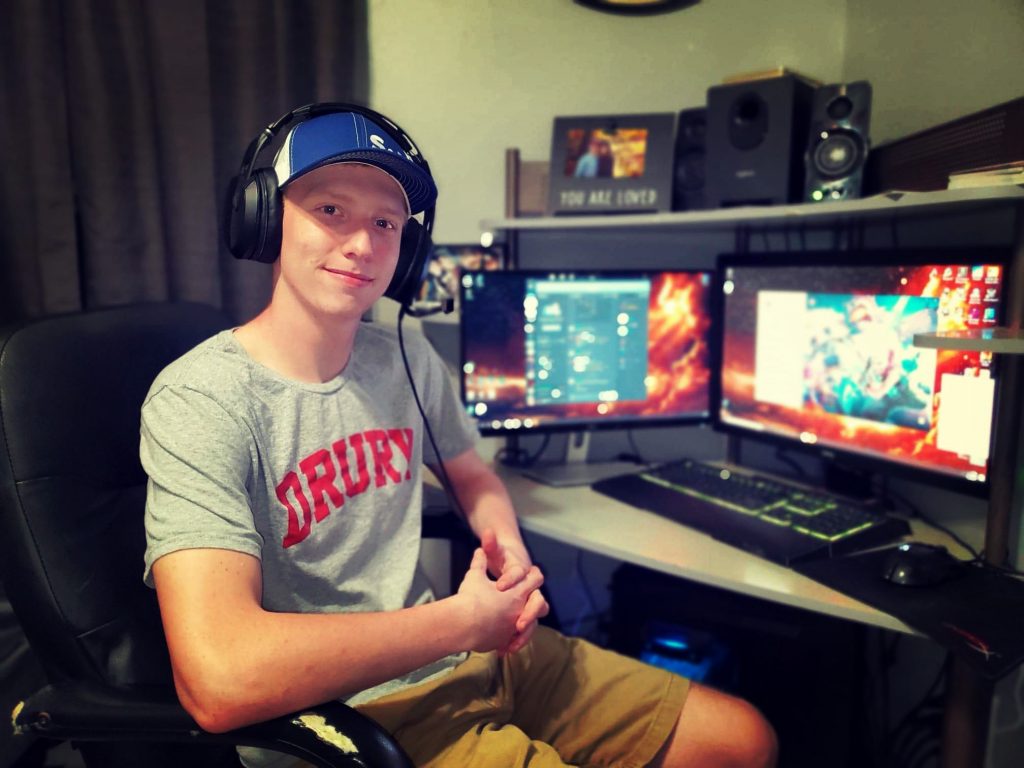 In these interesting times as Americans become introverts at the behest of the government, a group of Americans have taken the time to catch up on their favorite pastime to pass time.

Long before the quarantine Caiden Palmer was eagerly saving up for his first Mass Multiplayer Online (MMO) console. From that point he was on a path to a college education without even knowing it.

As many children did, Palmer spent his off hours gaming in his youth. He was tech-driven and always had a portable gaming console within arm’s reach.

Handheld consoles started with the original “brick.” Before that was the football game where you took a red blip down to the other end without getting caught.

The Nintendo GameBoy featured the ability to play more than just one game. Early titles included Mario, MegaMan, and Link – the adventurer from Zelda.

Technology became smaller and was crammed into a smaller GameBoy as the Pokémon red and blue series came out at the time the anime exploded in popularity on tv.

Color finally came by with the large, one-pound, Game Gear handheld from Sega, which brought Sonic the Hedgehog out of the living room and into players’ hands… via power from six AA batteries.

Fast forward through advancements in tech and into today’s consoles, Palmer used his time to play on his Nintendo DS or PlayStation Portable (PSP).

The new-age handhelds included a new feature allowing gamers like Palmer to actually compete against each other instead of chasing a high score for bragging rights.

Everyone wants the top spot on a leaderboard, but how many just play for fun versus those who play to improve their competition skills?

Legend in the Making

“I desperately wanted to get my hands on the PS4 but it was expensive,” stated Palmer via email. “My parents made a deal. If I saved up half the money, they would pay the other half.”

Palmer turned to the classic money-making tasks teenagers do while too young to pick up a summer job. $200-worth of lawns mowed and household chores completed, Palmer bought the PS4 which – with improvements over time – still holds a place in top gaming consoles today.

Call of Duty is the world-renowned franchise series of games involving modern combat and weaponry. Since the original release on October 29, 2003 the series has grown to 16 main titles

According to gamespot.com Activision-Blizzard is set to release the 17th title this year.

Back in 2015, Palmer was excited at the idea of playing in an MMO game. Then it was Call of Duty: BlackOps III.

“Being able to play with people online created new and challenging gameplay,” Palmer wrote in an email.

The defining difference dividing MMOs and single player role-playing games (RPGs) is taking the computer artificial intelligence out of the equation. Instead of non-playable characters returning fire in a storyline, MMOs have real people playing with or against you.

Unpredictability in player locations, actions, and skill levels make for an environment where you aren’t just the hunter – you’re being hunted as well.

“After playing this game for a while I became very good at it,” wrote Palmer. “I was placed 54th in the world on the Black Ops III Leaderboard. At 14 I was excited knowing I was good at something I put a great deal of time into.”

As did the original release – and every single game since – Black Ops III faded in popularity and players.

Infinite Warfare was released in November of 2016 and it was not the same as Black Ops III for Palmer who was ready to move on from the “lackluster” game.

League of Legends became the next favorite for Palmer, who was introduced to the game by his uncle. The game was developed by Riot Games and was inspired by Warcraft III which also spun off World of Warcraft and the soon-to-be-released Warcraft III: Reforged, but those were developed by Blizzard Entertainment.

The game is a battle occurring between teams and takes place at a neck-breaking pace. For being on a computer, it requires dexterity and quick reflexes amid split-second decision making.

At first, Palmer did not have the computer to support an MMO. Back to saving over a summer he was able to get the parts he needed to build his own gaming computer. The game took him off his feet and sat him down for hours of endless gameplay.

The rest (and his earned money), they say, is history.

Senior year came around and as most high schoolers do, Palmer started to look at his future. During a briefing on types of available scholarships Palmer’s ears and mind locked in on eSports.

Over 100 million play League of Legends online monthly. Plus, the millions more worldwide who play on different games and consoles for play.

There are hundreds of millions of players enjoying World of Warcraft, Call of Duty, Battlefield, Fallout, Fortnite, PlayerUnkown’s Battlegrounds (known as PUBG) and Minecraft… just to name a few.

“Right then and there I knew I was going to attempt (to get a scholarship),” said Palmer. “I toured many schools and quickly found out I was good enough to (get one).”

Beginning to focus on a single school, Drury University stood out among the options. After meeting the coach – yes, they have coaches – he felt more comfortable nearby.

At the end of the day, Palmer received a substantial scholarship to help pay for his college education.

Learning on the fly, just like in the game, Palmer found that potential eSports gamers are looked at in a similar way a traditional athlete is.

Coaches are looking for “coachable” players who know how to play as a team, while also being a team player.

It also helped for Palmer to have achieved Platinum 2 status in League of Legends, which accounts for only the top 1.2-percent of gamers using the game.

10,000 attended in-person while another 600,000 watched online… and it continues to grow as corporate sponsors like Nike, take note.

However, with the wide world of gaming still in its early years as the globe continues to connect, Palmer is likely to be the first and only student from Ava to land an eSports scholarship.

“I still cannot believe that I have been given this opportunity to join Drury University’s eSports program.”