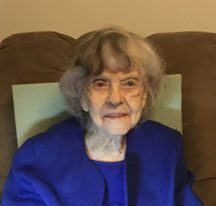 Tura is survived by her four children; David Vandervoort Rayne Wagner, Judy Cormier and Betty (Vandervoort) Bennett and many grandchildren and great grandchildren.

Tura S. Covill was desiring to remain alive until the Lord Jesus would come in the clouds to take her to Heaven. She is not in Heaven now nor does she hear or speak to anyone alive today, but rests in this grave until Jesus comes again soon. She was not able to make it alive at his coming, but her wish was that she might be a witness to her relatives and friends, and all that knew of her, that the seventh day, Saturday, is the Sabbath of the Lord God and of her desire is that all of you would keep it as part of the Ten Commandments. It is not a Jewish law but an eternal law from the creation of the world when God (The Father, Son, and Holy Ghost) rested from the labors of creation and blessed, Sanctified and made the seventh day holy (Genesis 2:2,3).

Jews and mixed multitude were told that there would be no manna on the seventh day, which is the Sabbath (Exodus 16:26) 30 days before the Ten Commandment law was given on Sinai.  Abraham kept God’s commandments (Genesis 26:5) long before the Jewish race ever existed. Paul in preaching  to the Gentiles instructed them of the fourth commandment in Hebrews 4:1, on the seventh day, about God resting from all his works.

He preached to the Gentiles on the Sabbath (Acts 13:42,44). It was not until 300 years after Christ had risen that the church on its own decided to honor Christ’s resurrection by their own traditions rather than keep the words of the Bible to honor the seventh day. (Matthew 15:3) They did not want to be associated with the Jews and Roman people who killed Christ so they decided to honor Christ’s resurrection, even though Jesus, nor the Bible, nor the disciples honored it. Her wish is that you keep the seventh day Sabbath. She does not want any one of you to be with the lost when Christ returns for his saints who have kept all of the commandments. (Rev. 14:12). Thank you all for coming.

A private family graveside for Tura will be Thursday, April 23, 2020 in the Ava Cemetery. Due to the health crisis related to Covid-19 and the Missouri mandate her service will be limited to Family. Officiating will be Chaplain, Gary Fry. Family requests memorials be made to His Vine Free Seventh Day Adventist Church, Red Boiling Springs, TN, www.hisvinefreesdachurch.org.  Online condolences may be made to www.clinkingbeardfuneralhome.com.