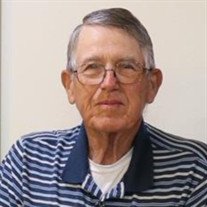 Donald E. “Archie” Ladd, age 81, of Sparta, passed away in his home Tuesday, April 14, 2020. He was born June 6, 1938 in Sparta where he lived throughout his life. Archie was the son of Herbert and Lula (Johns) Ladd. He was a 1956 graduate of Sparta High School, and a proud member of the Sparta Basketball Team which won the State Championship in 1954. He enlisted in the U.S. Navy and served for 4½ years in Naval Air Command. He spent the majority of his military service stationed in Beeville, Texas, where he was trained to fly and remained in that duty station until his honorable discharge.

Archie had raised cattle since he was 15 years old, and farmed until his death. He prided himself on raising quality beef cattle. Archie enjoyed helping young farmers improve their herds. He had also worked in the plastics industry for 35 years.

Archie never met a stranger and always had time to visit. He had many interests, but his granddaughters were the special light in his world, and he always enjoyed sharing their pictures with friends.

He was preceded in death by his parents, a sister Shirley Brown, and a great-niece, Gina Phillips.

A graveside funeral was held at 11:00 a.m. Friday, April 17, in Sparta Cemetery under the direction of Adams Funeral Home.