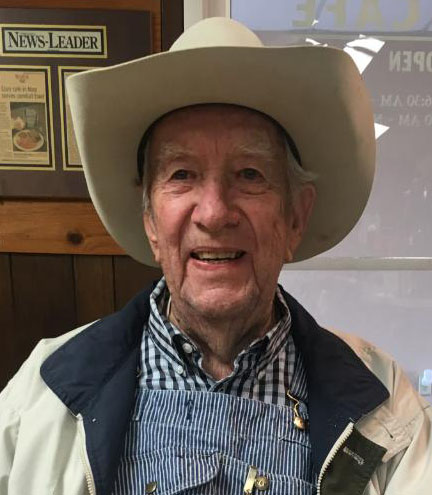 Donald Eugene Walker, age 91, passed away peacefully at home on March 18. He was born March 13, 1929 in West Dogwood, MO to David Earl and Emma Armada Walker, and was united in marriage on November 3, 1951 to the love of his life, Lois “Maxine” Wade.

Don grew up on the family homestead in Dogwood with his 4 siblings; Doyle (deceased), Doris McCarty (deceased), Fern Huffman and Dwight Walker. He graduated from Ava High School where he was a starting player on the state championship team in 1945. He loved sports all his life and was an avid Lady Bears fan.

Don was a residential builder by trade, building hundreds of homes, but a cowboy and outdoor sportsman by heart. He rode cutting horses most of his adult life and loved to compete…he trained and rode a world champion horse named “Teko”. He had oodles of bird dogs and never missed an opening day of quail season, often accompanied by his good buddies Leroy Uber, Bill Harding, and Harold Carter. One of his proudest moments was a national championship with his bird dog “Sis”. He was even featured in the Missouri Conservationist magazine in 2005!

He loved people – never met a stranger and was always willing to help anyone in need. He enjoyed attending the Finley River Cowboy Church and North Nixa Baptist, but his absolute favorite place to gather with his many friends was the “Sale Barn”! He was a charter member of the “Liar’s Club” at the NLA Café, telling jokes and tall tales with Jerry and company.

But nothing was more important to Don than his family. He and Maxine were happily married for 59 years until her passing in 2011. He was a wonderful brother, and his sister Fern was his lifelong best friend. He was a devoted father to his three boys and attended their every school and sporting event, and stayed close to them and involved in their lives until their deaths; Danny in 2010, Terry in 2012, and Ronnie in 2019.

He is survived by his daughter in law Sharman Walker Bennett and husband Andy of Rogersville, his grandchildren and great grandchildren whom he loved deeply; Melissa Vander Syde and husband Jeff of Colorado Springs, CO, Mandy Walker of Nixa, Krista Johnson Westfall and husband Harvey of Springfield, Stephen “Bubs” Walker and wife Maddie of Springfield, Bethany Perry Hoffman and husband Damien of Kansas City, and Emmie Lou and Stevie Kate Walker of Springfield. His sister, Fern Huffman of Ava and brother Dwight Walker and wife Jeannie of Mountain Home, AR, as well as many cousins, nieces, nephews, and an abundance of friends. He was such a loveable guy!

Papst, as he was known to his family, spent his last years at home with the help of his granddaughter Mandy and wonderful caregivers, Diana, Faith, Patty and Vawn, and his loyal and loving dog, Dolly Gene.

Saying that our Papst will be missed is just an understatement.

A private graveside service for Don will be held at Rivermonte Cemetery under the direction of Adams Funeral Home, Nixa.

A Celebration of Life will be held in his honor at a later date.