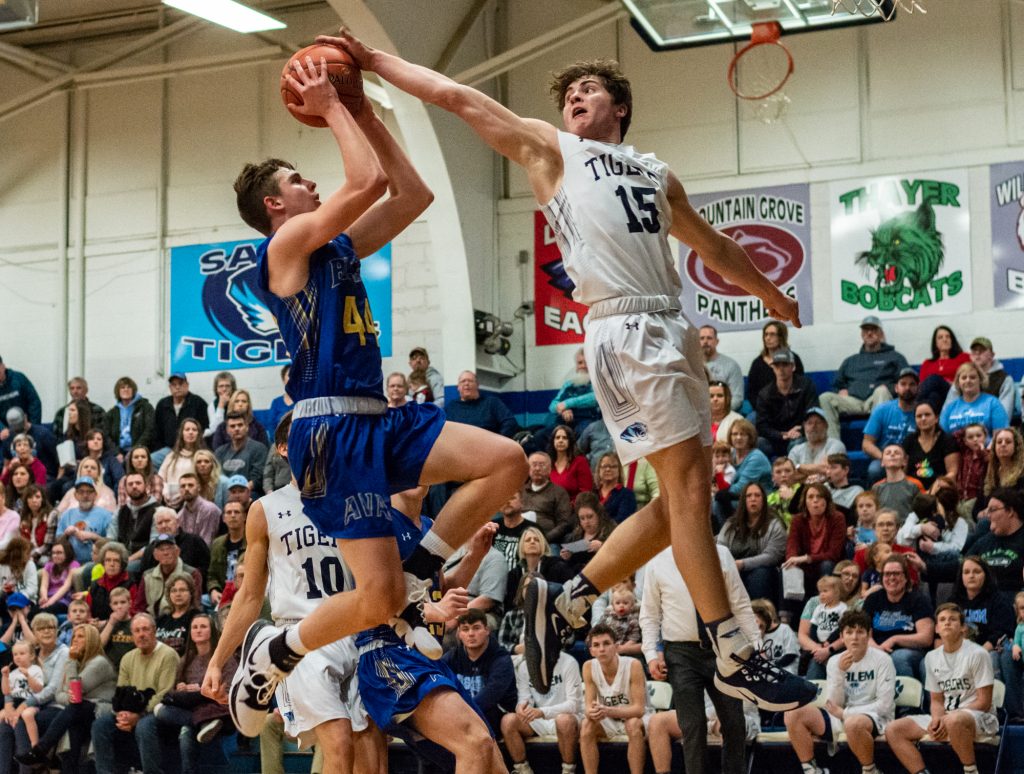 The Bears started the season in the worst way manageable for the basketball team. Seniors and starters were benched early in the season as the school’s football team soared to new heights with the town’s first-ever trip to the state championship arena.

It meant a new coach, with a new way of doing things, wouldn’t practice with a full squad for nearly a month.

Ava had graduated Drake King, Thomas Emerich, and Caleb Johnson over the past summer.

Between the three seniors, more than 300 points in a season moved on with them.

Any way an analyst could slice the situation, it looked like a rough year for the Bears.

The match against the Gainesville Bulldogs was an anticipated loss with Blake King, Nate Swofford, Zach Mendel, Dylan King, Bryce Dodson, and Kayden Myers remaining in warmup attire as relievers took to the court, against a more seasoned varsity opponent.

Quinton Donley and Jacob Gillies both said, “no.”

He went on to hit four threes while Jacob Gillies drove the lane for six buckets inside, both with 12 points each at the end of regulation.

Both set their season-highs in threes and twos, respectively.

The double-digit scorers were paired with 14 points from Andrew Dalton, leading Ava through a late comeback to earn the first win, 52-51, at the final horn.

Even with the starters returning for the second game of the season against Norwood at the Annual Mansfield Lion Invitational, the Bears kept pressing at both ends of the court and won their first piece of hardware for the season.

The Bears took their first loss against Fair Grove and bounced back with wins over Forsyth and Carnahan before making it deeper into the Blue & Gold than any team before them with an overtime upset against Hillcrest. The Bears stayed alive, fighting through double OT for the 81-74 win.

It caught a lot of people’s attention. The Bears proceeded to a third game. They lost against Lebanon but went on a five-win streak right after the season picked back up after the holiday break.

Coach Seiger had finally had the opportunity to put the final cogs and gears into the machine which would take Ava’s historic year even sweeter. 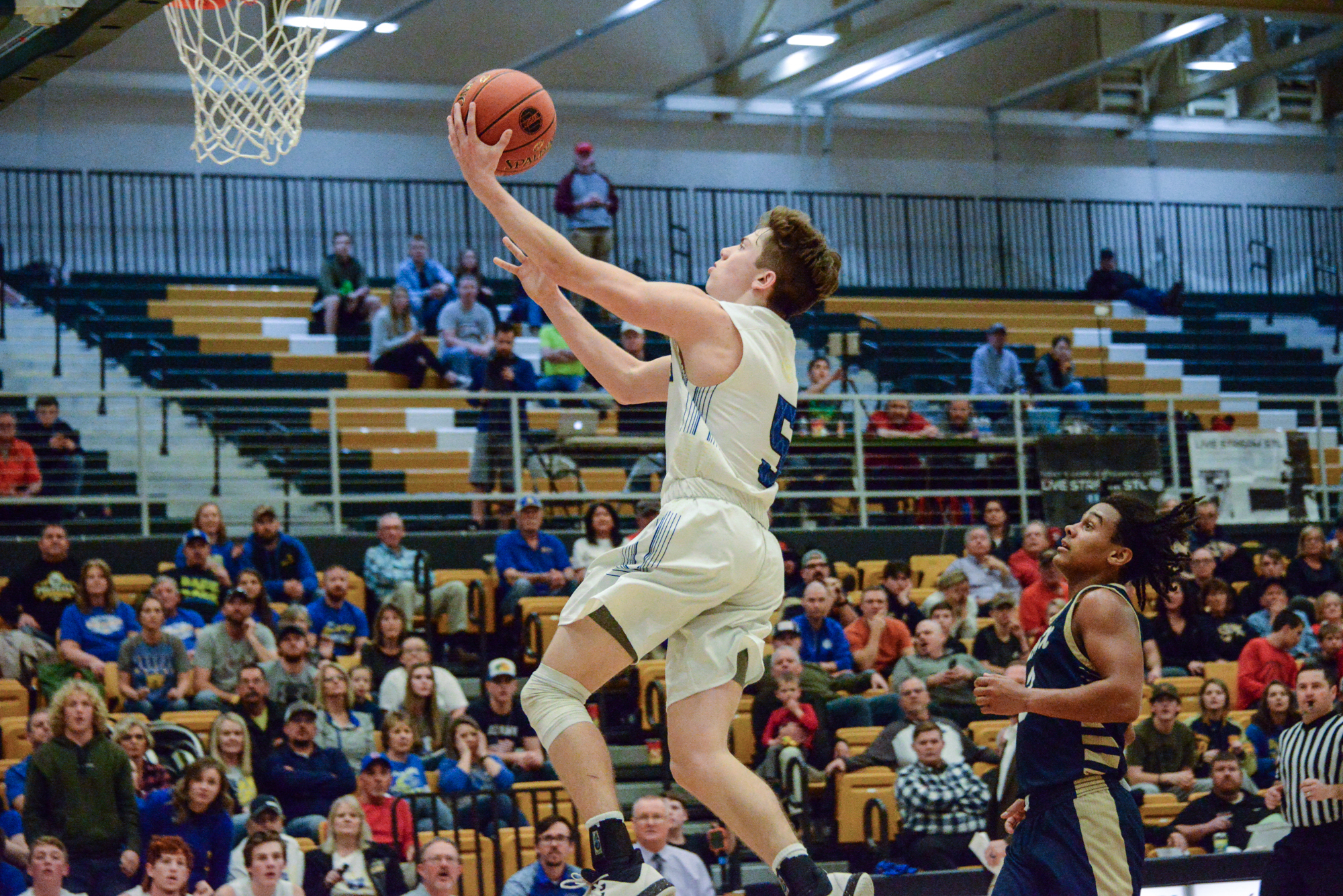 In the SCA, the long-awaited conference title won by the Bears (6-1), was the first time Ava brought home the hardware since the 2011-2012 season under Nathan Houk.

The dominance in the conference led to individual accolades bestowed on four players.

Dalton was named SCA Player of the year. With 580 points this season he made his 1,000th point during his sophomore year and carries a career-total of 1,066 points. This year’s numbers came from 199 buckets inside, 17 from the arc, and 131 points taken from the charity of opponents this season, shooting 80-percent from the stripe.

In addition to all of that, he was also named to the Class 3 District 4 All-District team along with senior Nate Swofford.

Swofford put in the work for 280 points this season, topping off his career at 580 since he first played on the varsity squad his sophomore year. His numbers come from 70 twos, and 31 three-pointers his senior year. He also stole 47 points from the line, shooting at 72-percent this season.

Swofford had SCA First Team honors bestowed up on him.

Senior Blake King also departs the Bears this year, taking SCA Second Team honors with him. The senior scored 747 varsity points in his career, 317 in his senior year. Second in three-pointers (35), with 84 twos and 44 free throw points in his name, the departing senior was second in overall points this year.

Up-and-comer Kaden Bruce has been at the point consistently this season, trading out with Swofford when it came time to rest legs. Bruce earned an Honorable Mention in the SCA.

Bruce made 137 points this season, taking advantage to the openings inside the lane for 32 buckets in addition to 15 shots from outside with another 28 points at the stripe. He and Dalton return next year.

Ending the overall season at 24-6, this year’s team made it beyond the SCA, and past the MSHSAA district – where they became the first Ava champs since 2010-2011 under coach Cole Dishman.

Like the football team – many on the basketball squad – this year’s Bears made school history. For the first time since books were kept in 1949, the boys’ squad won the sectional game with a nail-biting, 57-56, win over the St. Pius X Lancers at the Missouri S&T campus in Rolla.

All good things must end, though. Even with the 79-56 loss to the Charleston Blue Jays – a school synonymous with winning seasons and state titles – the Bears made a brand-new section for Larry Silvey to include in the annual record.

The 2019-2020 academic year’s athletic program has set a high bar of success for future players to meet.