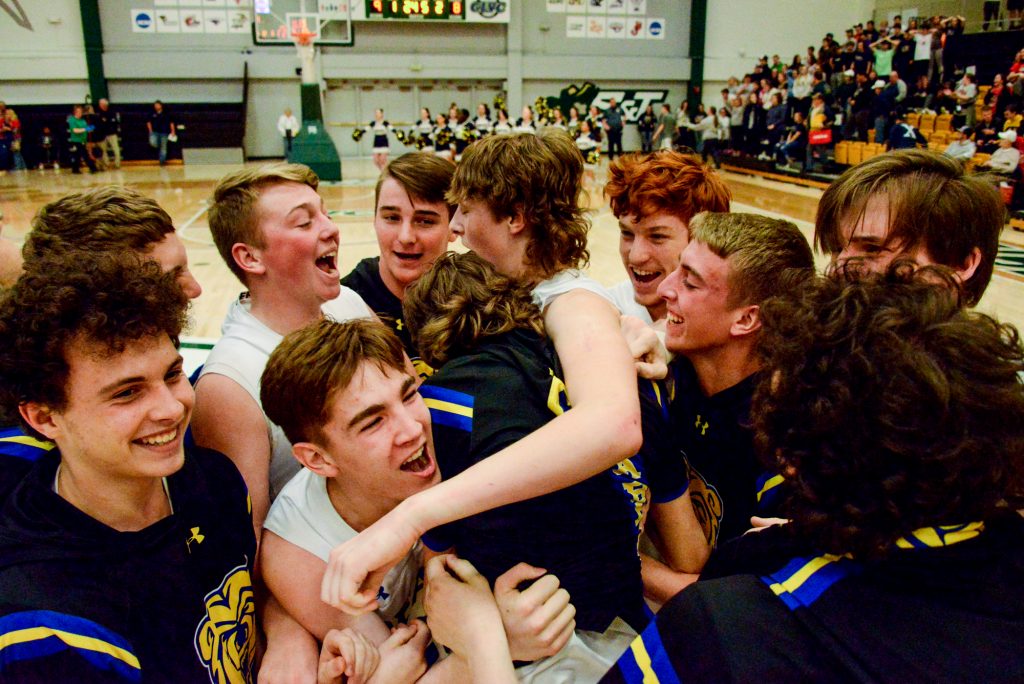 ROLLA– There are no ties in basketball, especially in the Missouri State High School Activities Association postseason. One point can make all the difference between progress and the end of a season.

Finishing it was the defense’s battle cry as they kept tabs on Kayden Cook, who put up 19 points for the Lancers last Wednesday.

Playing the point with dribbling skills and speed, the Bears needed to hold a thumb down on him to prevent another miracle shot like the one he took at the horn in the first quarter.

In addition to the fast-breaking player the Bears had to watch the post where 6’7” Lancer senior Riley Naeger was working for the entire 32 minutes of game play. Putting the ball in the bucket with little effort deep in the paint, an inside pass was not to be allowed.

At the horn, the defense did their job and held off the final St. Pius X attack to squeak away with a 57-56 victory in the Class 3 Quarterfinal round at Gibson Arena on the Missouri S&T campus in Rolla.

Even though the Bears held the lead for nearly 23 minutes, it was trailing by four with 3:31 left in the game which pumped the suspense into the arena. Eli Boyer drew the shooting foul from Zach Mendel and hit both free buckets as the game neared its end.

It was not until near the two-minute mark where senior Nate Swofford stepped up with a steal resulting in the fast break and a layup bringing the Bears back within two. It was on a foul drawn from Cook which Swofford took advantage of to tie the game at 53 with 93 seconds remaining in regulation.

Then the Lancers took it back on a foul given up by Blayne Mendel, Naeger making both free throws to make it a two-point game once again. Andrew Dalton came up with a two-point fast break layup to knot it at 55 before Blake King picked up the offensive rebound for two plus the and-one foul on the shot.

The Bears lit up with energy as King and Kaden Bruce screamed at the top of their lungs to celebrate a new lead with 50 seconds left.

Swofford gave up a late foul sending Cook to the line. He missed one but put the Bears and his Lancers in particularly precarious situation.

Coach Damon Seiger took a 60-second timeout to rally the team and discuss the endgame plan. King received the ball and was fouled by Michael Bollinger but missed the first free throw on the one-and-one.

11 seconds left and the Lancers had possession. Naeger was shooting at 50-percent from outside and took a crack at the hoop before it bricked back into the paint. Cook was there for the offensive rebound, but his miracle shot never made it. 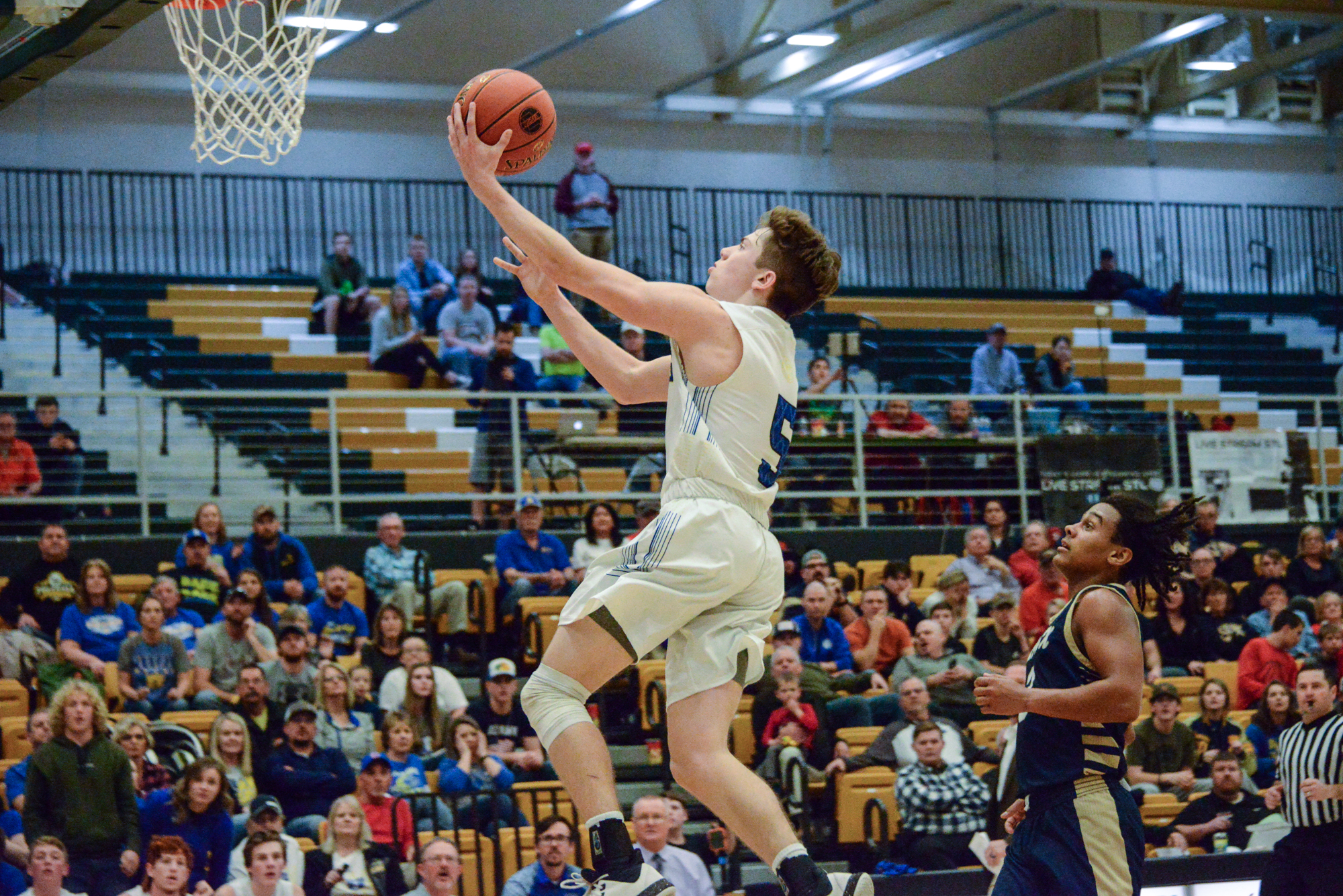 Nate Swofford was the hero of Wednesday’s game, scoring 22 points for the Bears. The senior opened up the game with a three pointer from the wing with Blake King delivering the assist. From there the Bears charged on with a seven-point run before Cook made that first miracle shot with one second left, ending the quarter with Ava leading 20-15.

In the fourth Swofford returned to the floor, replacing Bruce who just gave up a frustrating turnover to Cook. Swofford was able to break into the Lancer defense and make a layup in the paint tying the game for the sixth time at 48 points.

In total the senior drew five fouls and only gave up two, shooting four-of-six at the stripe in addition to his six buckets inside and two from the arc for 22 points leading the Bears with a nine in the plus-minus column. 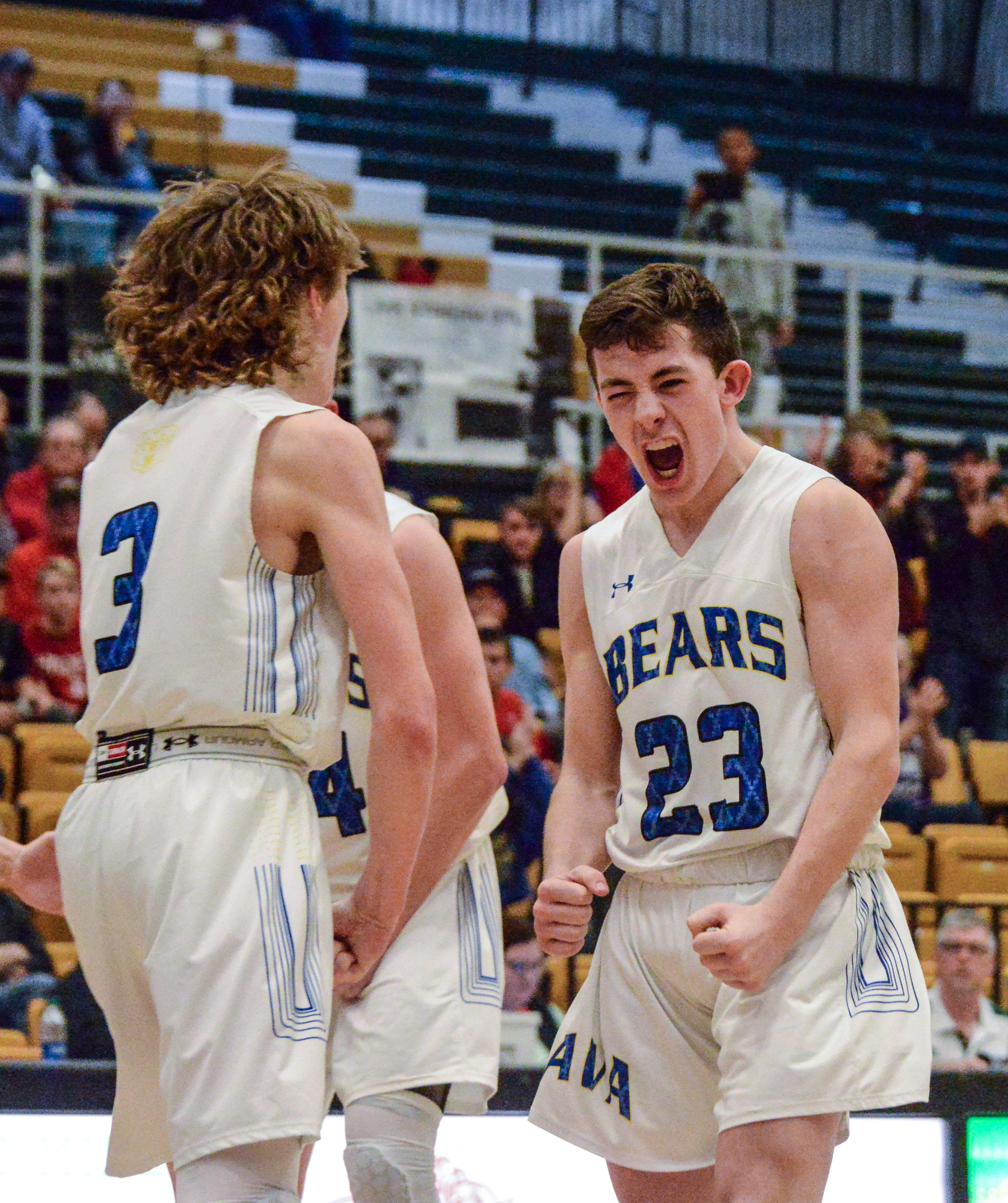 Ava High School ‘s Kaden Bruce (23) is fired up by Blake King’s late game bucket which put the Bears back in control of the Class 3 Sectional game against St. Pius X on Wednesday, March 4, 2020, in Rolla, Missouri. (Jason Hoekema/Herald)

In the first quarter the Bears were shooting at 82-percent, making nine of their 11 attempts at the bucket. This outpaced the Lancers who shot just six-of-12 in the first.

Then it suddenly plummeted in the second.

The Bears struggled to get the ball in, shooting 36-percent for just four buckets. Three free throws were the difference as the Bears marched into the locker room with a 31-28 lead after letting the Lancers get them with a 13-11 second quarter.

Ava returned and took the third with an end score of 46-41 but shooting efficiency wasn’t where it was earlier in the game. The Bears were hitting the bucket about two-thirds of the time in the third while the Lancers were gaining traction by nailing three from outside.

Ava was again outdone in the fourth with St. Pius X winning the quarter 15-11. Both teams were identical from inside shooting 44.4-percent, but it was two three points hits and five points given up in fouls which caused the Bears to fall behind.

Even if it was for just for five minutes, it was agonizing for the Ava fan base in attendance.

Overall the Bears pounded the ball into the paint scoring 40 points from inside while the Lancers struggled to break in with 14. Offensive bursts allowed Ava to pick up points on 12 fast breaks while St. Pius X trailed with seven of those opportunities.

The work inside by the Bears was able to null the ten shots from the arch made by Lancer shooters with Cook, Boyer and Naeger hitting the net from Broadway four, three and two times, respectively.

Ava bounced back and narrowly kept the lead at the horn, advancing even further into the postseason and the history books as Ava High School celebrates a historic athletic year involving two separate trips into state tournaments.

With fresh district and SCA titles in-hand, the Bears have won their first sectional game in school history since records were kept starting in 1949.

Swofford led with 22 points shooting eight of 15, seconded by Dalton with 20 points making nine of his 13 attempts. In rebounding the teams were both nearly identical with the Bears making just one more offensive rebound than the Lancers.

Both teams shot 60-percent from the stripe with Ava drawing 17 fouls and giving up 15 through 32 minutes.