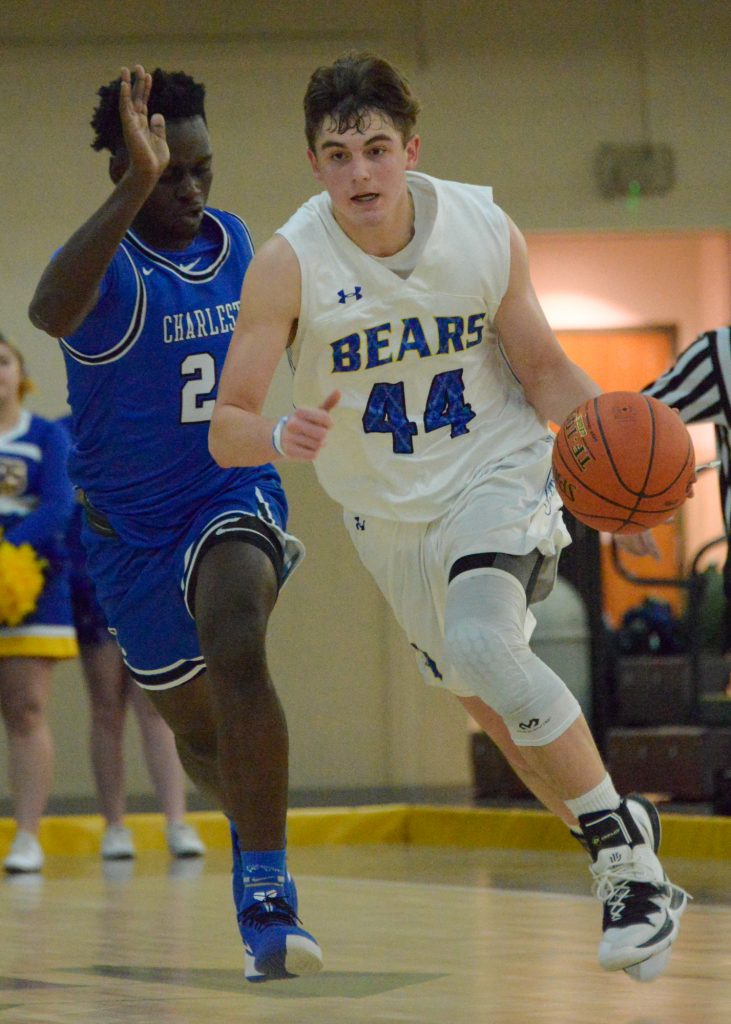 Ava High School's Andrew Dalton (44) rushes a turnover to the other end of the court during a MSHSAA Class 3 Quarterfinals game versus Charleston High on Saturday, March 7, 2020, in Farmington, Missouri. (Jason Hoekema/Herald)

FARMINGTON–End of the winding road seemed an appropriate take given the directions provided to several fans by their phones’ GPS apps. Many set their phones to take them to Poplar Bluff on the return trip, a far safer route with less whiplash.

Unfortunately, at the end of the road lay the final game in the 2019-2020 Ava High School boys basketball season.

In the end, the Charleston Blue Jays’ squad was the better of two talented teams. The Bears fell to the St. Louis satellite town, 79-56.

This postseason, fair was fair. Ava fell to another public school, not a private campus without funding or districting restrictions.

The Bears quickly fell behind the curve in the first not knowing what to expect from the Jays. Charleston blew up the board with 21 points in the first leaving Ava behind with seven.

The Bears had a spark in the second quarter as the offense started to penetrate into the paint with six buckets before the break in addition to three made from the stripe between Blayne Mendel and Myers.

The Bears refused to go quietly, topping the Blue Jays 15-12 right before the break. The Jays fell behind after a Fastbreak and dunk by Rico Coleman, perhaps with pride interfering with the game.

After the break, however, they came out with a boom. They all slapped the floor simultaneously as Blake King made the inbound pass to start the second half. Then they went on to make 20 points over Ava’s 13 in the third quarter.

As they saying goes, you dance with the one who brought you. The ball was going to Dalton every chance the team could get. With him shooting on euros left and right, the sophomore actually outscored anyone on the Blue Jay bench with a game-total 27 points.

With that in mind, the Jays had four, talented, double-digit scorers on their 15-man roster who scored 58 points between them. Meanwhile, senior Nate Swofford blew up once again this post season and put 13 points on the board with five buckets and three free throw points.

Had the numbers of shooters on the roster swapped, it is possible the Bears could have continued on.

As in the second quarter, the Bears refused to go silently and scored 21 points in the fourth, many scored in the JV vs. JV endgame session.

On the court to close out the season as the starters and seniors looked to their proteges was Zach Mendel, Blayne Mendel, Dylan Sawyer, Payton Evans, Dylan Sawyer, and Bryce Dodson playing in their possible future roles as the Ava Bear basketball program marches on in progress.

The Bears have set several records this year and ended droughts, some of which have not been touched since the 1950s.

This year’s squad moves into fifth for best winning percentage since records were first documented in 1949. The same season Ava became part of the South Central Association Conference.

At 24-6, the Bears and coach Damon Seiger top the 1971 record set by the team under coach Truman Smith and settle into the top 5 records in Ava history.  They also cut into line with most field goals made in a single game.

They destroyed Dixon with 41 field goals in the opening round of the district tournament moving this year’s squad into second place in Ava history. This team is literally one away from the most field goals made in a single game, which was set by the team in 1991 against Cabool.

Strongest in the first and fourth quarters, the Bears had an effective field goal percentage of .542 averaging 22.5 FGs per game.

That number is broken down into a 17.8 two pointer per game average and the Bears hit the net from Broadway on an average of 4.7 long balls per game while averaging 60.4 points over 30 games this season.

Those defensive rebounds led to Andrew Dalton scoring in transition on a 3.1 times per game average through the season. He is seconded by departing senior Nate Swofford who averaged 3.1-percent with fast breaks and making points before the opponents could establish defense.

Senior Blake King comes in third on the breakaway averaging 2.4 points in transition per game.

Dalton led the Bears in overall points-per-game average (PPG) of 18.6. That is his role on the team, and we will also look at some other players who have specific roles often overlooked.

Blake King averaged 11.1 PPG and Swofford put up an average of 9.2 PPG while Gillies and Myers hit 4.4- and 2.6-percent, respectively. Next year’s possible starters include Donley making 4.1 PPG in his specific capacity around the arc.

Kaden Bruce may be the man at the key in the 2020-2021 season, this year he took advantage of openings in the paint scoring and average of 4.4 PPG as the player who sets and starts the play motion.

Zach Mendel averaged 3.3 PPG and Blayne played for a 3.8 PPG average. One JV player to keep an eye on is Bryse Dodson who might not have the height but can be solid in the post. In spite of not playing as many games as the starters and relievers, he shot with a 62.5 eFG% and made about one PPG while seeing limited time on the maple.

During the ongoing season with two games per week (four total with the girls’ season), defensive contributions are often overlooked as the offense takes the stage and most of the limelight.

Behind the scenes are the same players, some specialists on defense, who make opportunities possible for the offense. The Bears defense managed to grab 71.2-percent of defensive rebounds, creating ample scoring opportunities.

Gillies may have only shot an average of 4.4 points-per-game but he took 13 charges this season… those called as such. He took the hit more often than officials called it so. On top of that, his height served well as a rebounder while also getting the chance to deflect eight shots and perform thievery 15 times, stealing the ball from the opponent.

Blayne Mendel took eight charges this year, again with more than the whistle counted. Specializing in the transition with speed and agility, he wrestled the ball away for 20 steals and was in the opposing team’s pass route for 15 deflections.

In the world of thievery, it wasn’t Dalton who led in steals. In fact, someone needs to call the cops on Kaden Bruce because he stole basketballs 34 times this season. Again, a testament to players who aren’t always playing it to the steel. Bruce is also quick on the fly, making 40 deflections.

Dalton was as instrumental on defense as well as he was on offense with 27 steals, many on shot blocks and theft along the baseline. Also a quick player, Dalton was in the right place at the right time 27 times to deflect passes and play action from opponents.

Swofford is another one of those players who stands out in both sides of the stat book. With 22 deflections and 23 steals he was a formidable force on the court and held the third highest average of points in transition, averaging 3.1 points per game. He also took seven charges this season.

Blake King was certainly a threatening shooter, inside and out. He was, however, responsible for 17 steals and deflections in his senior season and has the speed to earn an average of 2.4 points in transition per game.

Senior Blake King and sophomore Andrew Dalton both have climbed up and into the books this past season.

Dalton, a special talent on the Bears’ squad, moves into tenth place for most career points in his second year. He will likely surpass the top slot held by Pete Leonard, who scored 1,744 career points from 2007-2011.

King has also made his mark in the book with a career total of 788 points putting him in Ava’s historic top 20, tying Nate Brusselback from 1993.

Dalton and King also moved up in the most points in a single season column. Dalton slides into fifth with 580 points this season and King surpassed Lyman Platt from 1982 with 317 points his senior year.

The two part ways in the history books, Dalton coming up just shy of knocking his previous year’s average of 19.1 PPG with an 18.6 this season. Both of his records sit within the top 15 in school history.

King goes on to another historic list with 127 career three-point shots to his name. He is now second in the record book only to Trae Shelton from 2011.

Even though the road came to an end it went many times further, many different ways. As coach Seiger tweets, “#TheBestIsYetToCome.”