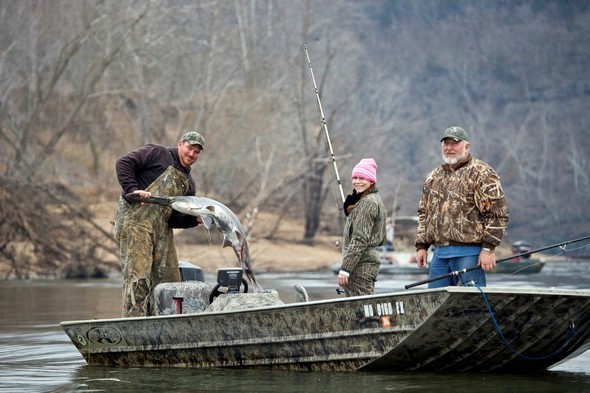 JEFFERSON CITY, Mo. – Imagine catching a giant, prehistoric fish whose ancestors swam during the time of dinosaurs. That is a reality for thousands of paddlefish snaggers during Missouri’s annual spring paddlefish snagging season. Paddlefish — named for their large, paddle-shaped snouts — are an ancient species that can grow to seven feet and weight more than 100 pounds.

The season for the Mississippi River is March 15 through May 15 with a fall season of Sept. 15 through Dec. 15.

Unless exempt, anglers must have a current fishing permit to snag or to operate a boat for snaggers. The daily limit is two paddlefish and snaggers must stop snagging for any species after obtaining the daily limit on Lake of the Ozarks and Truman Lake and their tributaries, and the Osage River below the U.S. Highway 54 bridge. Once a legal-sized paddlefish is caught, it must be kept by the snagger and included in their daily limit.

Additionally, paddlefish or their parts, including eggs, may not be used for bait.

MDC reminds snaggers that it is very important to immediately release sublegal fish for future harvests and offers these tips:

Use landing nets, not gaffs, which can kill young fish.

Never put fingers in the gills or eyes.

Remove hooks carefully and get undersized fish back into the water as quickly as possible.

According to MDC Fisheries Management Biologist Trish Yasger, the 2020 snagging season should be good.

“The extremely large 2008-year class of fish is now 12 years old and will continue to provide good numbers of fish for snaggers to harvest,” Yasger explained. “Snaggers should expect to see a lot of sublegal fish from the extremely large stocking in 2016. These fish are now four years old and won’t begin reaching the 34-inch minimum legal length limit until 2023. Please release sublegal fish unharmed immediately and gently as these are the fish you will be harvesting over the next several years.”

MDC has completed a five-year paddlefish tagging project to help monitor paddlefish numbers and improve species management. For the project, MDC staff placed metal jaw tags on thousands of paddlefish in Lake of the Ozarks, Truman Lake, Table Rock Lake, and the Mississippi River. Staff also implanted transmitters in 100 paddlefish at each of these locations to track their movements and gain other important research information.

MDC asks snaggers to NOT remove tags or transmitters from sublegal paddlefish.

Yasger added a “thank you” to all the snaggers who returned tags during the paddlefish tagging project.  “Please continue to help us monitor and better manage paddlefish by reporting all tagged paddlefish that you catch,” She said. “Together we can keep snagging great for many years to come.

Report fish with jaw tags or transmitters by calling 573-579-6825 or by calling or e-mailing Trish Yasger at 660-530-5500 or Trish.Yasger@mdc.mo.gov. Snaggers can keep the silver jaw tags. MDC just needs a picture to verify the tag number. Report sublegal fish, but please do not remove tags. While supplies last, MDC will send an “I Caught a Missouri Paddlefish” t-shirt or hat to those submitting a tag.