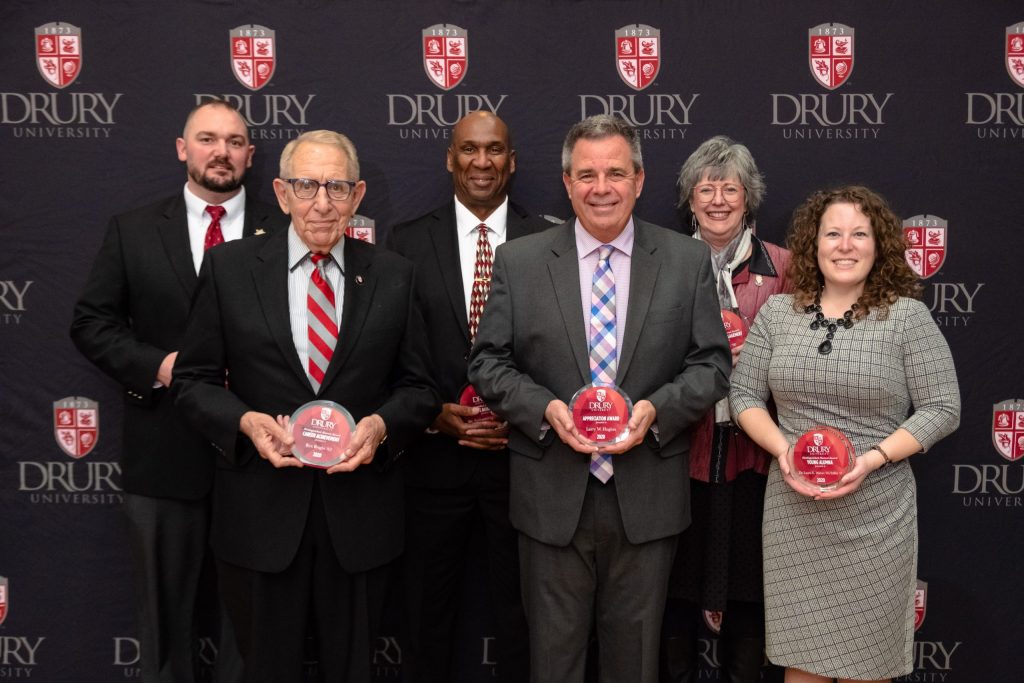 The Distinguished Alumni Awards were founded in 1951 to recognize individuals who have achieved professional and personal successes, shown their loyalty to Drury University, and demonstrated exemplary service to their community. Nominations are taken from the Drury community and the Alumni Council selects the honorees.

Nate Quinn knows the power of a hard day’s work. Recruited by Drury University to play basketball, he was a pivotal member of the 1979 NAIA National Championship team. Earning his Bachelor of Science in Physical Education and Biology, the win catapulted him to his first post-grad job, assistant men’s basketball coach at, then, Southwest Missouri State University. But the classroom was calling and Quinn spent the next 29 years as a teacher, principal and administrator for Springfield Public Schools, retiring from the district in 2013. Today, he is currently a professor in the Department of Counseling Leadership and Special Education at Missouri State University.

Drury University is Beth Pile’s happy place. A member of the Drury Board of Trustees since 2011, the Arlington, Virginia, resident has the pleasure of frequent trips back to her alma mater. In Washington, D.C., she serves as a mentor and adviser for interning Drury students, grad students and visiting faculty. By day, Beth used her Bachelor of Business Administration to become a founding member of Promontory Interfinancial Network, serving as its chief risk officer. Prior, she served nearly two decades with the federal Office of the Comptroller of the Currency, leaving there as deputy to the chief of staff.

Rex Bright has done it all – and then some. After more than three decades in the health care industry, multiple decades as a start-up and turnaround CEO and much time spent serving on the boards of multiple public companies, Bright retired in 2012 and takes it a bit slower these days. Bright used his Bachelor of Arts in Business Administration to get his big start at Johnson & Johnson Co., working his way up the ladder over 19 years in the dermatology business unit. Most recently, he founded Seabright Associates, a consulting firm that worked with other chief executive officers to create and develop senior management teams.

Roye Cole has a heart for children. It’s evident is all aspects of his life. By day, he heads up the Webster County Sheriff’s office and by night he’s father to three kids, coach to multiple sports teams and leader to youth groups at his church. A graduate of Drury’s Law Enforcement Academy, Cole worked as a Drury security officer as her earned his Bachelor of Science in Criminology and Psychology. As sheriff, he went back to school to earn his MBA, using that knowledge to successfully campaign for a new $18.6 million Webster County Justice Center.

Laura Waters knew from an early age she wanted to be a pediatrician. Receiving her Bachelor of Arts in Biology, she used Drury’s early acceptance program to complete her training at Saint Louis University School of Medicine. She set out to put her skills to use, not just in the Queen City at Mercy HealthTracks clinic, but also worldwide. Since 2006, Waters has traveled to six countries in a total of nine trips. When not traveling the world, she’s spent much of her time at Drury over the last several years, first as part of the Alumni Council and then again as an MBA student.

The Drury University director of bowling and head women’s bowling coach has made his home on the lanes for more than 40 years. The Springfield Bowling Hall of Famer helped found both the Nixa High School and Drury bowling programs. He was coach last year when the women’s team lost one of their own in a tragic car accident, helping the team pull together and find ways to remember their friend. By day, Hughes has worked in asset management at U.S. Bank for the past 27 years.