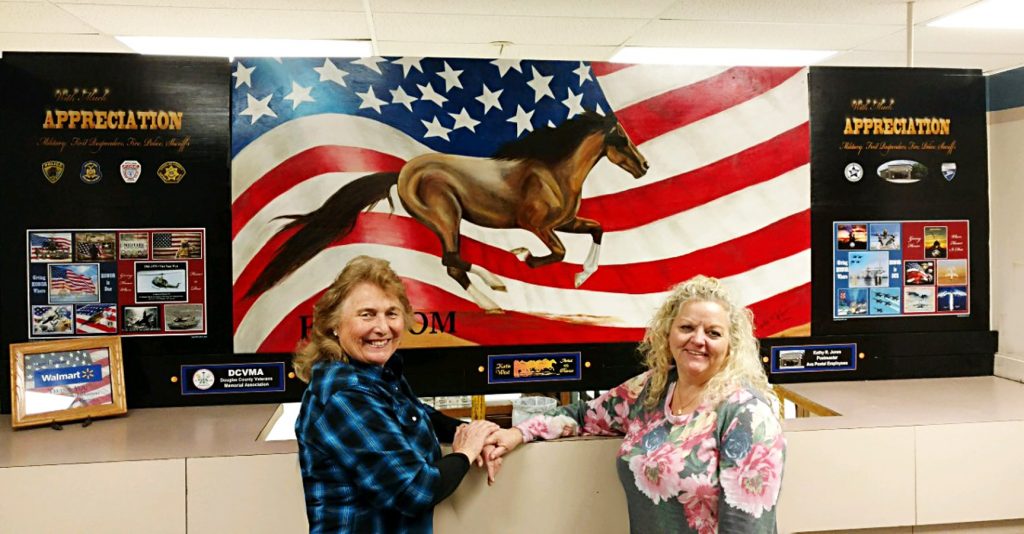 Artist Katie West, left, and Kathy Jones, local postmaster, pose in front of a mural West created for the post office in Ava. The mural is on the wall behind the customer service area.

There is a new look at the local post office, as a mural is now displayed on the wall behind the stamp-buying counter area.  The mural showcases a work of art entitled, The Freedom Wall, and the patriotic display was installed on Thursday, Feb. 27, by local artist Katie West, and Ava Postmaster Kathy Jones.

Kathy, who has served as postmaster since August 2019, had the idea to update and freshen-up the look at  the local facility, and after meeting with local artist, Katie West, the idea of The Freedom Wall was born.

The wall depicts a free running horse, and a message alongside that expresses a heartfelt message of thanks and appreciation to America’s military, and all branches of service.   Included in the display are badges from City of Ava’s Police Department; Ava’s Volunteer Fire Department; Douglas County Sheriff’s Department; Missouri State Highway Patrol; United States Postal Inspection Service; and Post Office Inspector General.

The photo display was donated by Walmart, with direction from store manager Noel Dye, who also serves as West Ward Alderman for the City of Ava and Mayor Burrely Loftin.

Artist Katie West was chosen for the 12-foot long mural as she is  known for her patriotic expressions of art, as well as a sincere love for America.  In addition to the work at the Ava Post Office, Katie’s artistic talents are also found on display at the Douglas County Veterans Memorial Association building where she has a granite engraving of the American flag and an American eagle. Her work is also found at the veterans memorial site at the City Park.