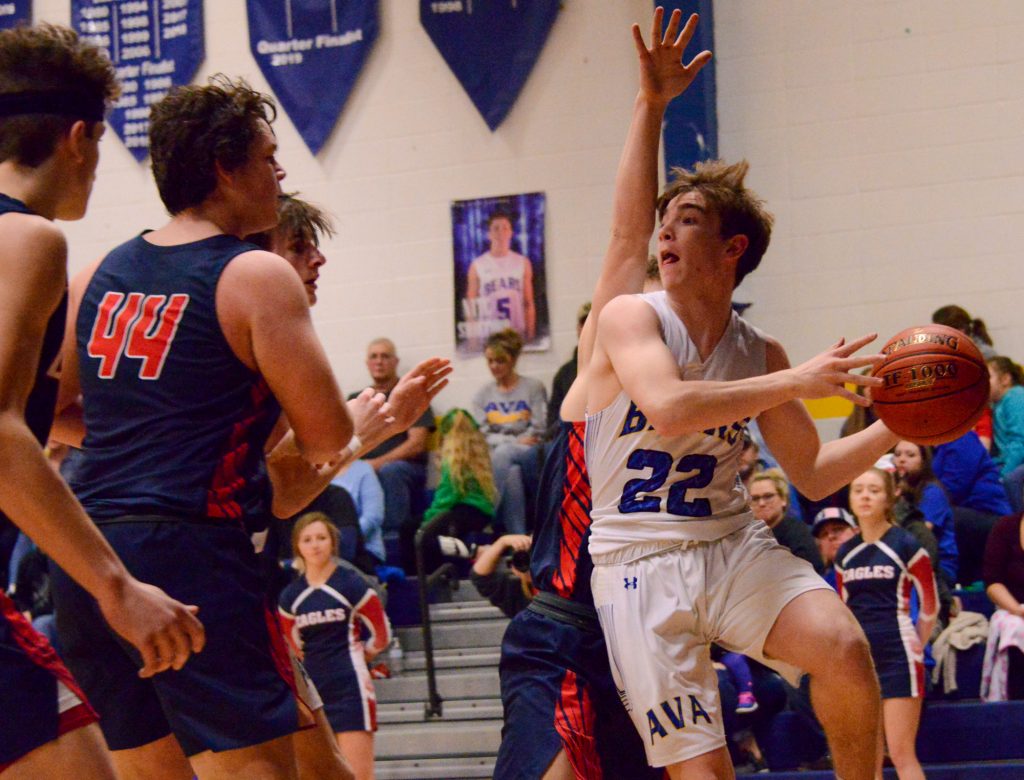 Ava High School's Blayne Mendel (22) looks for an open teammate after his options on the baseline are exhausted during the final regular season game against Liberty on Friday, February 21, 2020, in Ava, Missouri. (Jason Hoekema/Herald)

Borrowing the colloquial phrase “Don’t count your eggs before they hatch,” fit well with the Ava Bears’, 58-55, loss against the Liberty-Mountain View Eagles this past Friday.

One could look back to February 1st when the Bears topped the Eagles, 53-49, at the Mountain Grove tournament and say, “we can do this.”

Then one could look at the five-win Mountain Grove Panthers toppling the Eagles, 74-66, on the 14th and come to the conclusion of Ava going 7-0 in the South Central Association Conference.

Even after three quarters of play in the final regular-season game, it was easy for fans to think undefeated conference champs was the title Ava was keeping at home.

As do many first quarter, teams were testing the waters against their opponent. These two school had met before, have film on each other, and both came prepared.

With more than two minutes having elapsed, Nate Swofford finally broke the ice with a shot from outside for three. Right after that Andrew Dalton picked up six points with an early and-one from Liberty’s Zeb Cornman.

The two teams remained in close proximity of each other on the board. After the first eight minutes had gone, Ava came out on top at a narrow, 13-10, lead. Liberty’s Kaden Daniels showed up early earning seven of those first quarter points.

The waters were a bit murky, so to speak. In the first quarter alone the two teams had committed a total of ten fouls; Ava getting six of them and tagging Blake King, Jacob Gillies, and Blayne Mendel with two apiece. 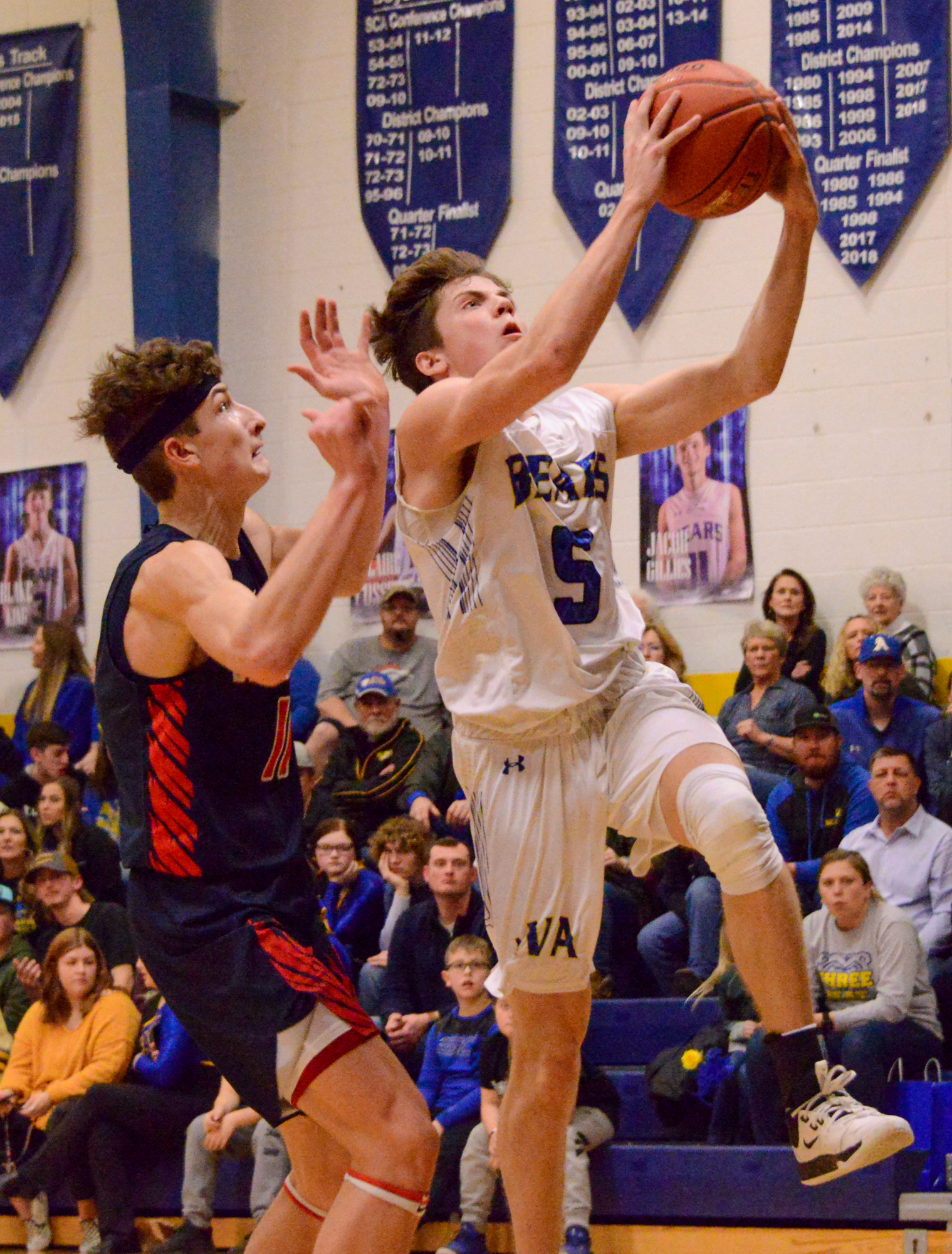 The first quarter was much like the climb to the top of the initial fall on any rollercoaster out there. Slow, steady and building up anticipation – or anxiety.

In the second quarter the first plunge came when Ava went up 20-14 on the Eagles with a three from Quinton Donley. Kaden Bruce got a look outside and nailed another for the Bears putting them into the second with a 7-2 sprint out the door.

Swofford and Gillies both managed to plant and take charges from Deion Lee and Zach Stretch in the first half, stopping the Eagles’ offense.

Without a lot of scoring from the top end of the numerical roster things fell to Andrew Dalton who led the Bears with 24 total points.

Fouls were coming out and beating the Bears at their own game. Ava committed an additional three fouls, giving up the bonus with 5:26 left in the first half followed by Liberty with 3:21 left.

The first of several iffy calls was made with a goal tending penalty taken out on Gillies, who was at least a full second behind Cornman and slapped the backboard on his way through. The call turned up two points to the Eagles who tied the second at 15 each.

Back at square one, the Eagles and Bears hit the locker rooms with Ava holding on to the same, narrow lead at 28-25.

At the half Dalton was carrying the team with 13 points followed by Kaden Bruce with five. Fouls only cost the Bears five points in the first half while they picked up seven at the stripe where the Bears shot an overall .769.

“I don’t thinks we started well,” said coach Damon Seiger. “We had a long second quarter and then we found a rhythm and ended the third quarter strong.”

Bugs Bunny must have been in the locker room making everyone drink water labeled “secret stuff” like in the movie, “Space Jam.”

Out of the chute the Bears were on fire.

Blake King started the second half with an improbable bucket through a throng of Eagle defenders. Swofford stepped up with eight points, starting with a three-point shot which put the Bears up by seven. Later, thanks to an assist from Dalton, he found the bucket inside.

Gillies and Blayne Mendel both hit the bucket from inside the lane, Mendel doing it with a steal and bucket.

Meanwhile Dalton was trying to drive the lane and crash past – or through – defenders for his first two buckets. His final two of the third quarter put the Bears up by 10 points.

Coming full circle back to Swofford, the senior let one loose from the wing and hit the net not a second before the horn sounded the end of the third. The Bears had come back out and owned the Eagles, 22-14, earning them an 11-point lead going into the fourth quarter.

The Eagles were all but done with the board reading 50-39 after three quarters.

Relatively quiet and well-guarded in the first half, Zach Stretch had scored only five points on the Ava defense.

Just as the Bears had, he surged in the second half scoring 12 in the third quarter literally carrying the team into the final eight minutes of the game.

“He is a nice player,” said Seiger. He rose up and did his thing. We knew about him from the first time we played (Liberty) and we knew during the course of scouting that he is one of their main guys. At any given time, he can go off. He is a 6’3” matchup nightmare because he can go inside but also work outside. He did a lot of good things tonight.”

He hit the bucket twice, inside and picked up two free throws from Dalton who came close to fouling-out in the fourth.

Then things fell flat, like returning to the station on a rollercoaster.

Coming off the big third quarter with an 11-point lead, the Bears had one task ahead of them. Defend better than they scored to keep the lead alive.

16 unanswered points later the Bears’ nightmare was unfolding before their eyes as the game was swayed by their use of hands – not feet – on the court.

“We played a really good third quarter,” said Seiger. “Then we kind of forgot about the fourth. Almost like we thought we had won, but Liberty didn’t think so.”

The Eagles opened up the final eight minutes on a free throw spree of six points to whittle away the Bears’ lead to five.

Cornman added to the comeback with a bucket before Jaris Acklin sunk a three from the top of the key to tie the game at 50.

Unfortunately, the Bears were only 11-points into the surge of 16 from the Eagles. Kaden Daniels hit another from outside while Dalton started fouling in frustration, giving up six points in the second half.

“We worked against ourselves at the start of the fourth quarter,” said Seiger. “(We) did some uncharacteristic things and then (we) found ourselves playing catchup. It was one of those nights for us.”

Finally, Dalton was able to break through, pulling a defensive foul from Cornman, uncharacteristically hitting just one of the shots after keeping up 80-percent from the line this season.

Minutes burned down to seconds as the Eagles feasted on 12 points courtesy of the Ava defense. Liberty toed the line shooting 86-percent in the second half to keep their narrow lead at the line, even when Dalton brought the Bears back within two.

“We got touches, I thought we got good looks,” said Seiger. “I don’t think we lucky. We were not as unselfish as we could have been, and maybe that changes things. All the same, we will go back to the drawing board. This is not the end of our season.”

Mathematically, the 19-5 fourth quarter was just enough for the Eagles to take home the win while breaking Ava’s eight-win streak since February 1st.

The Bears had fallen short of their 7-0 SCA goal, but still walked away with an outright dominance of the conference.

“This isn’t a game we wanted to drop by any means,” said Seiger. We are also 20-5, we won our conference. Didn’t go a perfect seven, and sometimes that is part of it.”

The season did not start the way Seiger would have liked. Ava was on a historic march to Mizzou to compete in the State Championship game. As in most smaller schools, teams carry from one season to the next and the football team had sat out against Gainesville where junior players like Quinton Donley came up clutch to start the Bears on the right note.

“It’s a night and day difference from where we started this year,” said Seiger. “I put it up on the board earlier today, that I felt like we started strong and stayed strong. We went further in the Blue and Gold and gave Class 5 teams all they wanted. Then obviously the run we’ve had through January and mid-February. I feel like we’ve done just that, we stayed strong. Now it’s a matter of finishing.

The basketball team graduates five seniors this year, and coach Seiger could not be happier about the way they have come in and led the team in his first year of coaching in Ava.

“They’re amazing young men, said Seiger. “The relationships I’ve been able to build with them, and not just as a coach. I’ll be indebted to them for a lifetime. They have given me the opportunity to come in here and change up some things and gave me the chance to do what we needed to, to get where we’ve been. It starts with senior leadership and this group of five has been as good as anyone could be. “

This season was a record-maker. The Bears now join just five Ava squads who have had the pleasure of winning the conference. The last SCA title was earned in 2012 under then-coach Nathan Houk.

“I think (the seniors’) legacy will speak for itself,” said Seiger. “This is the first time in years that we’ve gone to the 20-win mark. The same can be said for tournament wins and for the conference. And I don’t think we are done yet. We are going to continue pushing through this thing, see how many wins we can rack up and see if we can add a district title to it all.”