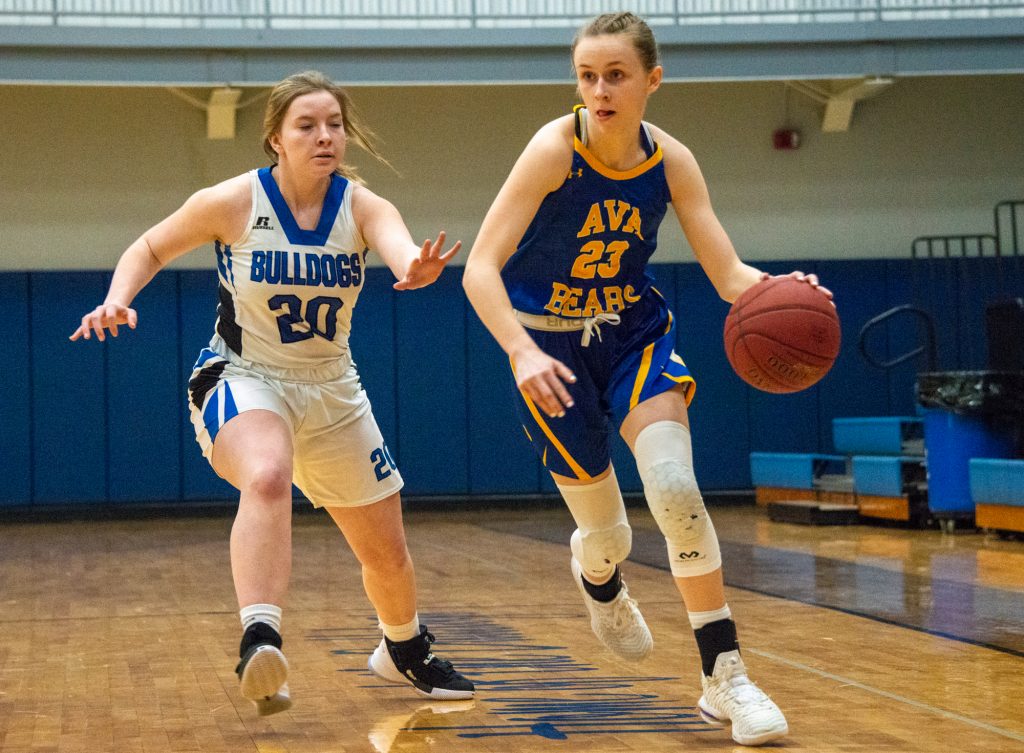 CABOOL – In the final week of regular season basketball the Lady Bears continue with a full schedule. Monday they competed in the dog house at Cabool and dropped the game, 56-46.

The Lady Bears took the first quarter, 12-7, in a start where Sara Mendel came up big for Ava in the post with six points. Single buckets from Claire Fossett, Olivia Gastineau, and Hannah Evans all helped Ava close the first eight minutes with a sprint of six points.

The second started out well for Ava, who hit the court for six unanswered points on an 8-3 run. Cutoff at 20 points, all Hailey (Shannon) broke loose.

The Lady Bulldogs’ resurgence started with fouls drawn from the Ava defense totaling five points and tagging Fossett twice and both of the Gastineau sisters.

“We had Shannon guarded really well,” said coach Nathan Houk. “She shot it over a couple of people, several of us. That one before the half, it was a 35-foot shot. It just sometimes happens.”

In spite of the effort from Olivia with eight points and a successful charge call on Cabool, both Fossett and Evans were having difficulties getting the ball into and up to the bucket from the post.

The Lady Bears froze as Shannon hit her first from Broadway and a second to cap-off an 11-point run tying the game at 20. Cabool took the go ahead on a third shot from Shannon but Olivia tied things back up at 23 points.

The comeback was enough to light up the Cabool fanbase and get the team going on the court.

In the final seconds, Shannon took a shot from beyond the top of the key.

When the dust settled, Shannon had hit nothing but net at the horn to give Cabool the final –impactful – statement.

The 23-14 second quarter surge took Cabool up and past the Lady Bears who now trailed at the half, 30-26. 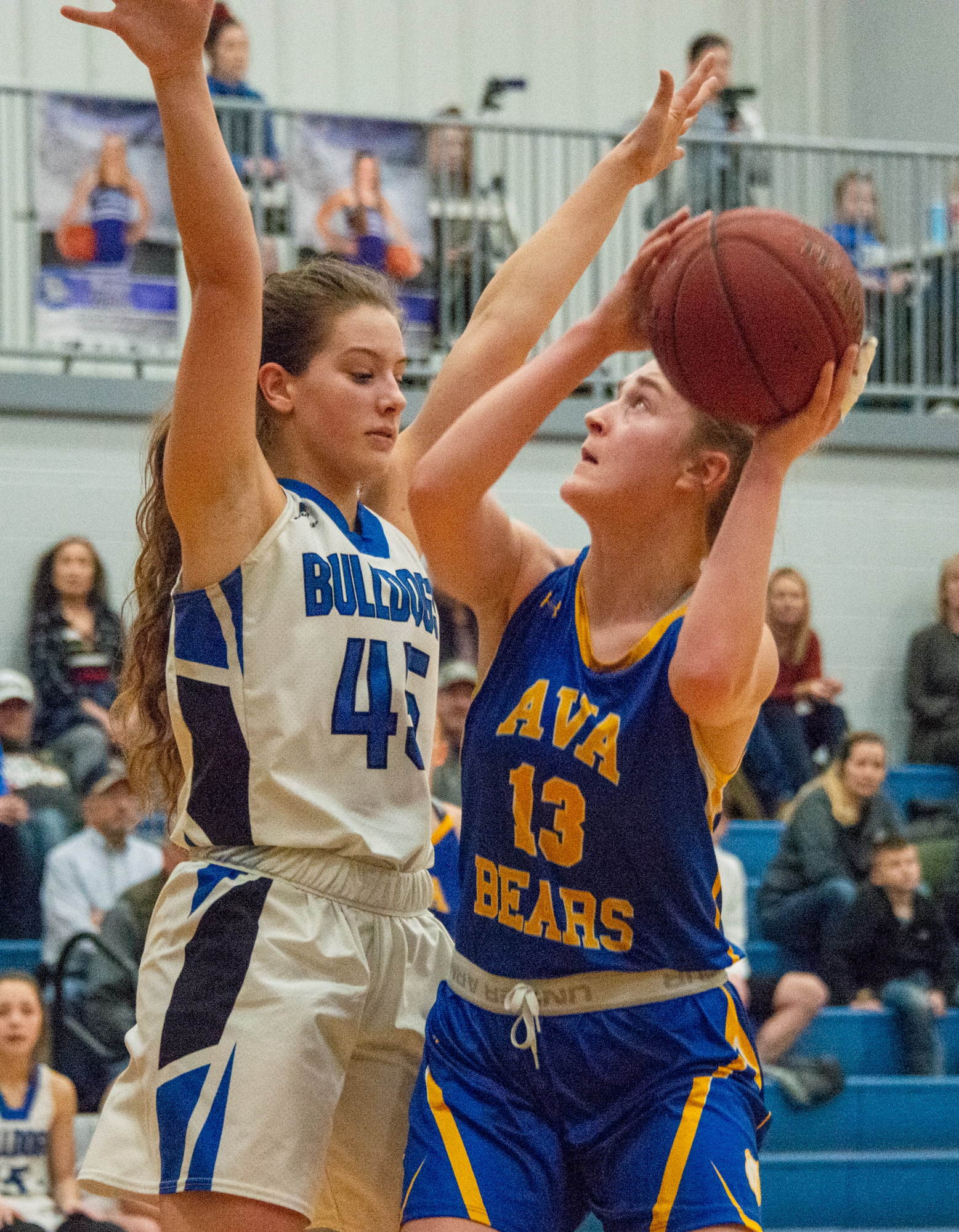 Four points down into the third quarter is not much on paper. Two stops with buckets on the other end and the gap is closed.

Unfortunately, the Lady Bears couldn’t get back in the game, scoring just 8 points in the third.

Emaly Keyes was able to get a look from the arc and hit the net bringing Ava within three points with 3:38 left.

Meanwhile the game was put on the shoulders of Hannah Evans. With her best efforts on the court, she scored five with one bucket and three more from fouls.

Her three free throws marked the end of the third, and even then, the Lady Bears saw the point gap open to six with Cabool leading, 43-34.

Another problem arose and to put more on the Lady Bears’ plate. Whether the calls made were good, or not, she tacked-on two more fouls which brought her back to the bench with four defensive fouls early in the third.

Fossett caught her third whistle of the game, as well.

Late to the Party

Just like the game in Norwood, the Lady Bears found some energy and spring in their step in the fourth quarter to bring them back within striking distance of the Lady Bulldogs. With what appeared to be the comeback quarter, the Lady Bears hit the maple and sunk the ball for 12 unanswered points.

Fossett found herself in a spot and chipped-in the ball to answer a three-point shot taken by Josie Atkins. Immediately after that Oliva got a look on the arc and hit the net for three more as the Ava fan base erupted on the bleachers.

A slight hiccup after Hannah Evans was given a blocking foul – with uncertainty displayed by the official – which started her foul-count.

The call made little difference as Ava kept the stops coming and got the ball to Evans who abruptly went up to draw the defensive foul from Katelynn Ellison on the shot.

She sunk the two, then Ava picked up another stop where Fossett managed to get the offensive rebound and put it in.

The bucket brought Ava within three points of knotting the game with 5:55 left in regulation.

Keyes found herself looking at the bucket from the far wing and sent it.

Swish and the game was suddenly tied at 46 points. 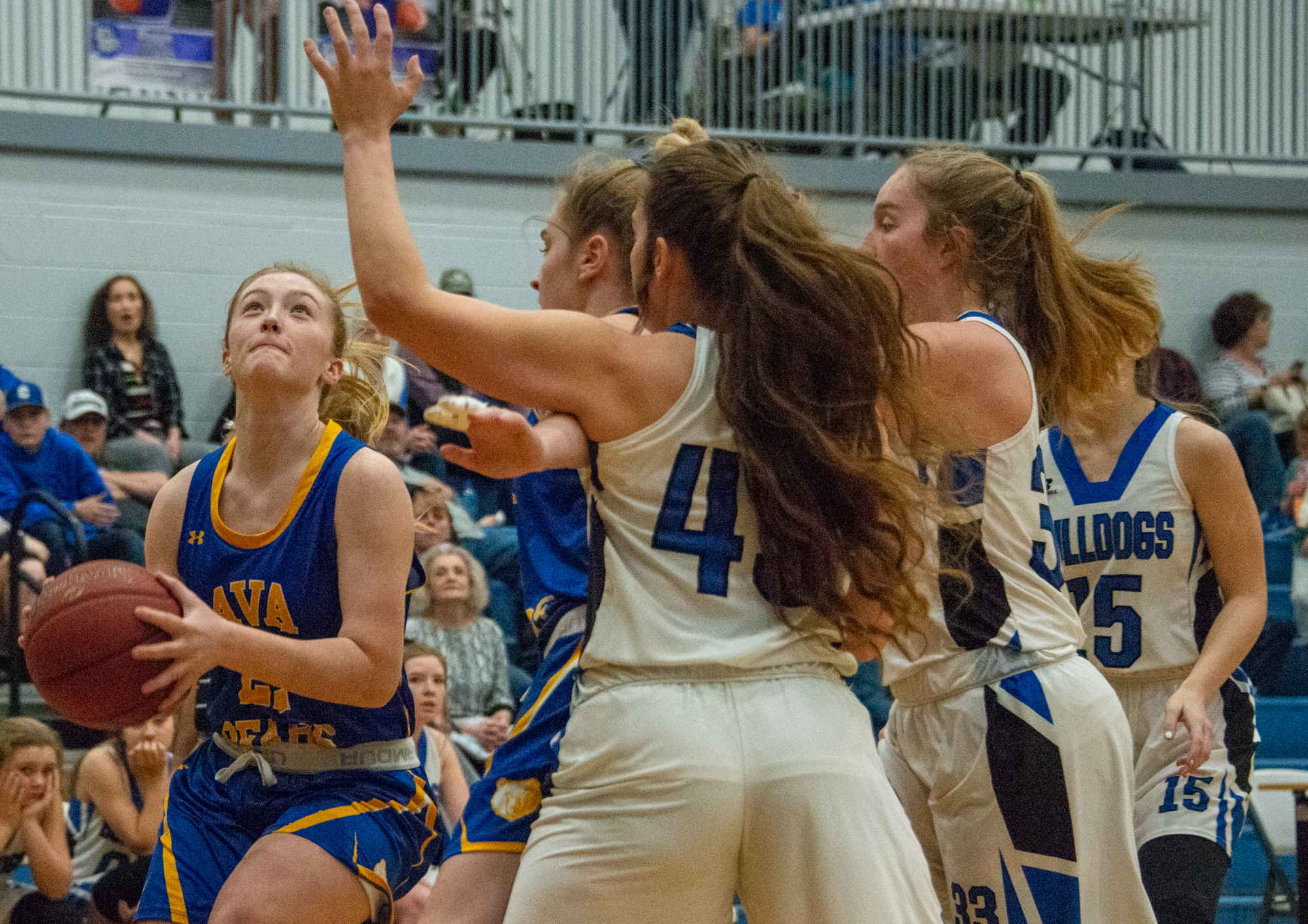 Almost in an instant the Lady Bears had stopped with 12 unanswered points. Their score didn’t budge in the final 4:58 left in the game.

Instead the Lady Bulldogs went on a spree for ten points to bag the win, 56-46.

“We didn’t execute well enough when we fought back to get the tie,” said coach Houk. “We tied it up and they hit a really long three that got the lead and then we never got it back.”

The Lady Bears’ run was stopped by a long three-point shot from none other than Shannon who hit the net five times from outside on Monday. Toss in a few free throws plus a bucket, and she led the Bulldogs with 20 points.

Then Ava was racking-up the foul count, totaling 12 in the second half. The Lady Bears gave up the double bonus with three minutes left and it cost them five points.

The fifth and final point of the game – because of a missed bucket at the buzzer – came from Shannon once again at the line.

Thursday is Senior Night for the girls’ basketball team. A ceremony will be held before the start of the varsity game as Ava hosts Liberty-Mountain View.

This year’s seniors are:

“(Liberty is) a big, physical team,” said coach Houk. “We’re going to have to rebound and play really well, control their shooters. (We have to) do a better job than we did tonight.”