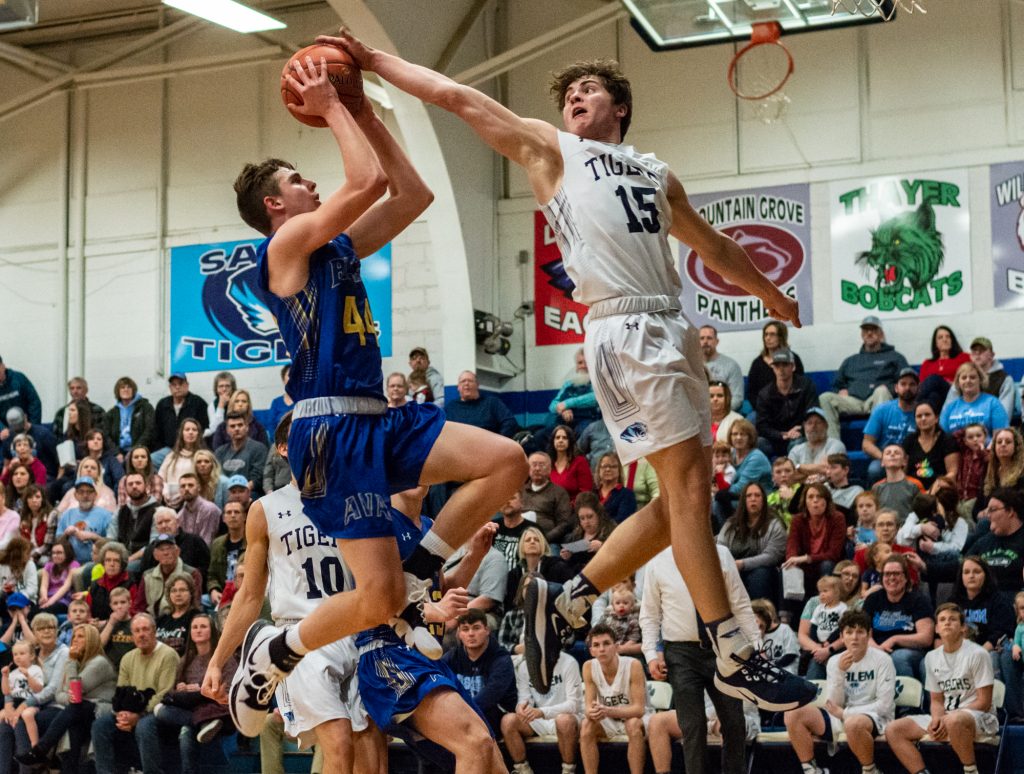 SALEM – The Bears keep going, passing teams in the South Central Association Conference one at a time. So far, the Bears have taken five opponents down and have two left to claim the crown.

Recently, except for the game against Mansfield, the Bears have been struggling out of the gate. They dropped the first quarter against Houston, 11-9. Squeezed by Thayer in the chute, 16-15. Each have been slow starts for Ava.

“You get to this point in the season and it becomes a grind,” said Coach Damon Seiger. “Yes, we are playing for something each and every night, but I think having played as many games as we have – and our football guys never got a break transitioning in – I feel like we’ve looked a little tired the past couple nights.”

Now the Bears were slow to get going against Salem. Eventually they gained traction and went on to win the first quarter, 10-6, thanks largely to a sprint of six to end the quarter.

Andrew Dalton was inside shooting for eight points in the first. An offensive rebound by Blake King tacked on the other two.

Both were getting looks and touches, sprinting, hopping, and leaping through defenders with Dalton making an improbable bucket at the end of the first.

On defense Nate Swofford was having more luck posting and successfully taking the charge when compared to the game against Thayer.

The first came when he was able to catch and cutoff Silas Wulff to help deflate the Salem offense with a call most expect to go the other way as a defensive blocking foul.

“We’re going to get a couple of days off,” said Seiger. “We are going to get ourselves prepped and ready for Monday because we got another big week, again. At this point of the season it’s (about) getting our legs back underneath us, get our mojo back. We haven’t started the last couple of games well, but fortunately we’ve got a way to finish games.” 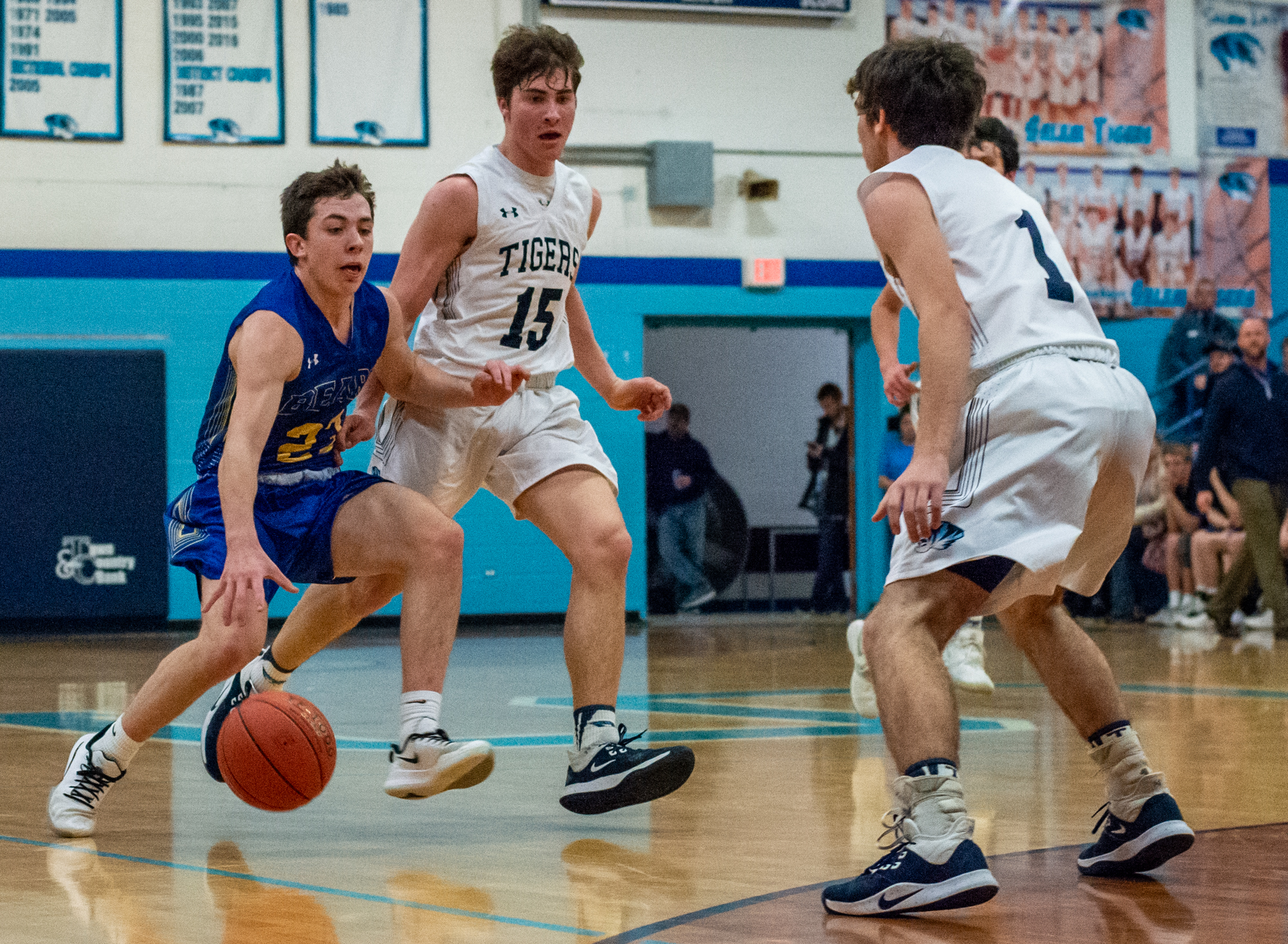 Ava High School sophomore Kaden Bruce (23) moves the ball across the court during and SCA Conference game against the Salem Tigers on Friday, February 14, 2020, in Salem, Missouri. (Jason Hoekema/Herald)

Into the second the Bears extended the lead, going into the break at 25-17, climbing from a four- to a seven-point lead.

The 15-11 quarter started with a bucket inside by Dalton, who went on to draw two fouls for four points. The first foul from Garrett Connell put the Bears up by ten on Dalton’s second shot from the stripe.

Blake King came up with a bucket but Swofford put up three points on a costly foul drawn from Easton May for three points.

The Bears’ offense was still having some trouble cutting through the Tigers, having to reset the scheme and try finding the gap to make the pass to Dalton or King in the post for quick buckets.

At the half Dalton had shot for 18 points, the highest number in the first half this season. Through the entire game he shot for a total of 29 points, a season high and just shy of one record of 32 points set by Pete Leonard in the 2010-2011 season.

This brings Dalton up to 911 career points with the Bears.

After the half, however, the score flipped on Ava with the Tigers taking the third quarter, 15-11. A mirrored score from the second quarter.

Salem’s Carter Chilton opened the second half with a three-point shot, one of four he hit on Friday.

The Bears had no choice but to hit the lane and try for buckets and drawing fouls on the shot. In the first half, the Tigers had no answer for Dalton.

In the third quarter, however, he was limited to just four points. One bucket on the inbound and a foul drawn from Braiden Carmack.

Blake King had started to come alive in the third, shooting for ten points in the second half. His second bucket inside was just as improbable as Dalton’s in the first half.

With a swat at the ball from Garrett Connell, King’s shot still hit both sides of the rim before sinking into the net.

The Tigers were led in the third quarter by Carter Chilton with ten points. Nine came from shots outside as threes chipped away at the Ava lead, shot by shot.

The Bears weren’t able to hit anything from outside Friday. Quinton Donley was quickly identified as a shooter, unable to pull the trigger for a surge from Broadway.

Instead, Salem had seven three-point shots by the end of the game. That come out to 21 points, and when timed correctly they can move the momentum from one side of the court to the other.

Up by just four points at the end of three, the board reading 36-32 at the horn, the Bears needed to get back to the brand of play they have relied on for this year’s success. 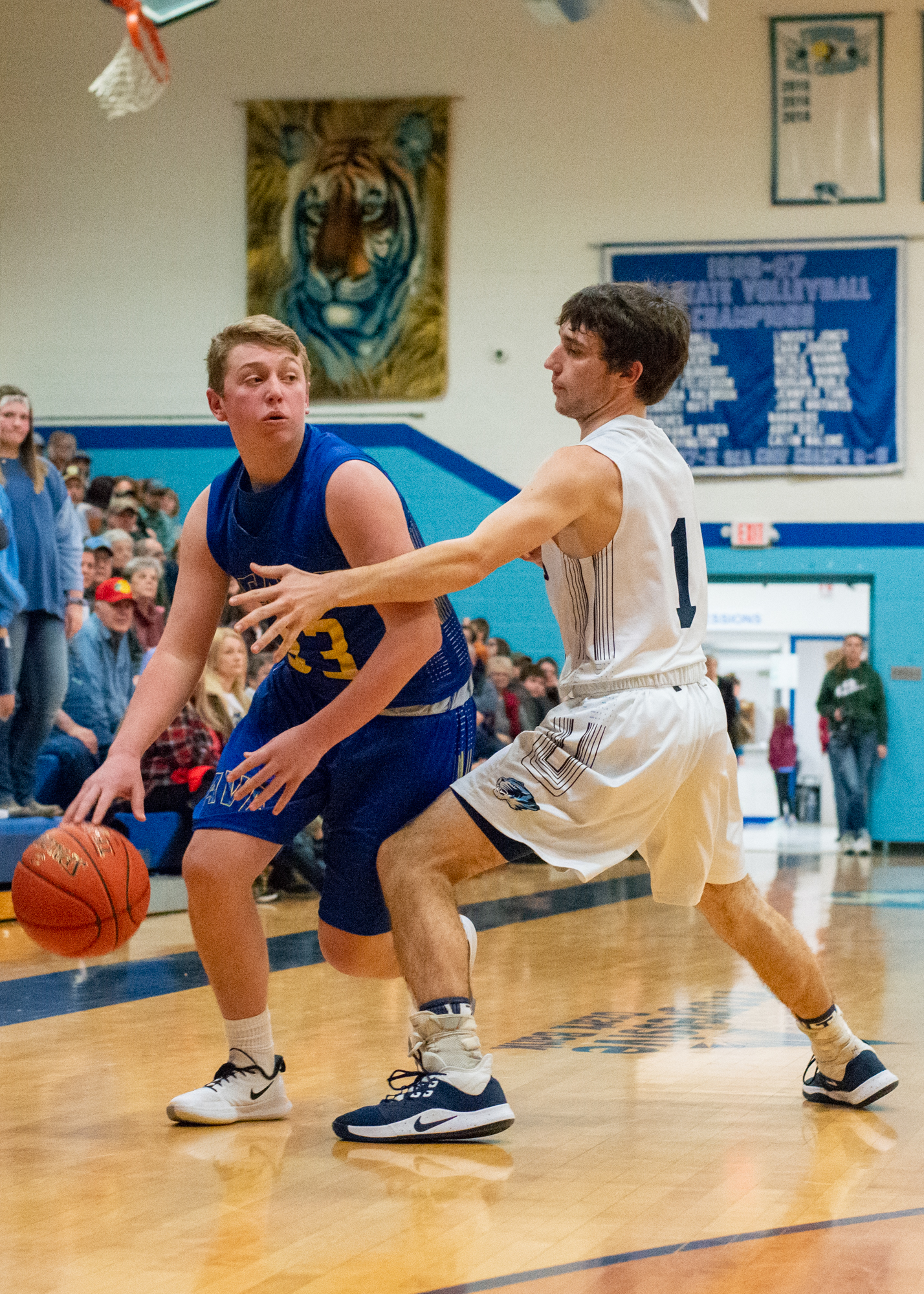 Ava High School junior Quinton Donley (33) keeps the ball in motion as the Bear offense finds a weakness in the Salem defense during an SCA Conference game Friday, February 14, 2020, in Salem Missouri.

The gloves came off in the fourth, Ava winning the quarter, 23-13, with multiple points coming from King, Swofford, Blayne Mendel and Dalton.

King scored six, one bucket uncontested on a cross-court pass leaving him with one defender on the other end.

Swofford scored four, but also successfully took a second charge by Reese Dodson to get the stop on the Tigers’ offense.

Dalton played his heart out in the fourth making plays and shots for seven points. It was his actions on defense which stood out. With the ball inside the Ava defense he successfully swatted the ball out of the shooter’s hands. Twice, and three seconds apart.

Looking at the final numbers, Blayne Mendel could be overlooked. But the highlight of the game was a late-game alley-oop to an already elevated Swofford who tapped the ball in for two points.

At the end of 36 minutes the Bears had kept and extended the lead beating the Tigers, 59-45, with a destructive run of nine in the fourth.

The Bears continue their march through the SCA, much like the school’s football team did this past fall. One by one, the SCA fell to them and are now falling to the Bears playing on the maple. They end this week with Senior Night against Liberty–Mountain View.

“We’re not going to overlook the two (SCA games) we’ve got in front of us right now,” said Seiger. “We know liberty can play, we’ve played them once already this year. Cabool is an SCA matchup just like (Salem). You better bring your hard hat and lunch pail and be ready to go to work, because they will. They can pop you in the mouth if you’re not ready for them. We will take care of them, one (game) at a time.”