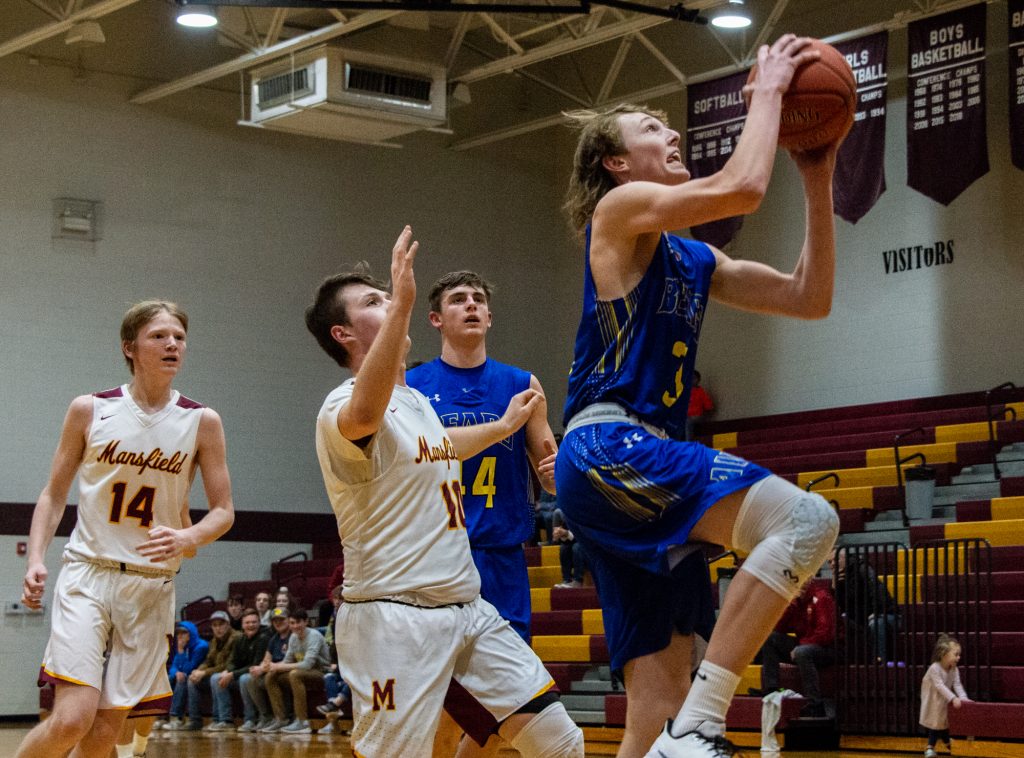 Secondly, this year’s team has met the 17-win highs set in 1992 by Coach Jesse Blevins and in 1955 by Coach Don Sallee. In those numbers, even if Ava dropped the rest of the regular season, Coach Damon Seiger and the squad will knock a handful of percentage record in the books.

Third and still talking hypotheticals, if this team finished the season at 21-4 –– winning the rest of the regular season games –– they would have an .840 winning percentage setting them in third and knocking the .830 percentage set by Coach Hurse Smith in 1947.

Fourth, the Bears’ work this season has put them in the Number Two seed at the District Tournament. The Bears’ first opponent will be the Dixon Bulldogs, with whom Ava has no recent history to speak of.

Dixon is 10-9 as of last Thursday, however, there is still A LOT of basketball left in the regular season. We will just have to wait and see what this special group does before the postseason.

The Mansfield Lions are in a rebuilding stage. Since 2007 these two schools have traded winning –and losing – streaks. The latest was an eight-loss slump for the Bears.

Every program hits these hurdles time and again, something to keep in mind if you are bragging about the Bears.

The Bears opened with a six-point rush started by an inbound pass for a bucket by Jacob Gillies before Mansfield’s Hesston Gray drew back-to-back defensive fouls from Ava senior, Blake King. Gray hit the net for three then a bucket from Arly Miller ended the first with five points for the Lions.

On the other end of the court the Bears came out on top thanks to a 10-2 run sparked by a bucket and-one from Andrew Dalton, who scored 15 points last Thursday.

Blayne Mendel followed-up with a shot from outside and also drew a foul from Miller towards the end of the quarter.

This put Mendel up as the second-highest scorer in the first with five points. Blake King was able to get inside for six before the first eight minutes elapsed.

With the 17-5 first quarter, there was no looking back. Part of that success was keeping Gray in check. The 6’4” senior can work the post, the perimeter, the paint and everything in between. He drew six trips to the line but shot six of 11 from the stripe all while being held to just three buckets and a total of 12 points.

“We knew this was going to be a game where we needed to get both inside and take advantage of opportunities,” said Coach Damon Seiger. “I thought we did a good job with that.” 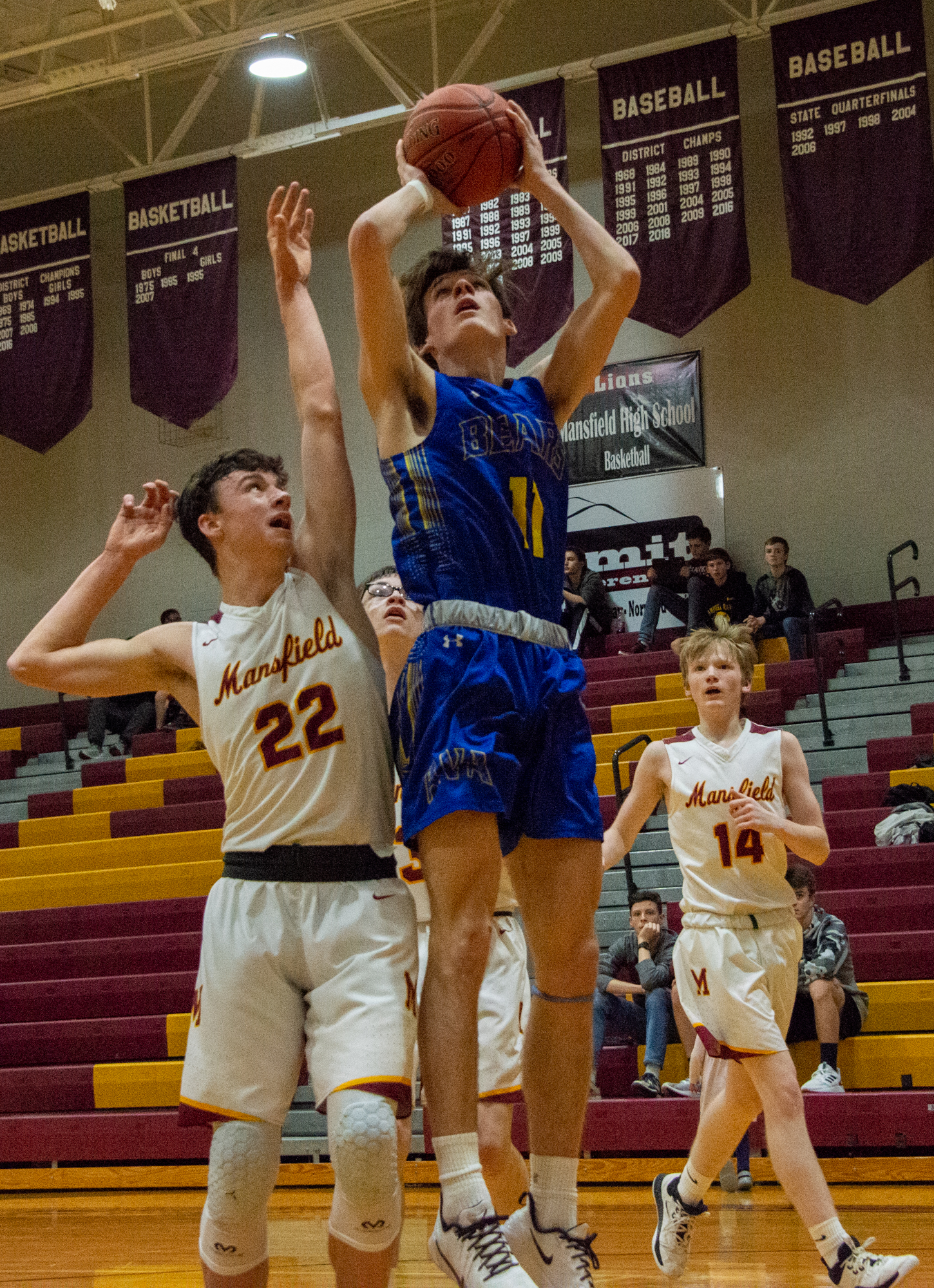 Ava High School senior Jacob Gillies (11) attempts to chip-in the ball from the paint during a non-conference, non-district game against Mansfield on Thursday, February 13, 2020. (Jason Hoekema/Herald)

With Mansfield asleep at the wheel in the first eight minutes, the team came alive in the 11-10 second quarter where the Bears relied on Gillies in the post for six points.

Dalton chimed-in with a shot from Broadway and sophomore Blayne Mendel hit a long two-pointer to cap-off the first half with a score of 28-15.

Turnovers and boxing-out were the gems of the evening. Mansfield has seven varsity players whom tower at six-foot or higher. Heston was inside the paint for several defensive rebounds and was on the spot for a couple of jump balls after Ava’s shot attempts missed.

“(Heston) is a man out there at six-foot and 220 pounds,” said Seiger. He is a put together young man and he is not just a post player. He is a guy that can put points up on the floor and handle from the perimeter. We put some emphasis on him, but didn’t completely sell out (to stop him).”

Out of the locker room the Bears surged for a 20-15 third quarter led by King with seven points. Quinton Donley picked up some time on the maple and was able to hit a long three from near the top of the arc before the quarter was up.

Kaden Bruce had an All-Star moment working the point when he “broke” a couple of ankles while the Bears finished their transition to offense.

Out of the chute Mansfield was outscored 11-5 as the Bears pulled away with as many as 20 points over the Lions.

The Lion’s were able to return fire with threes from Chade Noble and Tom Emerick – who shot a total of 13 points and also won a rebound contest for a bucket in the third. Gray picked up the pace and shot for five points.

Meanwhile Chase Cartwright was flirting with foul trouble, picking up his fourth whistle on the floor.

Shoot with Your Legs

Shooting is a balance of stance, power and a follow through on the shot. Players like Quinton Donley and Caleb Johnson from 2019 are prime examples of long shooters. With the Salem Tigers next in line this past Friday, Coach Seiger needed to pull his starters if Ava wanted to have a good shot at topping the then 10-11 Tigers. After all, SCA games have a tendency to ignite teams thought to be dormant.

With that in mind, the fourth quarter went to the Lions, 15-8, as younger players picked up varsity minutes in the non-conference, non-district rivalry game on Highway 5.

“That was something that is always a challenge when you play back-to-back nights especially having the SCA match after this game,” said Seiger. “This was an important game, yes. But it isn’t a conference game, not a district game. That in itself helped determine what we were going to do. We thought if we can get an opportunity we would rest legs because we know the value tomorrow’s game has.”

Tom Emerick opened with a three-pointer, an answer to a bucket from Mendel with 5:32 left in regulation. The Bears only picked up three field goals, one of which came from Payton Evans who now has a total of 18 points while working on the varsity squad.

A challenged Dalton made it inside for two and the three-point play, topping his PG at 15 for the evening and 396 points this season.

The End is Near

Nearing the end of this season the Bears have scored 1,224 points consisting of 343 twos, 99 threes, and 232 successful free throws. Second to Dalton in total points is Blake King with 197 as of last Thursday followed by Nate Swofford with 170.

Quinton Donley leads the team in three-point shots, totaling 28 for 84 points. Right behind him is King with 25 and Swofford with 17.

From the stripe the Bears have shot a cumulative .690 from the stripe. Their season high is .846 against Conway at the beginning of the season.

Percentage wise, dropping totals, Payton Evans and Dylan King are perfect from the stripe followed by Dalton who has shot a .807 this season and Donley with a .750.