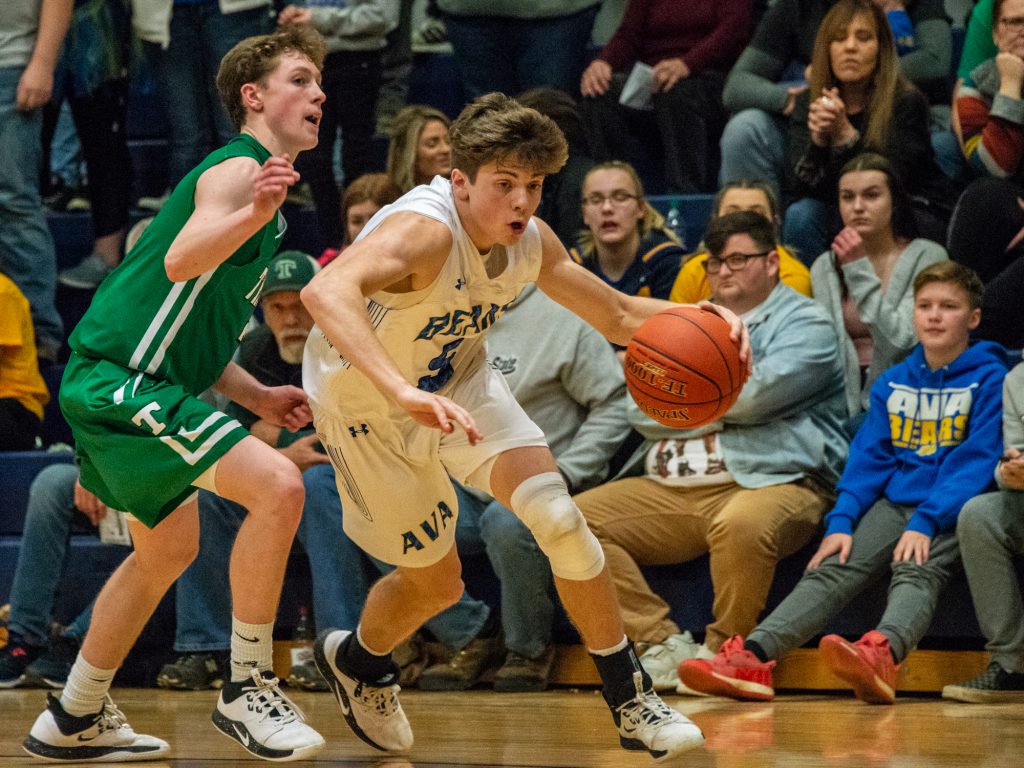 With Hoopcoming out of the way the Ava High School Bears looked at the task ahead of them. The Thayer Bobcats.

Ava hasn’t come out on top against the Bobcats since 2013 when they took to the road for a narrow, 48-44, victory. Since then the Bears have taken losses for six years against the SCA rival with nine points as the smallest scoring difference in the drought.

Quite the rival to book a competition with at home during the basketball-version of homecoming.

In a twist no one could have predicted until it actually happened, the Ava Bears broke away in the fourth quarter for a 64-51 win over the Bobcats. 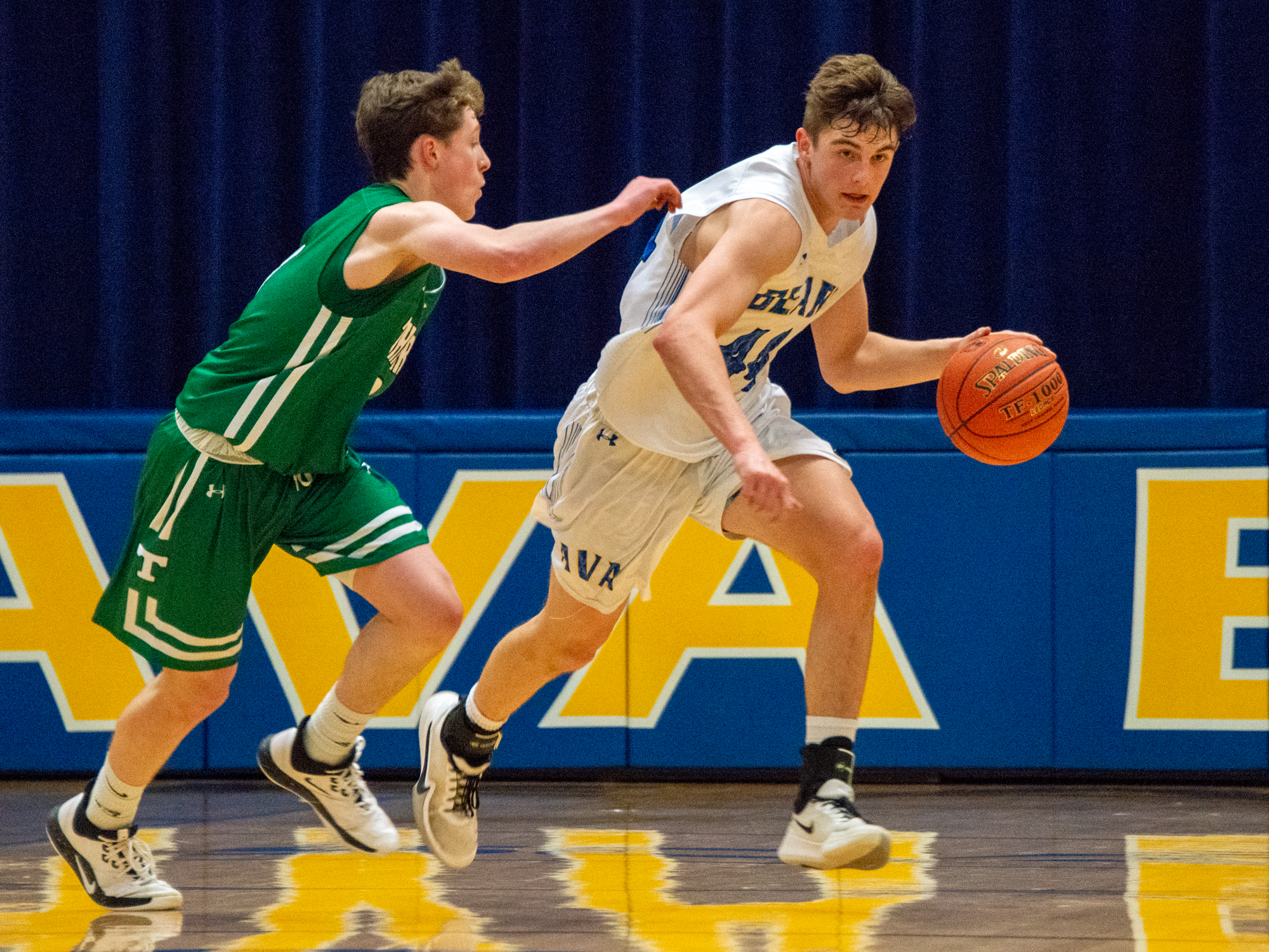 It took more than a minute for either school to put points on the board. The double zero was broken with a three-pointer from Andrew Dalton, who shot for 23 points Friday night.

The Bears took control early with a spring of six, another three put in by senior Blake King, before Thayer’s Jordan Andrews chimed in with a quick bucket.

Gaige Pitts added one from outside before the Bobcats recovered from a 9-5 lead by the Bears. With a quick run of six from two made by Logan Doss, Jayce Haven and Pitts the Bobcats tied the first knot of the game, the score at 11 each.

Dalton answered back with a bucket to put Ava up again, by two points. A back-and-forth ensued until Blake King drew a defensive foul from Haven on the three-point shot.

King toed the line for the first three free throws of the game and Ava’s last three points of the quarter. Later King gave up a foul to Andrews who took it to the line for two points.

Ava came out on top in the first, but by an uneasy single point. Thayer opened the next quarter with a shot from Doss before Ava took some control for a run of 10 – seven points from Dalton.

It appeared the game had found its breaking point in favor of the Bears. But the defense let their guard down as the Bobcats came back with nine unanswered to end the first half tied at 28.

The third quarter wasn’t any better for either fan base as it ended 41-40 for Thayer. Even with a back-to-back threes from senior Nate Swofford, the momentum of the game was not budging an inch as the Bears came up a point shy, 13-12.

Just as Thayer had done in the first half, the Bears knotted things back up and made the go ahead points for a substantial SCA win.

“Three big three’s we had there in the fourth quarter,” said coach Damon Seiger. “On the flip side of that, it’s about getting stops on the other end. We were able to get stops, get one-and-done’s on the other end. Any time you can do that with a few perimeter shots, all of a sudden you can see a knotted-up game go up nine or twelve. It got there pretty quickly.” 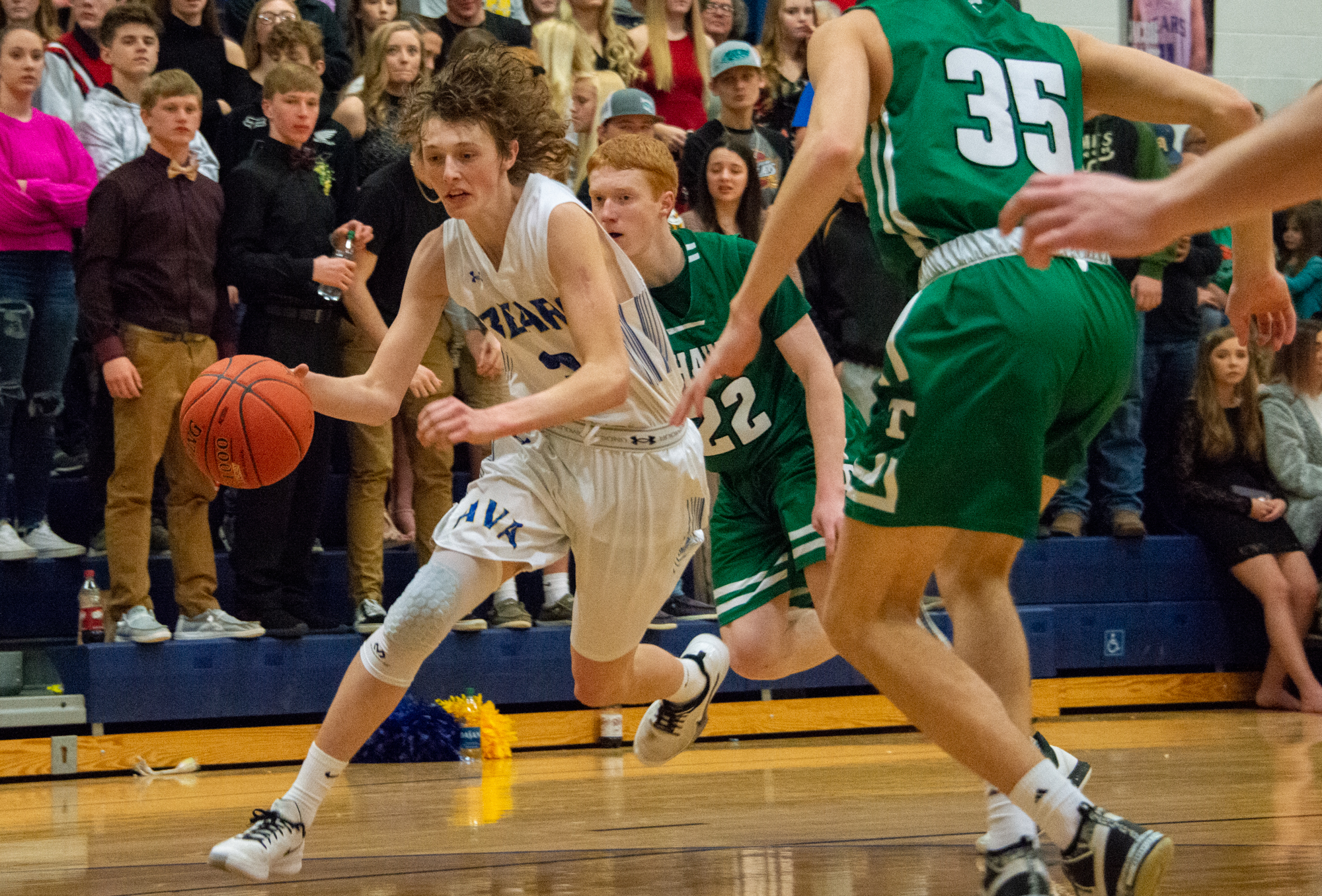 As coach Seiger describes the 5’11” junior, Quinton Donley is the guy on the court you don’t allow to be open anywhere near the arc. The athlete can receive a pass, set and shoot faster than most defenders can reach him once he knows he can make the shot.

Nate Swofford wasn’t able to make the game budge in Ava’s favor in the third, no fault of his own. The game played how the game played. However, Blake King hit one from Broadway to open the fourth and tie, yet another, knot in the game at 43 points.

Blayne Mendel was fouled and put in the free throw position. Mendel has only had 13 opportunities for eight points, shooting a .615 this season.

With the one-and-one looming over him he hit both buckets to put Ava up 45-41.

Thayer cut in and got a couple of stops, but eventually a 13-3 run sparked by back-to-back threes in less than 20 seconds led the Bears up and over.

Donley was the shooter, or gunslinger, with those buckets which turned the game’s momentum in favor of the Bears who went up 51-44 with 4:07 remaining in the game.

Well, they gave us a couple of big perimeter shots,” said Seiger. “Really, that’s where we saw the separation. That’s exactly what (Donley) does for us. He knows his role and fulfills that role very well for us. You know, when teams try to slow other people down, it’s just a matter of trying to find cues somewhere on the perimeter and let him do what he does.”

Right after that Nate Swofford drew a foul from Pitts for a point. Dalton was in the paint in a hurry after the shot and picked up the offensive rebound for another two.

Swofford took some hits for the team on Friday. The call kept going Thayer’s way, but on the final attempt when Swofford could have fouled-out, he was able to square up and picked up the offensive charge call as the Bears surged ahead.

“Charges are those are those are usually 50-50 calls,” said Seiger. “One coach is going to be happy and one coach is not. But a credit, that kid (Thayer has) is a hard kid to stay in front of. I thought (Swofford) did a valid job trying, he was just a step late. (Then they) got four fouls on Nate, but the fifth and final one that possibly could go against Nate… He finally squared him up, was able to get in front of him.”

Friday the Bears shot for ten three-pointers through four quarters. King nailed one in the first and fourth quarter and Swofford had his pair in the third as the Bears tried to shake off the Bobcats.

Dalton hit two, split by King’s bucket, in the first quarter and came up big in the second with another for a total of three.

However, the final blow cause Thayer to give way from six points in 20 seconds from Donley, who essentially tipped over the first domino for the Bobcats.

From there the Bears wrapped up the win with a 24-10 fourth quarter.

Means to an End

The Bears were outshot by four buckets inside, however, the ten three-point shots negated the eight from Thayer as the Bears put up the work for 50 points on field goals alone.

The other 14 points were made at the line. Thayer had a total of 22 fouls called on them through the game. The first was against King, who hit all three free throws given to him by Jayce Haven.

Dalton picked up a one-and-one in the second before the Bears had nothing from the line in the third. Gillies did pull the and-one, but left the frame open on a foul drawn from Logan Doss.

Before Thayer finally fell, the only free throws were made by Mendel who hit both on the one-and-one. From there the Bears kept extending their lead with an additional seven points from the Bobcats’ charity.

The 14 points drowned out the extra two-pointers along with the only four points made by Thayer on fouls. They shot at 50-percent while the Bears were hitting the net with an overall .778 from the line.

The local books indicate a 27-2 all-time win record set in 1972-1973 under the coaching of Truman Smith. Most seasons now don’t yield 29 games, so the Bears just need to keep working on breaking recent records and not worry about the decadent past.