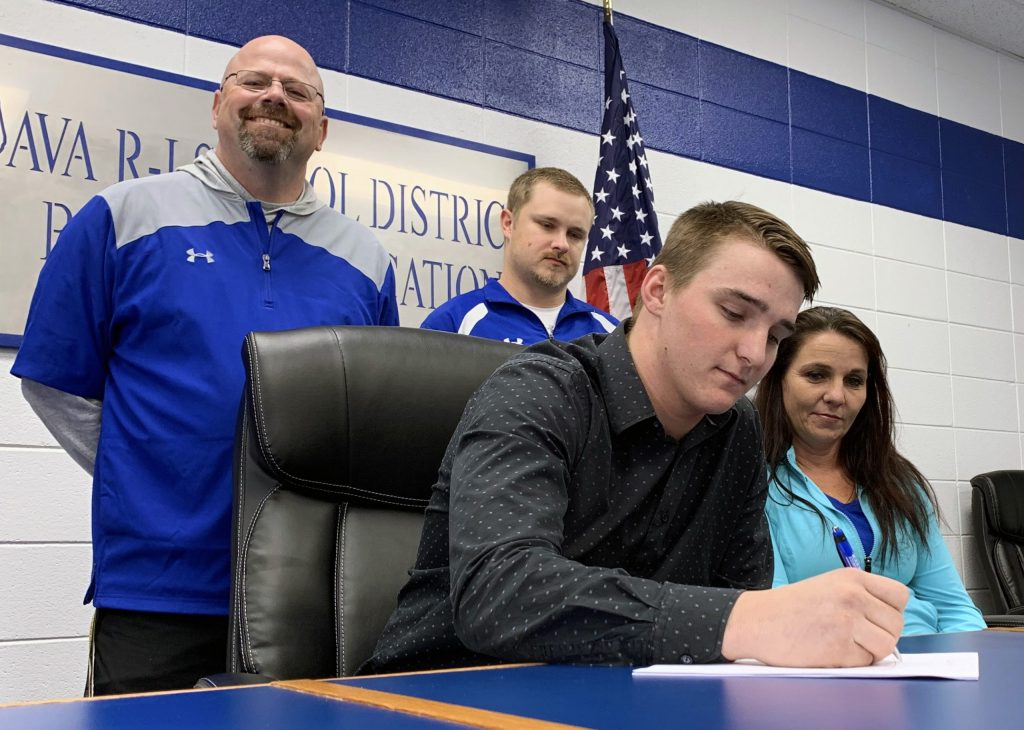 Ava High School senior Kayden Myers re-enacts the signing of his letter of intent to attend and compete for Southwest Baptist University during a ceremony held Friday, February 7, 2020, in the Ava R-I District boardroom. (Jason Hoekema/Herald)

He is a member of the historic football team who made Ava’s first state appearance. Ever.

“I’ve grown immensely as a human being and (learned) how to treat people,” said Kayden Myers after his signing ceremony.

“Here at Ava High School they do a lot of good stuff like that. So, I can’t really thank them enough. They they’ve been here for me good times and bad and they’ve helped me as much as they possibly could. That’s why I want to help kids when I grow up.”

Now he prepares to move on to the next chapter of his life where he goes from Bear to Bearcat at Southwest Baptist University in Bolivar, Missouri.

“Yeah, I’ve got to make grown-up decisions now,” said Myers. “This  as actually a hard decision between (SBU) and Evangel. I know I wanted to go somewhere Christ-based. I didn’t grow up in a church, like a lot of people have. I didn’t really have that luxury. So, I would like to get to know God while doing what I love and get to learn and go to school all in the same time.”

The school is a National Collegiate Athletic Association (NCAA) Division II school which is part of the Great Lakes Valley Conference (GLVC). Home to 17 different programs, Myers will start at square one as a freshman on a new roster.

“I want to go in there and compete,” said Myers. “You know, I want to compete in the classroom to do as best as I can in everything.”

The program he heads to was the 2016 GLV Conference Champions and competes with other NCAA Division II Schools like Drury University, University of Missouri–St. Louis, and the University of Illinois–Springfield.

The conference was established in 1978 and has 16 competing campuses throughout Missouri, Illinois, Indiana and Kentucky.

In his future Myers hopes to pass-it-on to the next generation with a return to secondary education and eventually counseling so he can help youth, passing on the lessons and love he has earned from the community.