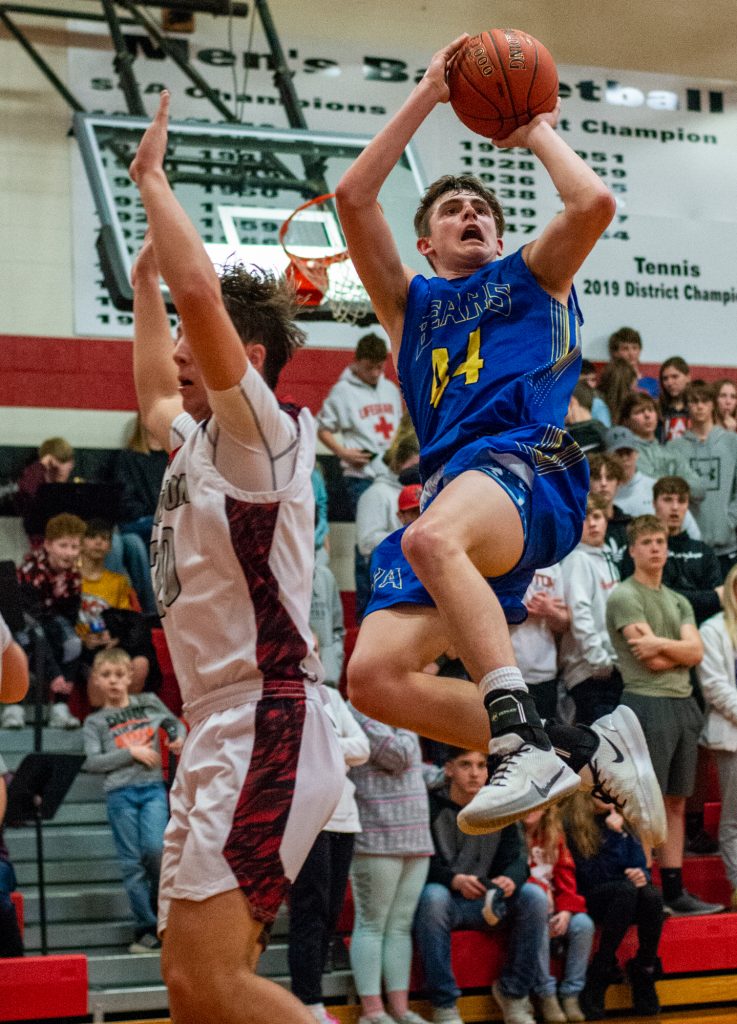 HOUSTON – If you made the trip through Cabool to see the Bears in action against SCA competitor, the Houston Tigers, you probably felt uneasy after the Bears start on the road.

Eventually the feelings of uncertainty were wiped clean once the Bears got their footing and left Houston behind at the horn, 48-31, continuing undefeated in the SCA and with a 16-4 overall record.

Touting the 4-0 notch on their belt the Bears have just three schools to defeat to win the conference outright.

However, being undefeated paints a bullseye on your back. Cabool (13-9), Salem (10-11), and especially Liberty-Mountain View (13-5) will be gunning for the Bears as most SCA games are generally more intense than regular season matchups.

Last year the Bears sent Salem and Cabool home with a loss, but Liberty served up an L for the Bears with a final score of 82-70.

This year the Eagles fell to Thayer while Ava squeaked by with the win. However, in the SCA, things can change in an instant.

Like a novice driver learning a stick, the Bears were stuck in first and grinding their way to second gear – and the second quarter.

The Tigers went up 6-0 early. Blake King was called for jumping for the tip off too soon, awarding Houston with the opening possession.

Korbyn Tune drew first blood with an inside bucket followed by one from Clayton Moore then a third from Tune.

The early goose egg wouldn’t have been as dire had the Bears picked up more rebounds and let go of fewer turnovers.

“I don’t even know if there’s any words for that,” said coach Damon Seiger. “Understand, any time you go on the road (in the) SCA, you’re going to get people’s best shot. Especially (with) the position we put ourselves in at this point. Being 16-4, 4-0 in the conference, every place we go we have a bullseye on our back. People trying to knock us off, trying to derail the train, sort to speak.”

It wasn’t until there was just 3:50 left in the first quarter that King nailed a shot from outside stopping the Houston offense’s run. Add two buckets from Dalton, one assisted by Zach Mendel, and the Bears were suddenly up, 7-6.

On the other end, Tune kept making his way down the lane for a total of six points in the first. Even with a tying bucket by Kaden Bruce at nine points each, Tune came back and had the final say in the first eight minutes of the game.

“It’s our job to come focused and ready to go,” said Seiger. I’m not so sure we were where we needed to be from the get-go. If you take their 6-0 run out of the equation (we beat them the rest of the game). I think that’s who we are. We just didn’t have the start that we wanted.”

Interesting fact from the first: zero fouls were called but Ava had missed plenty of opportunities.

“We settled in the first quarter,” said Seiger. “I want to say we took six or seven, three point attempts. I told the guys (if) you get three or four of those to go in it’s a different story. When you don’t have those go in, they are basically turnovers. (Houston gets) what they want out of it, the missed shot. On the other end they try to score. So, it’s just finding our balance. We’re an inside-out team and we know that  Sometimes it’s just you have to reiterate that to them.” 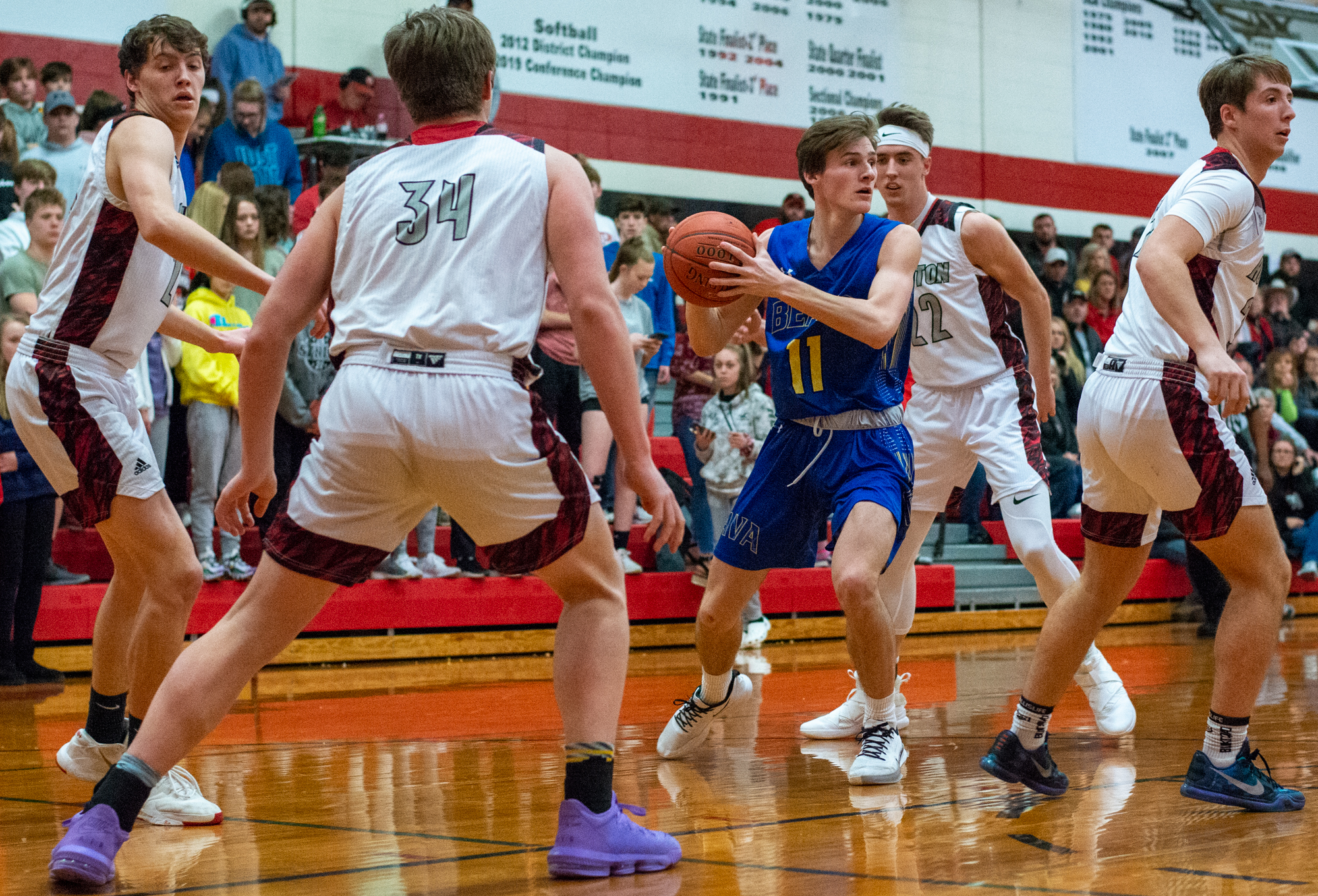 Clayton Moore had the first say in the second with a three-pointer from near the top of the key but was answered by a shot from Bruce to keep the Bears within two points.

Dalton turned up the heat inside on the Houston defense drawing two fouls and working for eight points in the second quarter. It was with that one drawn from Jaekan Moss which finally put Ava ahead by two.

“The goal is always to get (Dalton) touches inside,” said Seiger. “I felt like we did a much better job as the game progressed, doing just that.”

Blayne Mendel also chimed in with a bucket but it was Quinton Donley with a shot from outside which put the Bears within one point before kicking-off an 11-1 rally headed towards the 25-19 lead at the break.

In addition to their offense coming alive, the Bears’ defense was putting on a spectacle with broken-up passes, traps, and pressure to force Houston into a few stumbles. Jacob Gillies found the right spot at the right time for a pass break-up and Mendel went straight up forcing the Houston offense out-of-bounds on their end.

Nate Swofford came alive on both ends of the court in the second half, shooting for seven points and countless steals as the Houston offense started to establish on their end. Three of those steals resulted in drawn fouls, which Swofford took advantage of and put-in three from the line.

Meanwhile, the Bears weren’t getting some of the calls they needed, and wanted, on the offensive end. Three defensive fouls went against the Tigers, but with Swofford and Dalton driving through the lane for contested shots there could have been a few more fouls for Ava.

Nevertheless, the Bears’ defense held Houston to just eight points in the third. Six of those were from Ty Franklin who, like Swofford, started working the floor in the second half.

With a second–albeit, better–slow start the Bears took the third at 11-8.

“(We applied) ball pressure so they couldn’t see those easy looks inside,” said Seiger. “I mean, they’ve got some big horses in there. They are huge; 6’4”, 6’5” bodies. Big bodies, not just a bunch of rails. So, I commend the efforts of our postman inside for battling them all night long.” 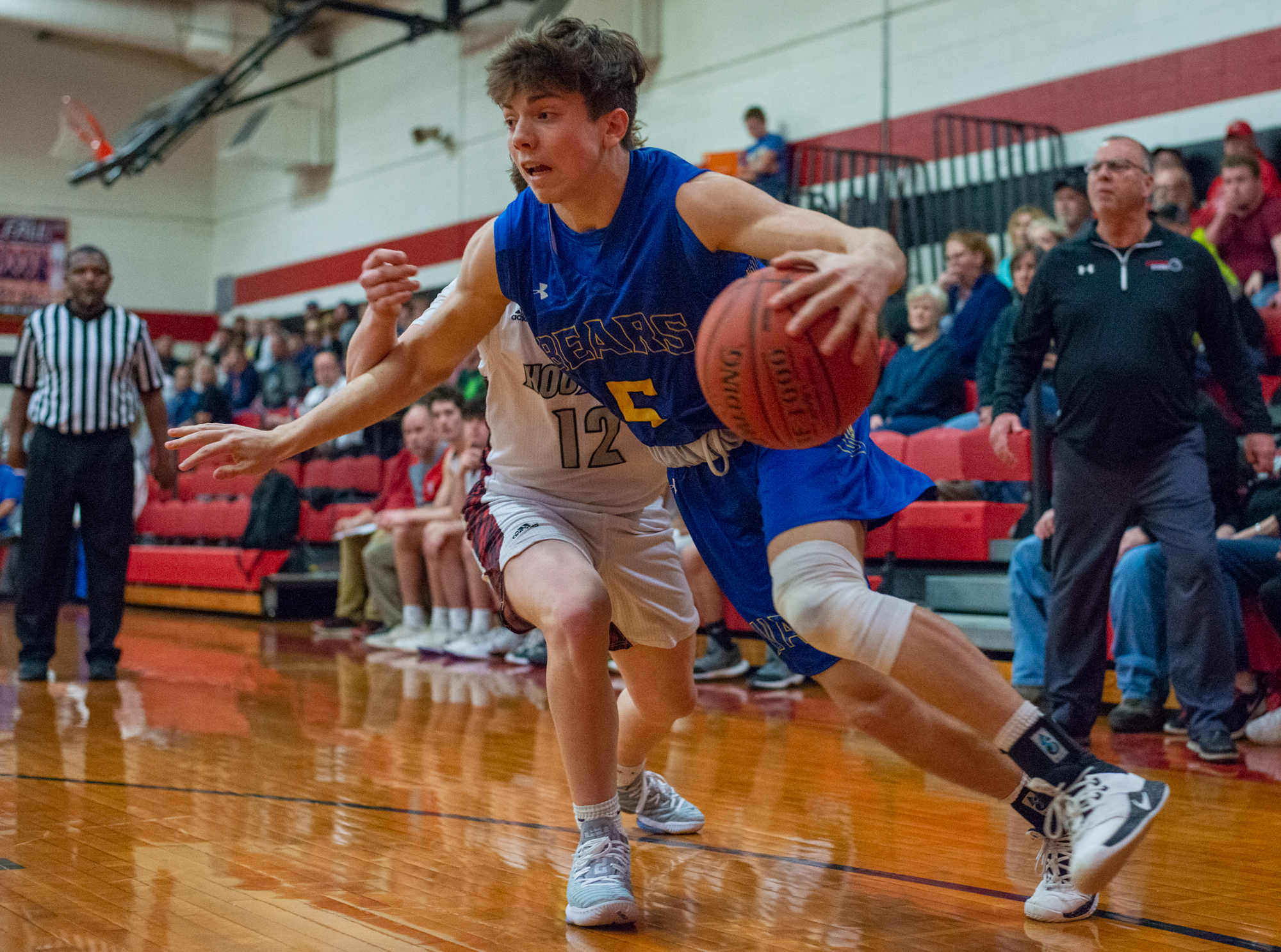 A 12-4 fourth quarter was in sharp contrast to the first eight minutes of the game. Again, the Tigers took the first points. This time from the stripe on a foul from Jacob Gillies allowing Ty Franklin to sink two.

Even with those two hits from the line the Tigers were still trailing by seven–and it was about to get worse.

Kaden Bruce started things off with one point from the line drawn from a foul by Kyler Ramsey right before Andrew Dalton took a charge and followed up by putting the Bears ahead by ten with 5:01 left.

Things got a little dirty from that point on. The Bears drew fouls for 11 points in the second half. Some of which came with a scare. Swofford snagged the ball, a steal, and started hauling it to the bucket when Houston defender Kyler Ramsey appeared to intentionally commit a push.

The collision sent Swofford full speed onto the floor and headfirst into the padding beyond the baseline. Swofford just got the push, but the entire Ava fan base believed Ramsey should have got an “X” from the officials.

The Bears had to settle for the two shots at the line without the inbound possession for the Bears afterward. While Swofford took a quick break, Donley came in and hit both from the stripe.

Aside from owning the court for three quarters, the Tigers had committed 21 fouls resulting in a total of ten trips to the bank where Ava made the deposit of 13 points.

“I thought our guards did a good job,” said Seiger. “When you give up 31 points in high school basketball at our level, you’ve done something right. I thought our physicality was where it needed to be tonight, (especially) defensively from the start.”

The Bears have a make-up game cluttering the schedule this evening in Mansfield, followed Friday with a trip to Salem to face another SCA competitor. The Mansfield match will have no C-Game, junior varsity will start at 6:00 P.M.