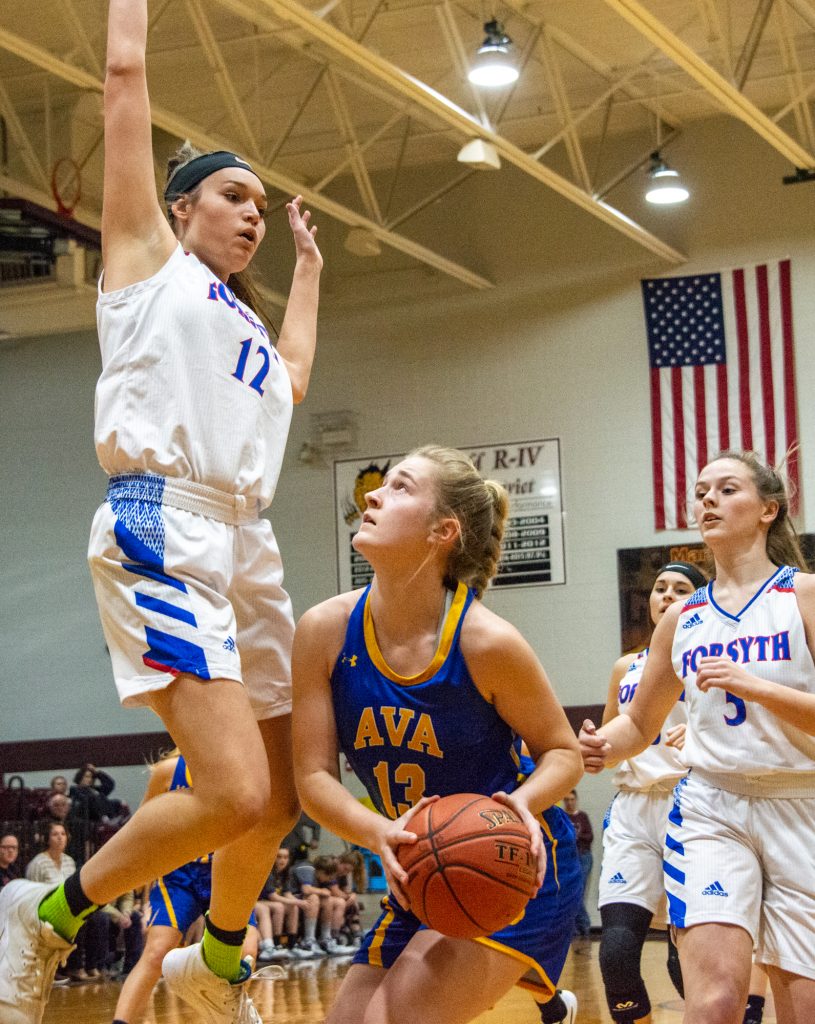 Ava High School senior Claire Fossett (13) waits for the block attempt by Forsyth's Scarlett Texeria to pass before taking the shot during a game in the second round of play at the 30th Annual Lady Lion Invitational Basketball Tournament on Thursday, January 30, 2020, in Mansfield, Missouri. (Jason Hoekema/Herald)

MANSFIELD – It really isn’t the loss itself which sparked postgame emotion amongst the seniors on Thursday. It was not being able to top Forsyth during their high school tenure in Ava. A culmination of struggle through four years of basketball.

In spite of a seven-point lead at the half and a four-point lead in the middle of the fourth, the Lady Bears blundered the advantages and fell behind, losing 44-42.

The first nails were driven into the coffin when Calley Matthews hit the three from the wing to tie the game at 34.

The final nails were driven when Emily Shipman hit a three, then a two to put the Lady Panthers up by three points.

Then came the final strike with 57.8 seconds on the clock when Matthews went unguarded and made a wide-open layup. Had that one mistake in man-to-man coverage not occurred, the Lady Bears could have held the inbound and called it a night, up by a point.

“Well, we (were) down the stretch,” said coach Nathan Houk. “We had a four-point lead with about three minutes to go and we turned it over five or six times in a row. They came down and scored. Then they hit a three the next possession and took the lead. We made a couple of tough shots, but we didn’t take care of the ball when we needed to.”

The Lady Bears took the seven-point lead early with a run of 12 against the Lady Panthers in the first quarter, winning the first eight minutes, 17-10. Then similarities started showing up.

The Lady Panthers tied with Ava in the second quarter on January 7th, and it happened again last Thursday night with both teams hitting the rim for eight points each.

With that Ava had maintained their seven-point lead into the break. A big difference from the teams’ previous match when Ava held a slim, 23-22, lead at the half.

Out of the box in the third quarter, the Lady Panthers went on a nine-point run topped off by a three-point-play by Trinity Sullenger after she drew the foul from Claire Fossett to go ahead by two.

Fossett answered with a bucket of her own, tying the game back up at 27 points. Later she screened for Hannah Evans who got a clear shot at the bucket for three, but the Lady Bears dropped the third quarter 13-9.

This put them into another narrow lead situation. Up by only three Shipman started the Lady Panthers’ final effort.

“They started pounding it inside on us because they’re physically bigger, a little taller than us,” said Houk. Once we made those adjustments, I felt like we had the lead going into the fourth quarter and all we had to do is just beat them or score even with them and we would’ve had them”

Forsyth players sat and scouted the Lady Bears last Tuesday and put a lot of pressure on Emaly Keyes and Olivia Gastineau on the following Thursday.

Keyes was unable to hit a clear shot for any three pointers and Gastineau – who hasn’t been below eight points since the game against Mansfield – was held to six.

Pressure from Forsyth kept the Lady Bears out of the lane in the fourth, which also helped the Lady Panthers recover and take the win with rebounds and successful buckets.

“That was our senior’s last chance to beat those girls, said Houk. “I’m proud of them. (Forsyth has) a really good team and we felt like we just let one slip through our fingers.”

Ava dropped down into the third-place bracket to face Springfield Catholic. 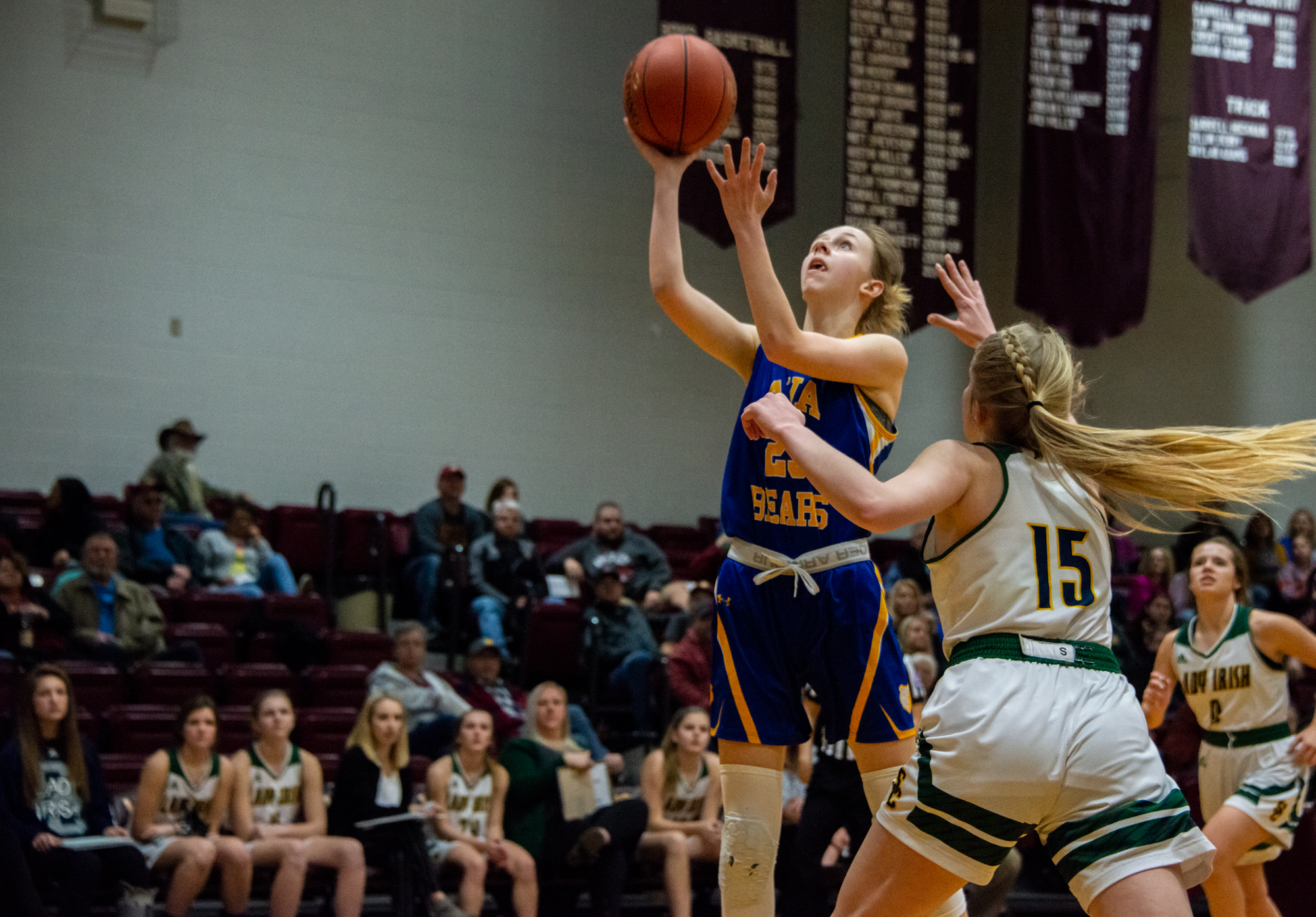 Ava High School sophomore Hannah Evans (23) elevates for an attempt at the bucket during the third place game against Springfield Catholic at the 30th Annual Lady Lion Invitational on Saturday, February 1, 2020, in Mansfield, Missouri. (Jason Hoekema/Herald)

Springfield Catholic has been showing off their greatest weapon, arc shooters. With their barrage of three pointers – eight on Dora, six on Mansfield – there was no doubt that the Lady Irish were going to attempt to beat the Ava Lady Bears from outside.

As it turned out, the Lady Irish could not keep up with the Lady Bears’ abilities in the lane and were outshot with two-point buckets, 12-2.

This and the constant drawing of fouls from the Catholic defense for 15 points, the Lady Bears prevailed and took home the third-place award.

The Lady Irish went up 6-0 early in the first with a pair of threes from Avery Swisshelm. As the two teams figured each other out the Lady Bears busted the game open with a 13-point run with no answer from Catholic.

Taking the first, 13-6, the Lady Bears were comfortably ahead. On offense Emaly Keyes hit the net twice from downtown while Hannah Evans added to the damage with a three-point play on a foul drawn from Mallory Wilson while giving up just one foul themselves.

The Lady Bears did give up the third quarter to the Lady Irish. In what appeared as a rally around the arc, Catholic hit the net four times right back from the break sending them on a 10-2 run.

Even by taking the third, 15-13, the two-point margin still didn’t null the offense produced by Ava. Returning fire in the third was led by Evans with six points plus a third three-pointer from Emaly Keyes – who scored nine points overall.

Eden Little popped up for one bucket and two assists, one to Evans and another to Fossett ending the third, 38-29.

Foul trouble started to worry the Catholic bench with Hayley Singleton at four and Avery Ahlstrand and Messerly with three before the game was over. The Lady Irish were still able to sink two more from the arc but could not get inside successfully through Ava’s man-to-man coverage. Instead Catholic shot four of eight in the fourth totaling ten points.

Ava on the other hand, picked up a second wind and went on a run of nine to open the fourth quarter.

It started with Olivia Gastineau picking up the and-one then a one-and-one to open the fourth and was followed with free throws from Fossett and Evans. Gastineau ended the quarter the same way she started it, from the line.

The Bears had made it through the long-distance efforts of Springfield Catholic, winning the game and the third-place plaque with a final score of 54-39.

Saturday’s game was led by Evans with 20 points and Olivia Gastineau with ten. Through the three games played by the Lady Bears, Evans put in the work for 59 points and Gastineau followed with 31.

Given the offensive effort from the two underclassmen, they were both named to the All-Tournament team. This third-place win means that the Lady Bears have brought home hardware from every tournament they have played in this season. 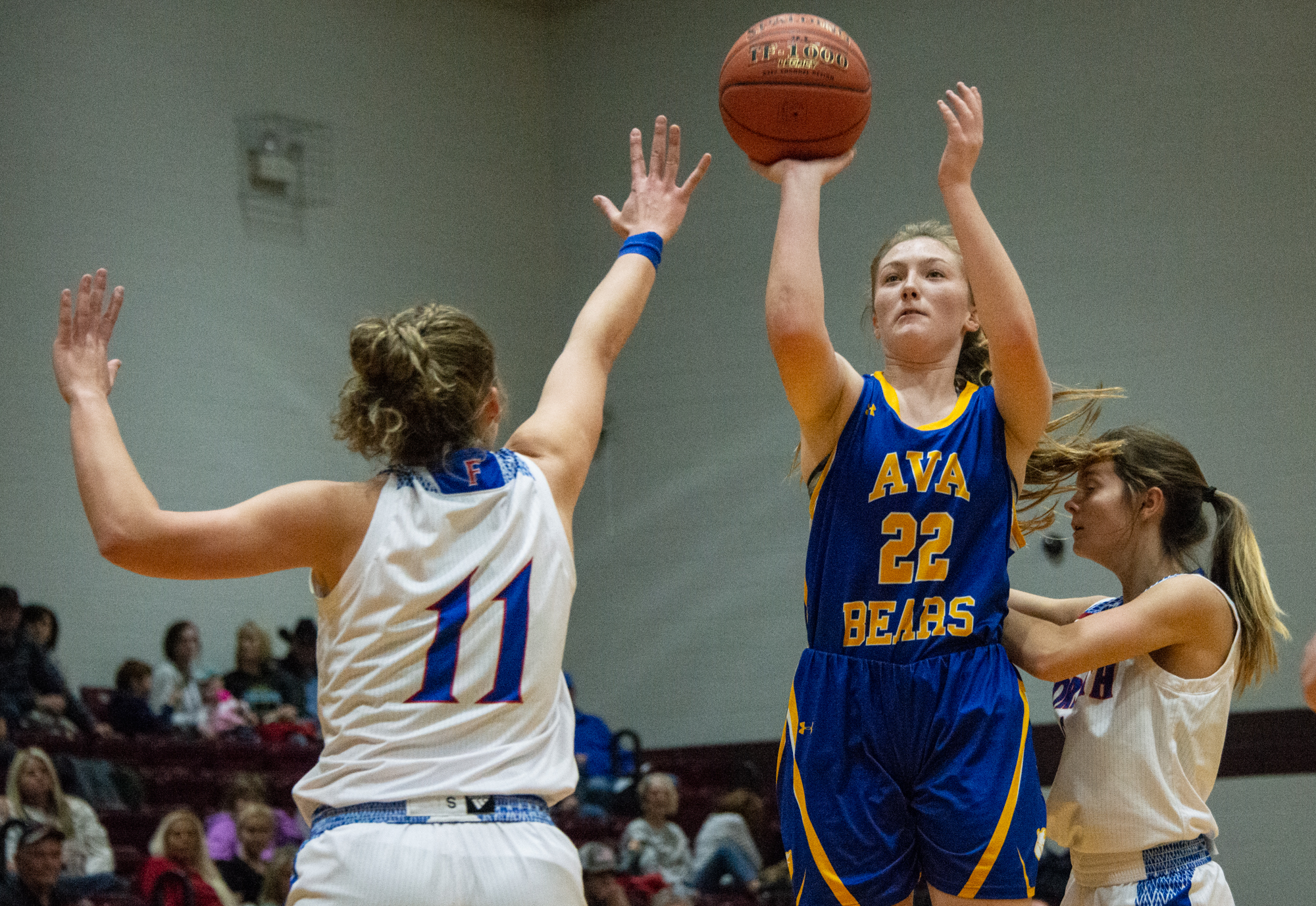 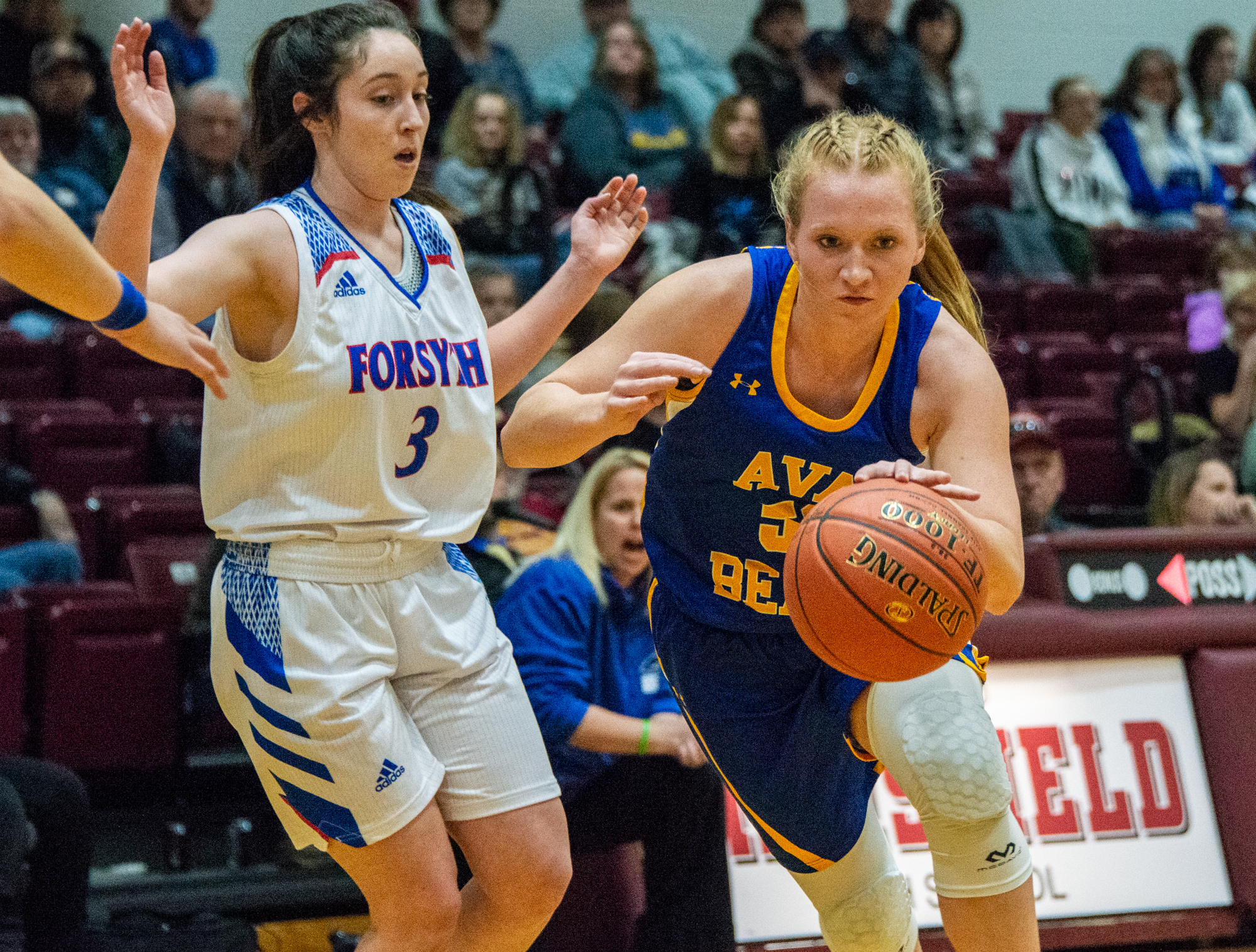