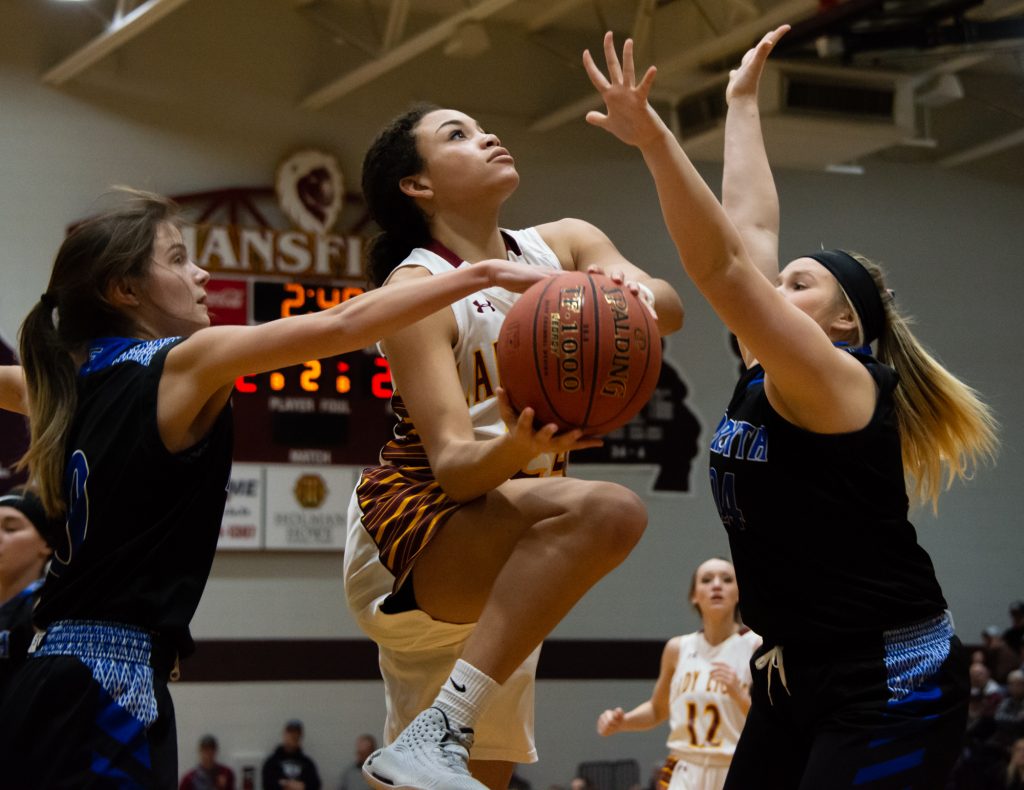 MANSFIELD – Play resumed last Thursday with second round games between Springfield Catholic and Mansfield followed by Ava against Forsyth.

Then consolation bracket competition took place Friday followed by the finals on Saturday. These pieces are in chronological order beginning Thursday and ending Saturday.

Thursday opened the second round with the Mansfield Lady Lions almost losing their grip on the tournament against Springfield Catholic.

The Lady Irish went right to it with five from Broadway in the first half while also working in the paint for another ten points.

Even with the artillery barrage in full swing the Lady Lions took it to the paint with Raine Roy leading with five points in the first. Jada Henry got open enough to shoot one from outside but the Lady Lions wound up behind by two at the end of the first quarter.

Disaster struck in the second quarter when Mansfield was held to five points by the Lady Irish defense. Even with a big denial and steal by Henry, the Lady Lions offense wasn’t anywhere to be found with just two field goals before the break.

A three from Henry and two from Madalyn Ivy.

Trailing 27-18 at the break it appeared that the Lady Lions’ time was up and would have to concede to the third-place bracket while Catholic moved ahead to the championship round.

Instead they came out of the break in a fury, blanking the Lady Irish 15-0 in the third to erase the debt and put them ahead by five.

Henry exploded in the third with four hits, two inside and two from the arc. A single bucket by Chloe Landsdown gave the Lady Lions the go-ahead, leading 28-27. Lauren Jones found her way inside and drew fouls for three points in the third, shooting a .667 overall.

For a lack of better terms, Catholic was shocked by the sudden turn of events. The game plan used to defeat Dora wasn’t working against Mansfield, at all.

After leaving them in their wake, the Lady Lions went on and kept the explosion going into the fourth where the Lady Irish scored just three points from Samantha Messerly while Mansfield went off for 12 points.

Henry didn’t cool down, hitting the bucket another three times in the fourth. In total she made 23 points for the Lady Lions with four from downtown leading the Lady Lions to a, 45-30, comeback win.

Other than the late start, the only other fault the Lady Lions had was shooting a .467 from the stripe with a potential of 15 total free throw points.

Their win moves them along to the championship round where they will play Forsyth, who defeated the Ava Lady Bears, 44-42, on Thursday.

Two to the House

Friday filled-in the left side of the bracket determining who would compete for the consolation prize this past Saturday. First tip off was between Conway and Dora High Schools.

Conway lost in the tournament opener against Mansfield, 65-29, and was put against the Dora Lady Falcons with their, 58-48, loss to Springfield Catholic on Monday, January 27.

Dora came out of the chute with 17 points over Conway’s ten to start the game in a healthy position. This came to use in the third quarter where the Lady Bears came out of the break and won the quarter, 14-11.

Conway has a bench of sharpshooters who made a total of eight three-point shots in Friday’s game. Even then, it wasn’t enough to undo the work of Riley Collins and Cassidy Hambelton who each shot for 16 points each.

Collins served up three buckets right out of the gate while Hambelton hit the three twice in the first in addition to another long ball byBriley McKemie.

The second quarter wasn’t forgiving, either.

The Lady Bears put up just nine points, five from buckets and four from shots at the line. Conway had an opportunity to hit a total of 15 free throws but shooting at .467 they only picked up seven points from Dora’s charity.

In the first half out of six trips to the line, the Lady Bears only came away with four points after shooting a .364 in the first 16 minutes.

The Lady Falcons fared better and shot a .654 after drawing a total of 22 fouls from Conway. In total Dora pulled 17 points at the line more than making up for half of the three-point hits fired by Conway.

Graceson Cromer led the team with 21 points while no other player hit double-digit scoring leaving the Lady Bears at 41 points at the final horn – in spite of the eight from downtown.

Dora dropped the third quarter but took advantage of the whistle in the second half when Conway produced 13 fouls.

This, coincidentally, led to 13 points from the stripe for the Lady Falcons, eight of which were shot by Cassidy Hambleton.

Dora’s final nine points of the contest were made from the line totaling to a 49-41 win and advancement to the consolation prize game.

Mountain Grove has not had a great time at the tournament after being paired up against Forsyth, the number two seed. They dropped the game on Tuesday, January 28, with a final score of 58-35 for the Forsyth Lady Panthers.

Later that evening Ava dropped Houston, leading to the contest between the Lady Tigers and the Lady Falcons.

Mountain Grove went straight for the post with Alisha Condos working the interior. With her build it was difficult for smaller Houston players to guard her or keep her from pushing in for a quick two.

In total she scored 21 points for the Lady Panthers but was moot after Houston’s Jaden Stell and Hanna Dzurick worked for a combined 31 points Friday night.

It was Stell who started the game off with a long three-point shot well outside the wing which she followed with a two pointer to send the Lady Tigers up 5-0.

On the other end Condos and Trinity Elliot made five each, both drawing fouls on the shot for back-to-back three-point plays. Following the first quarter, most of the Mountain Grove bench went silent on the page with Condos and Grayci Keeling being the only ones with buckets in the last three quarters.

Fouls were being called left-and-right on both teams Friday. The Lady Panthers let go of 17 fouls which provided Conway with a total of 11 points. Meanwhile Conway was hit hard by the whistle for 22 fouls giving the Lady Panthers ample opportunity to close the gap at the line.

Shooting 13 of 25, or a .520, the Lady Panthers missed out on several points Kelsey Watson made three trips with nothing to show.

The third quarter sealed the Lady Panthers’ fate after the Houston defense held them to two points. Mountain Grove was picking up the rebounds on both ends but were out run and couldn’t score in transition.

Not for lack of trying, in fact the Lady Panthers tied the game twice in the first half at ten and later at 16 points, but the dismal third ended it with a 46-37 win for the Houston Lady Tigers.

All in for the consolation prize were the Dora Lady Falcons and the Houston Lady Tigers in the first of three games to determine the podium order of the tournament.

The first went to Houston, 14-13, with Hanna Dzurick opening the match with a three-pointer starting a run of seven before Dora was able to answer with a run of nine.

The second started out with a tough situation facing Dora. With Houston finishing up an opening run of seven, it took three’s from Kaitlyn and Cassidy Hambelton to shore up the score before Kaitlyn broke open for another four points.

Tying the second quarter at 13 each, the teams were neck-and-neck in a win or be dropped situation.

The third quarter went to Houston, 16-7. The Lady Tigers took off on 12-4 sprint to open the board up by ten at the end of the quarter. Jaden Stell, with two threes under her belt already, hit another in addition to three-point plays by Ailyah Walker and Riley Sheets.

Meanwhile the seven points from Dora’s end of the court all came from Cassidy Hambelton who worked the paint for two, picked up an uncontested layup, then hit the net from outside.

The Lady Falcons acquired nine fouls in the second half where the Lady Tigers took them to the line for six points, nine overall.

Even with the late rally attempt for ten points in the fourth, it wasn’t enough for the Lady Falcons who fell to Houston, 55-43. 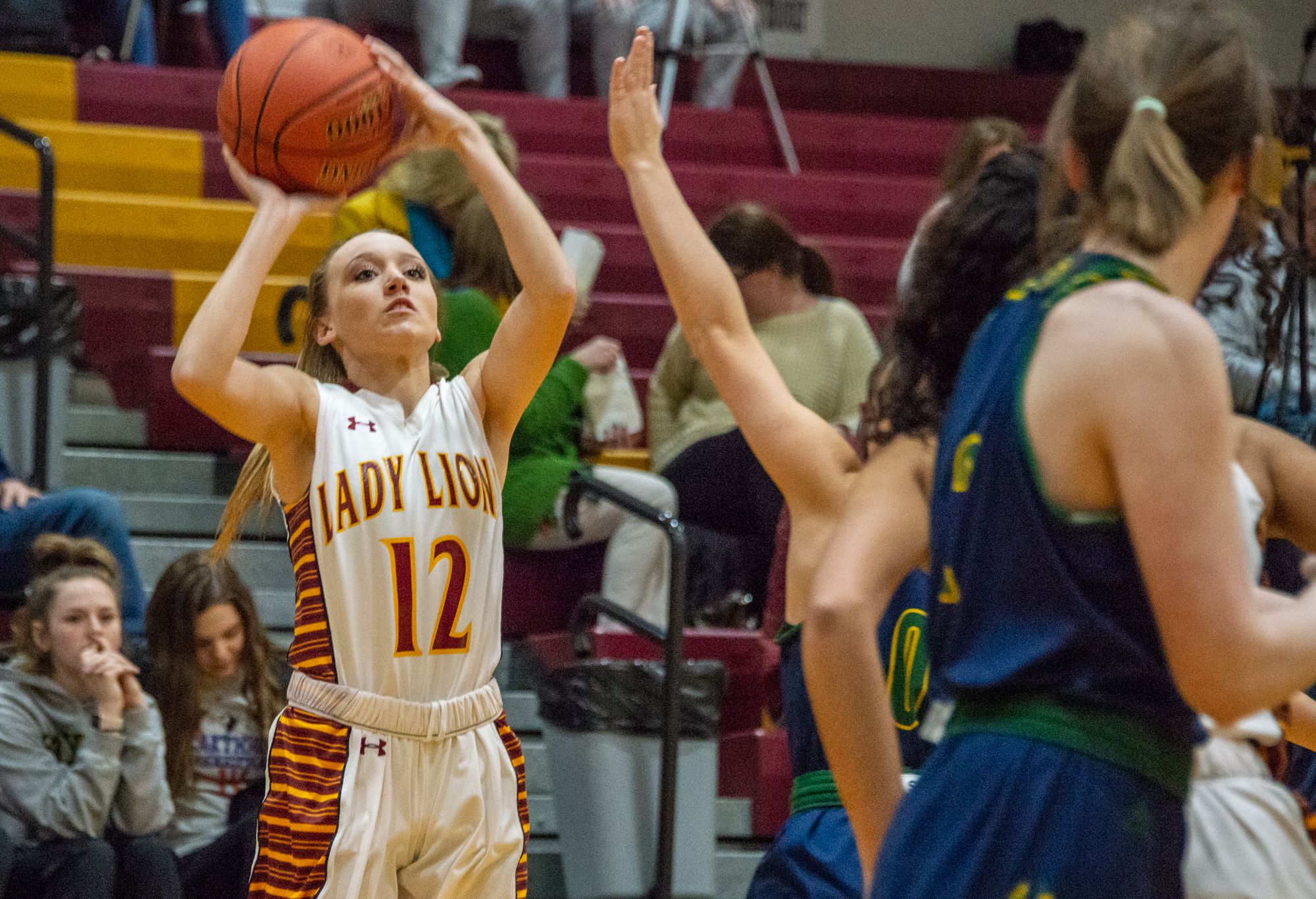 Mansfield High School’s Chloe Landsdown (12) attempts a shot during the second round of play in the 30th Annual Lady Lion Invitational on Thursday, January 30, 2020, in Mansfield, Missouri. (Jason Hoekema/Herald)