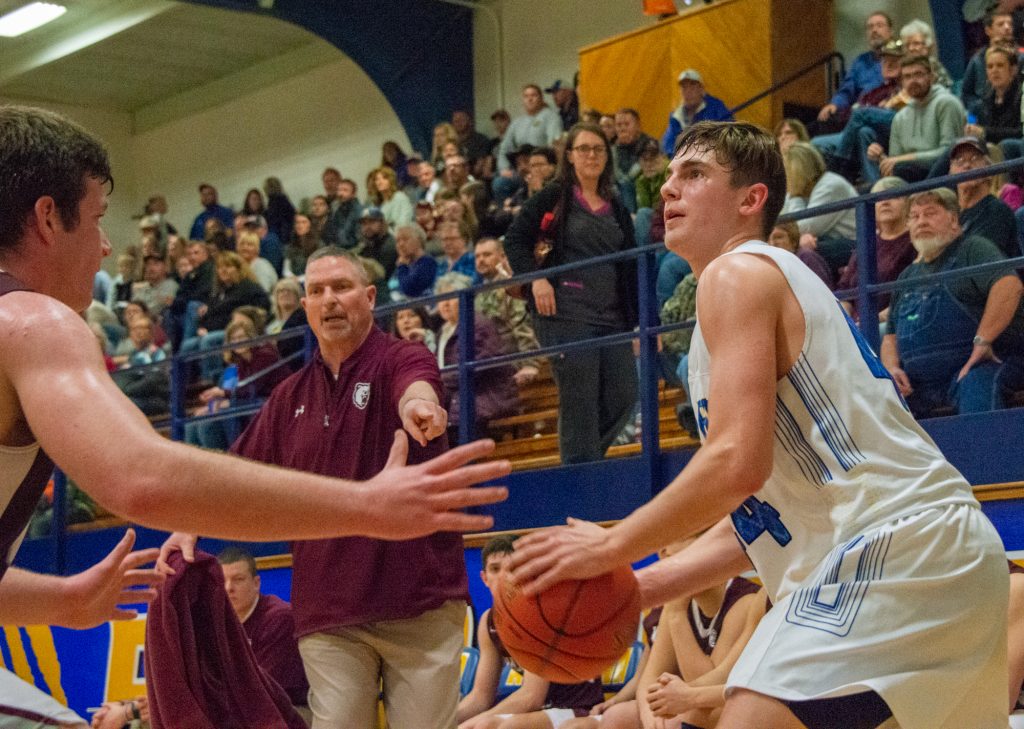 As the season progresses, so do the quality of teams the Ava High School Bears have to face. This includes SCA rival, the Willow Springs Bears who kept within one bucket at the half before Ava pulled away in the second half for the, 55-37, win Tuesday.

The gymnasium has had some subtle, but loud changes made inside this season. New padding, big bear logos on the north end, a new graphic over the dated wood siding behind the benches.

Tuesday added on to that with a new hype video, making Ava High School athletics feel more like a collegiate program instead of just high school teams.

Not the same opponent

Last time the two teams met was at the Mansfield Tournament championship game where Ava ripped open the first half with an 18-6 first quarter and never looked back.

This time it appeared coach Mike Wilson had made some necessary adjustments for the second round. Ava still took the first round with a six-point run to get up early over Willow Springs, 12-9 in the first but Ava had to work for it.

“There in the first quarter we missed some opportunities,” said coach Seiger. “We turned the ball over a few times. But nonetheless, you live and learn.”

Blayne Mendel drew first blood with a bucket from inside about a minute into the game and was quickly answered by Carson Lowe before the Ava Bears answered with a sprint for six points.

On defense Nate Swofford took a charge for a successful turnover before hitting a three-pointer followed by long shots from Andrew Dalton and Quinton Donley to stack nine points on Willow Springs.

Into the second quarter the Ava Bears had a slight hiccup going under Willow Springs, 12-11. Brady Walton and Gannon McGinnis chimed in with a pair of threes in addition to some inside work by Tryton Henley for four points.

“I thought they were doing a very good job on the offensive end,” said coach Damon Seiger postgame. “As far as being very methodical and very patient with the shot selection, you never try to force anything. In the shots they made, they got open looks.”

Dalton worked inside for six points and Donley his second of three shots from downtown. Neither team gave up the bonus even with turnovers and transitions occurring frequently between the two teams.

Ava had a very slim lead at 23-21 at the break. A different first half when compared to the December matchup. 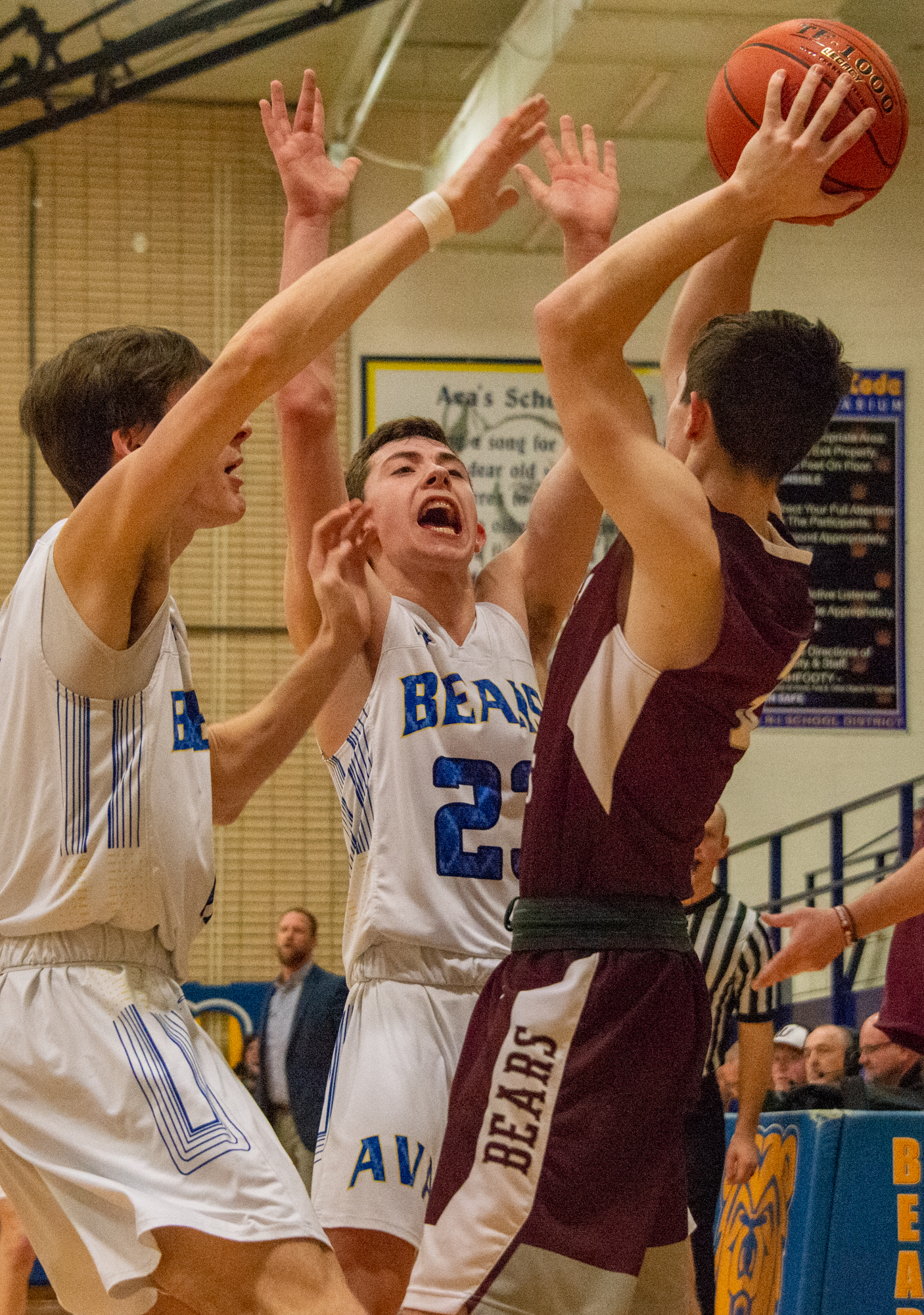 The boys are back

While the Lady Bears have worked for first place in Cabool and third at the Mansfield Invitational the boys’ basketball team was working the grind over at the annual Mountain Grove Tournament.

At the end Ava went 2-1 for third place, beating Mountain Grove and Liberty but dropping game two to the Dora Falcons.

But the past is past, the future is now.

Ava came back out of the locker room and took over the scoreboard with a 14-5 third quarter. One of the obvious differences between December and Tuesday was the diminishing offense played by Willow Springs this week.

Last game the rival Bears surged in the second half for 29 points inching back up but short of the Ava Bears. This time around point number dwindled as the Ava offense started with a seven-point run.

Nate Swofford scored the first points in the second half with a three resulting from a steal by Dalton on the other end of the court.

Swofford shot for a total of 13 points Tuesday, with three of Ava’s shots from outside. Donley did what Donley does and hit the net from the wings for nine points. Dalton had a three in the first quarter for a total of eight from Broadway.

This is the second highest number of three-point field goals made by the Ava Bears this season. Interestingly, it was done without Blake King.

“We had Kaden Bruce step up,” said Seiger. “Nate Swofford stepped up big. I thought Quinton Donnelly also stepped up. We know the impact in the player that Blake is to us. It was a total group effort, but I thought those three gentlemen really stepped up and played some basketball.”

The 6’3” senior with 21 three-pointers this season was absent Tuesday with the flu, which had a big regional uptick of infections in the past weeks.

The Ava Bears had a great third quarter, winning the period 14-5 followed by an 18-11 victory in the fourth. 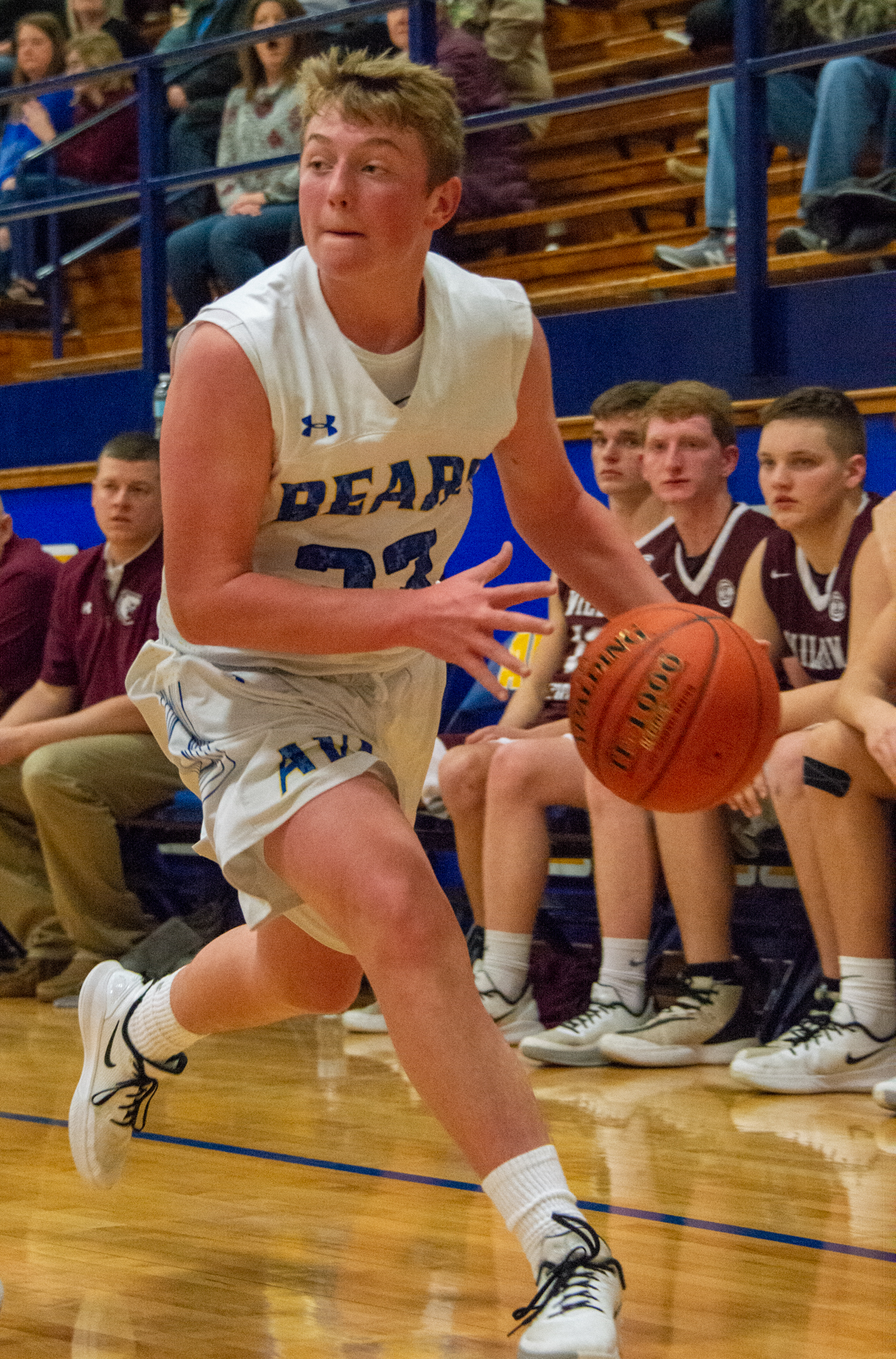 Ava High School junior Quinton Donley keeps the ball in motion near the corner as the Ava offense sets up during the second quarter of an SCA Conference game Tuesday, February 4, 2020, in Ava, Missouri. (Jason Hoekema/Herald)

The game certainly was not given to Ava, but it was a first half grinder as coach Seiger put it. However, Willow Springs committed a total of 15 fouls which led to ten trips to the stripe for Ava.

They took the rival to the bank, hitting 11 of 17 free throws for a .647 shooting percentage after Willow Springs gave up the bonus with 1:02 left in the third and the double early in the fourth. quarter.

Meanwhile, Ava’s 13 committed fouls resulted in just four trips to the line where Willow Springs was only able to garner two points.

In addition to the swarm of free throws the Ava defense was alive and well, holding Willow Springs to just five buckets inside while Ava had double the points and kept Willow Springs to five shots from the outside.

In every column, Ava led Willow Springs in Tuesday’s game bringing the season record up to 14-4, exceeding the previous season’s number of wins with at least eight more games to play before the district tournament.

“We are more fluid in everything we do,” said Seiger. We’re more comfortable with everything we do. The first time we played (Willow Springs) was our fourth game of the season, and we only had those football guys for a few days. I promise you tonight, even though the outcome was maybe nearly the same the last time, Willow’s gotten better, but all the same, we’ve gotten better. We’re just going to continue to push and see what happens.”