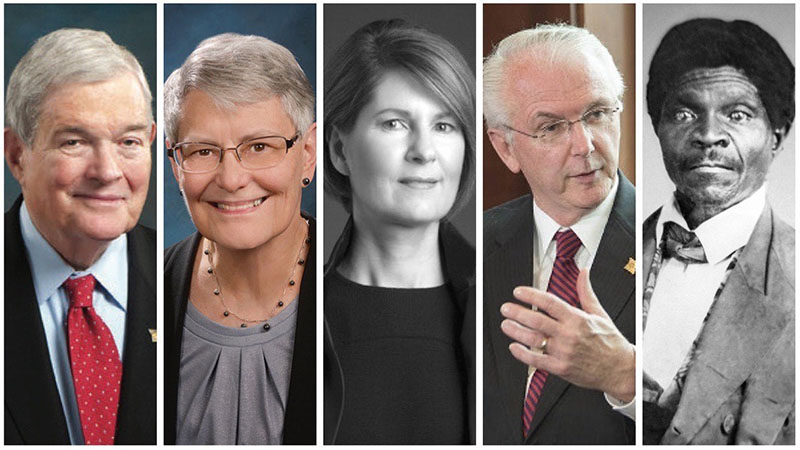 The five inductees were selected as citizens with a connection to the state of Missouri who serve as examples of global citizens. These individuals define the essence of public affairs, and have acted consistently for the benefit of others. Up to six recipients are honored annually, with each induction class including up to one legacy award, which will be awarded to Scott this year.

The induction ceremony will take place at the White River Conference Center in Springfield. The black-tie optional dinner event is from 6-8:30 p.m. April 17. Tickets are $40 and may be purchased online.

Over the course of 40 years of distinguished public service, Christopher S. “Kit” Bond earned a reputation as a skilled statesman able to build coalitions and effectively work across party lines to achieve results. He served four terms in the United States Senate, two terms as Missouri’s governor and one term as Missouri state auditor.

An obstetrician-gynecologist at CoxHealth, Dr. Patricia Dix has advanced the field of maternal-fetal medicine for more than three decades. She has dedicated her life to caring for mothers with high-risk pregnancies. Her commitment to helping women in need in the community is evident in her volunteer work, where she provides gynecological care for uninsured patients.

Wendy Doyle is a fearless advocate for women’s rights. She currently serves as the president and chief executive officer of the Women’s Foundation. Here, she focuses on addressing economic issues women face, such as paid family leave and pay equity. The foundation also promotes female entrepreneurs and campaigns for greater female representation on community boards and commissions.

Bob Holden served as Missouri’s 53rd governor from 2001-2005. He also served as Missouri state treasurer from 1993-2001, and three terms as state representative of the 136th Legislative District from 1983-1989. Currently, Holden is chairman and CEO for the United States Heartland China Association (USHCA). Through the work of USHCA, Holden continues to strive toward building bridges of global understanding through culture, education and business.

Born a slave, Dred Scott was a civil rights pioneer. He made history by suing for his and his family’s freedom. After years of appeals and court reversals, the case, known as Dred Scott vs. John F. Sandford, made it to the U.S. Supreme Court. The court issued its decision on March 6, 1857, which said the Scotts were not citizens, neither were any slaves; therefore, they had no rights to be respected. This case served as a major catalyst for the American Civil War. Scott’s legacy lives on in the fight for equality and justice through the Dred Scott Heritage Foundation.

This year’s inductees will join more than 25 others who have made positive impacts on the state of Missouri.