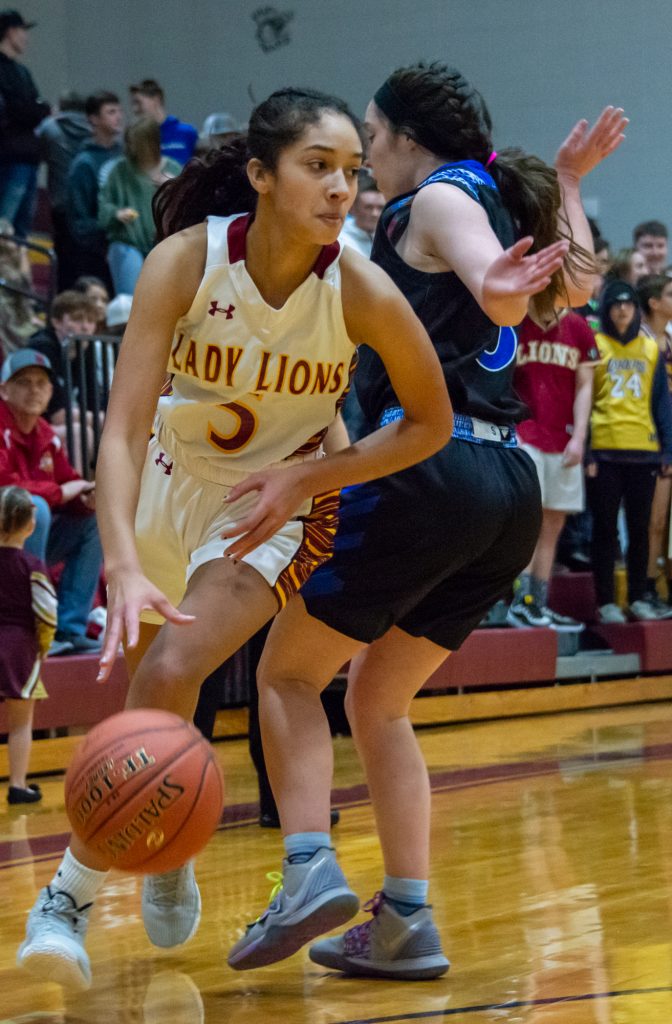 Mansfield High School's Jada Henry (5) corners around a Forsyth defender during the championship game of the 30th Annual Lady Lion Invitational on Saturday, February 1, 2020, in Mansfield, Missouri. Henry was named the tournament MVP after scoring 31 points in the game. (Jason Hoekema/Herald)

MANSFIELD –– With Forsyth dropping Mountain Grove by 23 points and narrowly escaping the Ava Lady Bears, Saturday’s championship game was expected to be a thriller.

Forsyth came into Saturday’s matchup with 102 points in the tournament while Mansfield was slightly higher with 110. Fortunately for the Lady Lions, the narrow point margin didn’t hold up for the Lady Panthers who dropped the game, 75-44.

Double Out the Door

The first quarter set the tone for the final game of the 30th Annual Lady Lion Invitational with Mansfield racking up 31 points over Forsyth’s 15. Jada Henry worked for ten points out of the chute while Chloe Landsdown hit the net from outside twice.

Add another three from Haley Tripp and Logan Jones and it is easy to see how Mansfield kept the trophy at home.

Helping the situation for the Lady Lions was an early departure of Forsyth’s Emily Shipman, who picked up a technical foul for an unsportsmanlike incident on the far end of the court in the first quarter. It cost the Lady Panthers because Shipman is capable of dealing damage.

She led the Lady Panthers past Ava with 20 points on Friday evening and was able to score eight in the third quarter against the Lady Lions. Her presence could have narrowed the outcome on Saturday evening.

With Forsyth in lower-than-optimal spirits, the Lady Lions kept up the pressure with another 19 points in the second. Jada Henry came up with another nine points, 19 total at the break, and Raine Roy picked up another six bringing her up to 12 at halftime.

Lauren Jones took the Lady Panthers to the line on two free throws from the technical and the one-and-one drawn from Landry Stewart in the second. She was perfect from the line, as was Henry who picked up eight points from charity.

The horn blew, marking the end of the first half with the Lady Lions dominating the game, 50-25, with only Roy flirting with foul trouble.

On the other bench Shipman was already in trouble with four fouls in the first quarter, including the technical. Landry Stewart gave up three fouls in the first half as well, making two dealing with the possibility of short minutes. 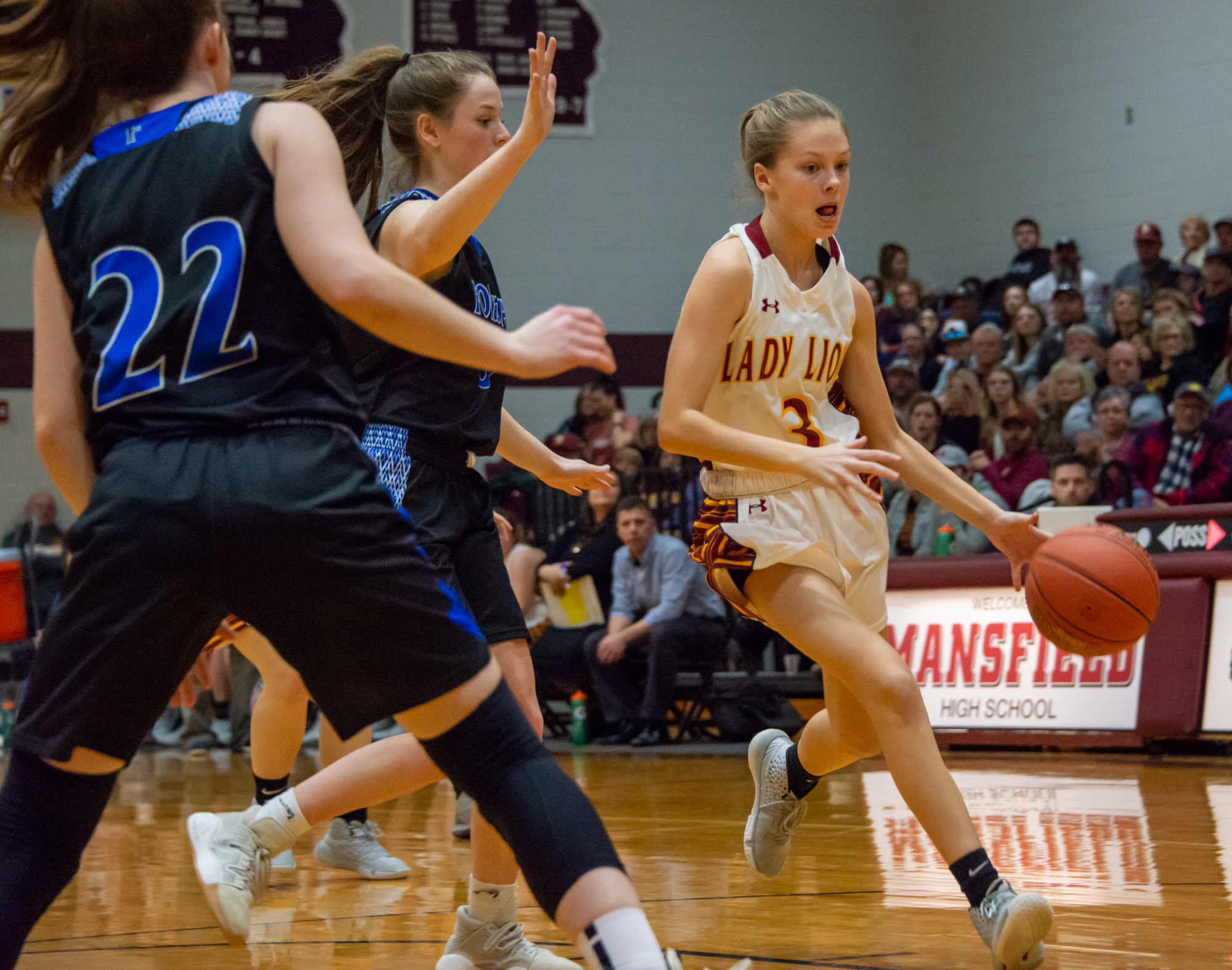 Mansfield High School’s Logan Jones (3) moves the ball into the paint during the championship game of the 30th Annual Lady Lion Invitational on Saturday, February 1, 2020, in Mansfield, Missouri. (Jason Hoekema/Herald)

Jada Henry shot out into the second half with a bucket to open up an eight-point sprint for the Lady Lions. Part of the change involved the return of Shipman, who score eight of Forsyth’s 12 points in the third quarter.

Scarlet Texeira came up with two points from a foul drawn from Natalie Quick, but also gave up her third and fourth fouls halfway through the third quarter.

Both of those were on the floor, which saved the Lady Panthers from giving up more points at the line. In total, Mansfield took them to the cleaners by shooting a .700 for 14 points.

Henry wasn’t able to come up with more than six points right after the break, but a pair of buckets from Madalyn Ivy and Lauren Jones kept things going for the Lady Lions.

Still trailing 60-37 at the start of the fourth quarter, Forsyth fell apart in the final eight minutes of the game. Both Shipman and Texeira fouled out. Shipman was out before the midpoint of the quarter, benched with 4:41 left in regulation.

Texeira followed shortly after giving Roy two attempts from the line with 3:51 remaining. Calley Matthews, another capable player who worked as the ball handler for the Lady Panthers, chimed in with a three-pointer followed by pair of buckets from Kloe Hendrickson and Meadow Mardis to make up the final seven points Forsyth had.

Back on the other end of the court the Lady Lions came up with 15 more points in the final quarter with Henry making six, one on a defensive rebound while Tripp hit the bucket twice from outside then again inside for eight points.

Roy drew two fouls but made just one from the stripe after shooting a .200 through four quarters. By the time the horn sounded, the Lady Lions had amassed 75 points and led Forsyth 31 at the end of regulation with 20 buckets inside and seven from Broadway.