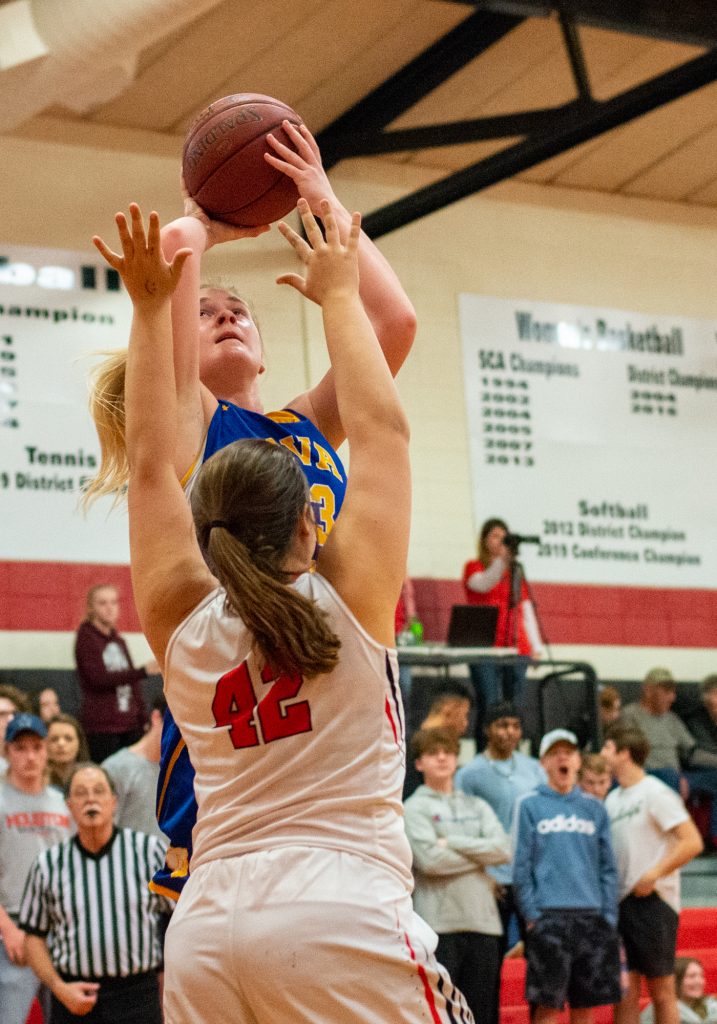 HOUSTON–Given the weekend celebration involving a rodent guessing the weather – or the man from the Inner Circle this year – Ava had a second go at the Houston Lady Tigers. Like watching Bill Murray repeatedly wake up at 6 A.M., The Lady Bears won, again.

In the world of numbers, both teams had a better outing at the Mansfield Tournament this past week. The Ava High School Lady Bears dipped from 25 two-pointers to 18, four from outside to just two, but drew costly fouls and shot a .813 for 13 points Monday.

Baylan Alexander plays the reliever role and is a capable player in the post, helping to keep legs fresh for 32 minutes of up-and-down the maple. Her role may not always be on the starting five, but in the second half of Monday’s game she lit up the Houston defense for seven points.

Her first bucket came on an assist from Claire Fosset who made the bounce pass inside to Alexander for two. Then she took the inbound from the baseline and sunk the ball as the whistle blew near the end of the third.

Picking up the three-point play put her at five points and was the start of a seven-point sprint by the Lady Bears in the third quarter. Another bucket in the fourth put her in the top four scorers from the game but reigniting the Lady Bear offense makes her this game’s unsung hero.

“She played really well for us off the bench defensively and offensively, got some buckets for us that really gave us a boost,” said coach Nathan Houk. “Big points coming off the bench.” 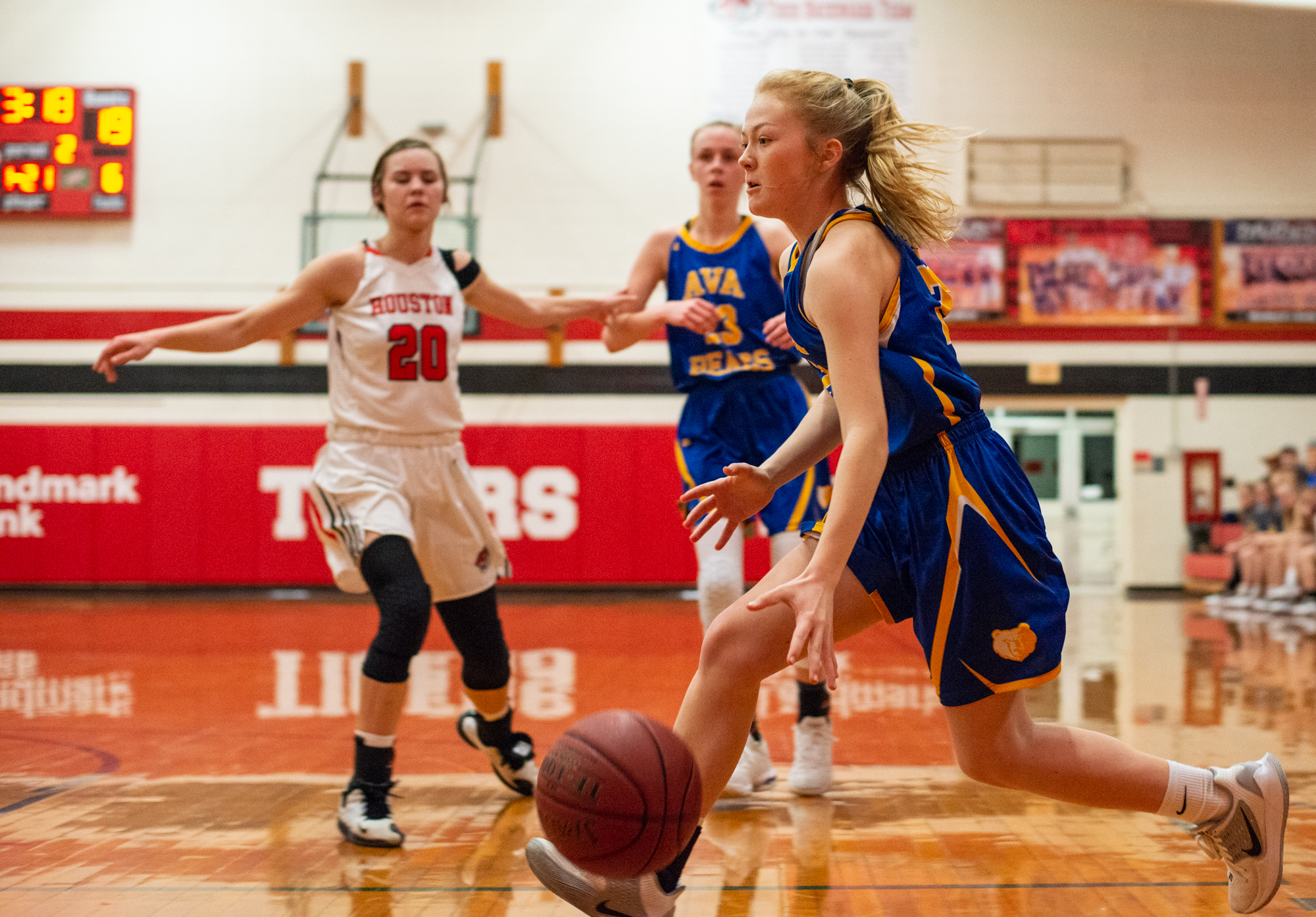 Ava High School freshman Lexie Gastineau (21) gets an avenue to the bucket during an SCA Conference game against Houston on Monday, February 3, 2020, in Houston, Missouri. (Jason Hoekema/Herald)

When the two squads met on January 28, at the Mansfield Tournament the Lady Tigers were slaying it from the arc with ten from downtown. Fortunately, the Ava defense did well in keeping them out of the paint while piercing through Houston for 50 points from inside.

Having seen the Lady Tigers once and in action against the Lady Bears coach Nathan Houk made keeping the arc shot down a priority.

“Well, we looked at what they were successful at when we played them in the Mansfield tournament, and tried to take some of that away. We did a really good job of it,” said Houk.

Chipps was kept at two but it was a hamstring pull in the first quarter which put Stell out of commission for a few minutes. She regrouped with the team, but only shot for five points making a big difference.

“The last time we played them, they made 10 threes,” said Houk. “We were trying to take the three point shot away from them hoping that they didn’t shoot it as well.”

Interestingly, Monday’s point difference was 24. This happens to be the same number of points Stell had against the Lady Bears at last week’s tournament.

However, Ava was not the only team which made preparations for the second round. Last game Olivia Gastineau shot for 15 points with three inside and three outside. She was second only to Hannah Evans in total points in that game.

Monday the Lady Tigers had her locked down while the whistle forced her to play more on the conservative side, giving up her fourth personal foul late in the third quarter.

Meanwhile Fossett and Evans shot for a combined 27 points with Fossett inside making the shot from underneath the steel and pulling four defensive fouls for an six additional points.

This was up a notch from the last game where Ava surged for 16 points before, then 18 points after the break.

Evans and Fossett continued to be the powerhouse duo Monday opening the third quarter with a defensive steal by Evans resulting in the first points of the second half with a bucket from Fossett.

Back in the second quarter Evans found the hoop twice inside and twice outside with a spirit-snatching three-pointer right before the horn signaled halftime. Ava went on a 21-1 run to close the first half, surging past Houston 26-11 at the break.

Even though the Lady Lions crept back up a bit with 13 points in the third, coach Houk addressed the defensive issue while the Lady Bears hit 20 points.

“We had some breakdowns on defense, said Houk. “That happens when you when you have a young team. We called a time out, talked about it, made some adjustments and it didn’t happen more. That shows that the kids are listening, learning and really trying.” 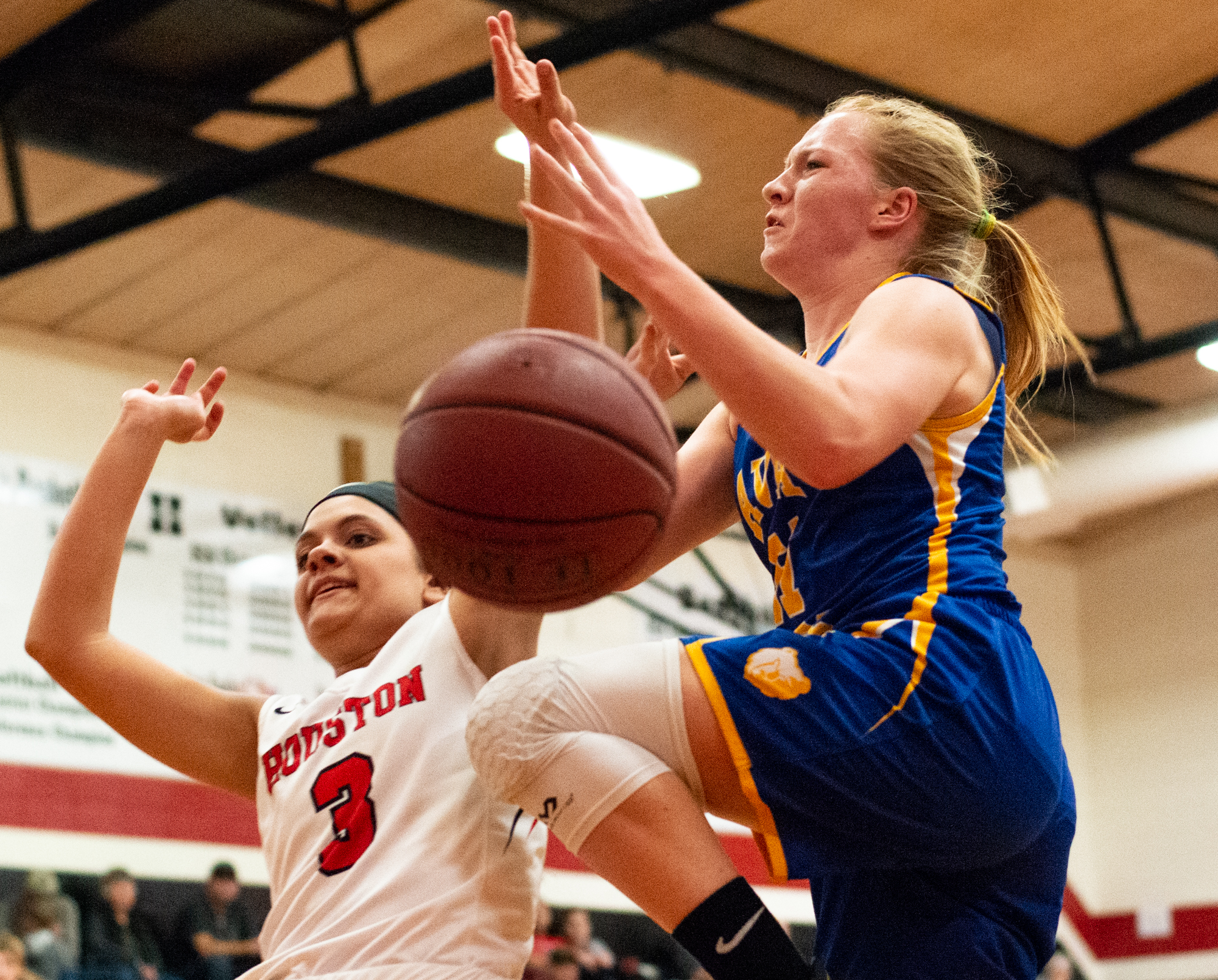 Sharing is Caring, Sort of.

The Lady Bears came up with their second highest free-throw percentage of the season with a .813 against Houston. So far, they topped out at .846 percent for 11 points against Forsyth in Mansfield.

Baylan Alexander, Hannah Evans, Eden Little and Keeley Akers were perfect at the stripe in their trips to the top of the keyhole. It was Fossett with four trips to the line for six points – her highest this season – which helped take the wind out of Houston’s sails.

Ava returned the favor allowing a total of 12 shots from the line. It was Houston’s poor shooting percentage, a .333, which left them with just four points to show for it. Karlee Curtis was one-for-four from the line, drawing two fouls from Evans in the first half.

The Lady Bears continue their season with a game today on the road against Salem (11-6) and will be taking to the asphalt through February 17th.