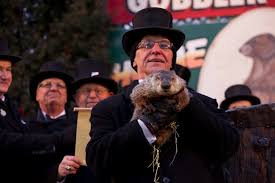 Groundhog Punxsutawney Phil is coming out soon to see or not see his shadow on his big day, in Punxsutawney, Pennsylvania.  If old’ furry Phil wants to fly first class or even coach anywhere, he had better do it this year. The chances are he will be walking or riding with a friend in a car next Groundhog’s day.

A new rule proposed by the U.S. Department of Transportation would permit airlines to stop accepting emotional support animals on planes allowing only service dogs that are professionally trained to perform tasks or assist passengers with disabilities, including psychiatric disorders.

I’m all for this as airplanes have started looking like Noah’s Ark or flying zoos.  Who wants to ride on an airplane with birds, cats, pigs and whatever anyone imagines to be their emotional support creature? Maybe you do. A lot of us do not.

This has developed into a lot malarkey over the years. Carole and I were traveling back from Maine several years ago. We had bought tickets well in advance so we could have the two front bulkhead seats. This was a small plane and our seats weren’t considered first class, but we had three or four more inches of leg room. Before boarding our flight, we heard our names called on the airport public address system. We went to the check-in counter and were almost told that we needed to give up our seats for a man with a disability and his wife who had service animals. We were young, naïve and gullible so being tenderhearted people we said okay.

The agent assigned us to the two seats directly behind our old seats which meant no extra leg room that we had planned for months in advance. The guy gets on the plane and he and his wife appear healthier than we are. He was wearing a hearing aid, but he was seeing and getting around fine as was his wife. With these people were “three” dogs. Yes, three dogs! The only thing I could tell that these dogs could do was stink up the area where we were sitting. To add insult to injury we had to ride now behind our original seats with these dogs occasionally starring at us.

I’m not doing it again. Many years ago, I developed a blood clot from extended travel and I’m not giving up my seat for some person who needs to sit and pet their dog. I’m not an animal hater. I love animals. I had a dog in my house for sixteen years. For people who truly are disabled and need a documented trained service dog then that’s okay but plan and buy your ticket in advance instead of bumping someone else out of their seat for your “dogs.”

Most real trained service dogs are better behaved than some passengers. It’s just finally time that our airlines can get some control over the zoos flying through the sky.