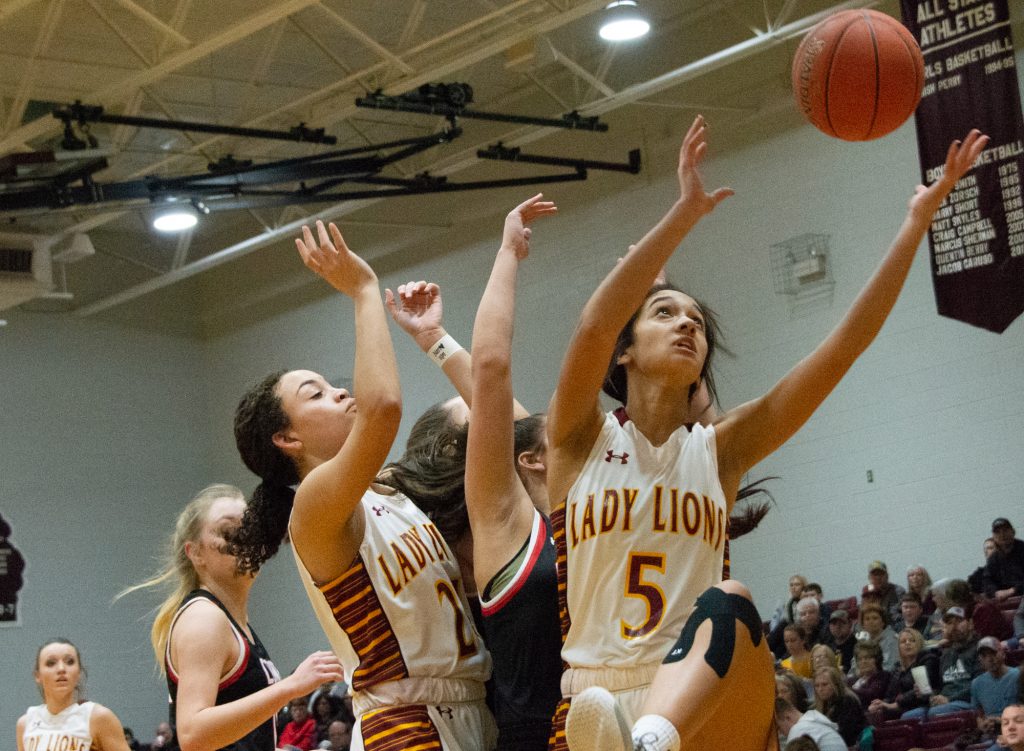 A group of players collide including Mansfield's Jada Henry (5) and Raine Roy as they attempt to pick up the offensive rebound during a game against Conway High School in the first round of play at the 30th Annual Lady Lion Invitational on Monday, January 27, 2020, in Mansfield, Missouri. (Jason Hoekema/Herald)

MANSFIELD – Yes, the Katy Perry song uses a tiger in the lyrics, however,  the now 13-5 Mansfield Lady Lions were paired against the bottom seed and there was little doubt of the outcome of the first game in the 30th Annual Lady Lion Invitational.

The first quarter cast a bit of doubt on the thought, though. At the end of one Mansfield had a small two-point lead over the Conway Lady Bears who are now 6-9 this season.

For lack of a better word, the game started slow with Conway striking first 43 seconds into the game on a free throw by Lakyn Shelton. Then a two from Graceson Cromer who led Conway with 18 total points.

The Lady Lions picked up two, then took off on a seven-point run taking Mansfield up 9-5.

Chloe Landsdown showed up big for the Lady Lions early in the game with two buckets, one a three-point play, on top of three freebies at the stripe. Landsdown was perfect at the charity stripe, shooting five-for-five.

With that same energy from the first quarter the Lady Lions took off on a 9-2 run in the second where Mansfield dominated Conway, 23-7.

Threes from Megan Langley and Jada Henry echoed the seven two-point buckets the Lady Lions made in the second quarter. This time Henry was leading the Lions with nine points.

Into the break the Lady Lions had only given up four fouls for only three points while shooting a .857 for six on fouls drawn from the Conway defense.

After the break the Lady Lions came back out and did it again with a 24-11 third quarter which put them well ahead of the Lady Bears at 58-27.

Langley hit the net twice from outside late in the quarter after the Lady Lions had already gone on two runs, one of seven then another of ten. Lauren Jones led in the third with seven points.

The pace dwindled as Mansfield rotated relievers off of the bench in the fourth quarter where the Lady Lions still won at 7-2. Mansfield completely denied Conway in the fourth, forcing them to score at the stripe.

Jones led the quarter with four, shooting 13 total points in Monday’s game.  She tied with Landsdown on points, but none were from drawn fouls.

On top of the roster was Jada Henry with 17 points from six buckets, a three-pointer and two from the stripe.

With Monday’s win, Mansfield moves right on the bracket and will face Springfield Catholic on Thursday at 6 P.M.

Luck of the Irish

The Dora Lady Falcons almost had it, three times. It didn’t help their cause with the Lady Irish running out of the gate with nine points and made three three-point shots in the first quarter.

Mallory Wilson was a force to be reckoned with, and the Lady Falcons didn’t appear to have an answer for her as she led Catholic with 28 points.

Two of those long shots made by Wilson were in the first quarter in addition to one more from Avery Swisshelm. The Lady Falcons only allowed two buckets in the lane, but the sharpshooters hit the steel eight times in Monday’s game.

Dora fell behind, 15-10, and into a manageable deficit if they could overcome the Lady Irish in the second quarter.

They did just that with a 17-14 second quarter where they tied or went ahead on three occasions.

The quarter came with an answer from outside by Abby Kelly, and McKenna Miller on a solo layup to tie the game at 15. The weight of the team, however, fell on Dora ace Cassidy Hambelton.

Hambelton shot for 23 points but was short of neutralizing Wilson with 28 – a career high according to the school’s Twitter account – on the other side of the book.

In the third quarter Hambelton hit a three to tie the game up at 37, but like the other times when Dora could have taken over momentum – they didn’t.

Dora did out-shoot Catholic from the stripe with a .813 compared to .538. Even then, fouls were costing them in the second half where Catholic made nine points from the stripe.

With these wins Springfield Catholic and Mansfield moved right and into the championship bracket where they will play on Thursday at 6 P.M.

In the consolation bracket of the tournament Dora will face Conway on Friday at 6 P.M.

Forsyth ripped the game wide open with a 19-5 first quarter of play. Callie Matthews was practically unstoppable with 11 points in the first eight minutes. Then with Kaylee Henning chiming in with a pair or threes meant no return for Mountain Grove and no looking back for Forsyth.

Mountain Grove had just two big shooters in Reagan Hoerning and Alisha Condos for a combined 22 points at the end of the game. On the other end of the court those two were not enough to neutralize Matthews and Emily Shipman who shot for a combined 32 points.

Mountain Grove couldn’t find the traction they needed on the court in the first half, even with putting the work for ten points in the third, Forsyth still out gunned them with 16 thanks to threes from Shipman and Triniti Sullinger plus eight points between Scarlet Texeria and Meadow Mardis.

Forsyth moves on to have a “rematch” against the Ava Lady Bears today at 7:30 while Mountain Grove will have to deal with a sharp-shooting Houston Lady Tigers offense. 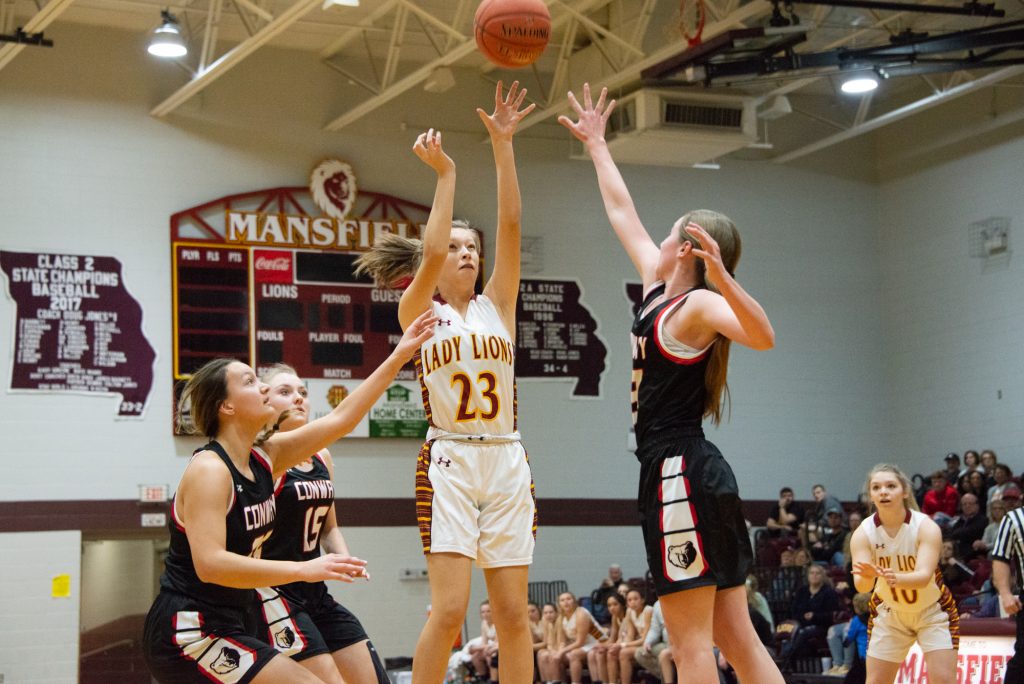 Mansfield High School’s Lauren Jones (23) makes a shot attempt over the Conway defense in the first round of play at the 30th Annual Lady Lion Invitational on Monday, January 27, 2020, in Mansfield, Missouri. (Jason Hoekema/Herald) 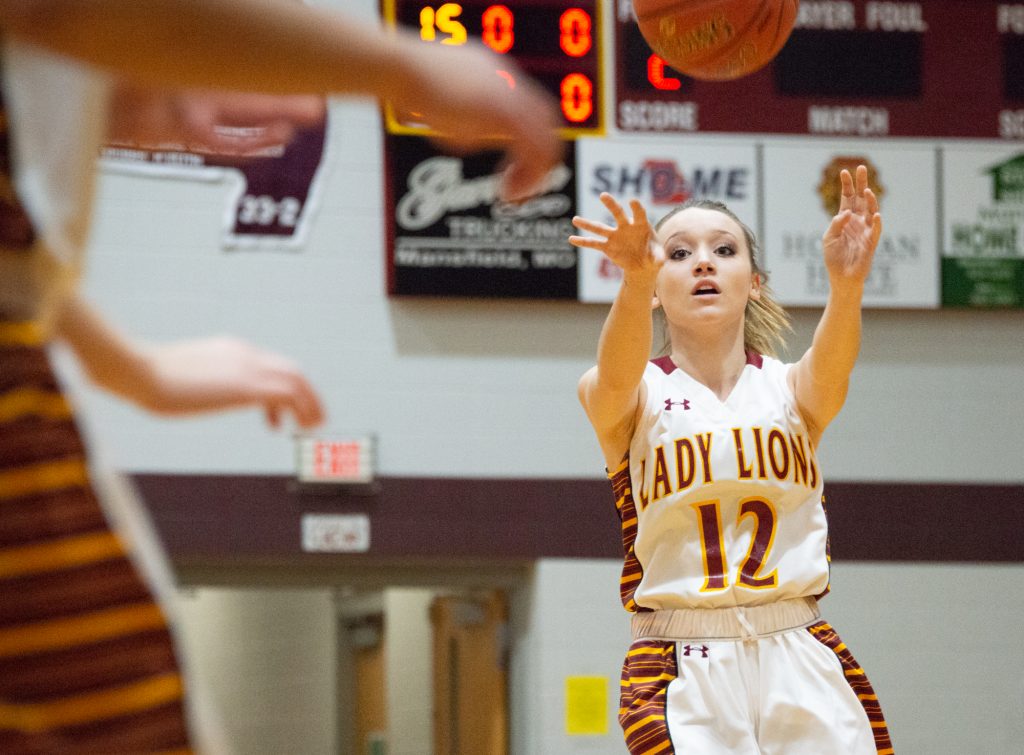 Mansfield High School’s Chloe Landsdown (12) makes a pass during the first round of competition against Conway in the 30th Annual Lady Lion Invitational on Monday, January 27, 2020, in Mansfield, Missouri. (Jason Hoekema/Herald)