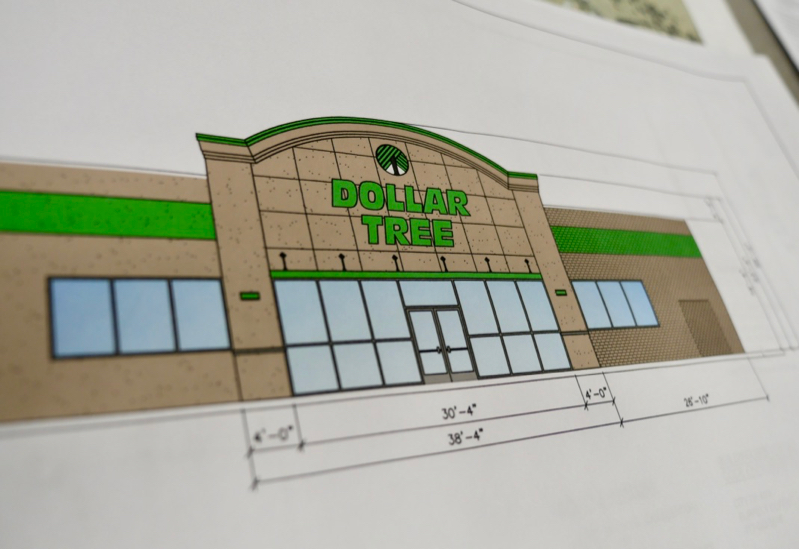 Michael Boyink/Herald The blueprints for the renovations at the former Ava Victory Academy building shows a Dollar Tree store occupying the west end of the building.

On Tuesday, January 28th, 2020 the Ava Board of Aldermen convened for a business session at 5 p.m.

During the comments portion of the meeting Ava Mayor Burrely Loftin announced that the former Ava Victory Academy building at 1005 Springfield Road was under new ownership, and the new owners had leased approximately 45% of the building’s space to Dollar Tree Stores out of Chesapeake, Virginia. The store will reside in the west end of the building, with its own entrance and signage.

The store opening date is yet to be determined, as renovations to both the buildings interior and exterior are ongoing.

City Treasurer Peggy Porter reported that the city had achieved a 100% score in a recent Mirma audit. According to its website, Mirma is “an incorporated association which establishes a protected group self-insurance program for its members.” Porter said the audit was in-depth, involving vehicle inspections and more. Mayor Loftin said that Ava and Macon, MO were the only two cities to receive the 100% score on the audit.

Lofin reported community interest in the Grain Belt Express project, which is a proposed 800-mile long transmission line project currently being considered to bring wind power from Kansas, through Missouri, into Illinois and terminating in Indiana.

Loftin was hopeful the project would move forward, but warned residents that any savings to local electric rates would be at least five years out.

(Editor’s note: This past Monday, the Missouri House of Representatives voted in opposition to the construction of this project. It was the second time they’d done so in the last two years. The issue is heading back to the Senate.)

Mayor Loftin noted the recent ending of the filing period for city council candidates. With no opposition coming forward, East Ward Alderman Keith Jones and West Ward Alderman Stan Lovan will be sworn in for new terms with no election necessary.

Loftin updated the council on the condition of the Street Department’s storage shed. “It’s in terrible shape,” he said. “A good heavy snow might take it down.”

Loftin has taken first steps to get estimates for a replacement. He said the city would like to move storage of road salt and other aggregates to the quonset hut at the cemetery, rather than storing it alongside city equipment as is currently done.

The replacement bearing for the clarifier arm at the Waste Water Treatment Plant has arrived. Loftin hoped it would be installed yet this week.

Loftin said some brush removal had recently been completed near the old City Hall building, improving the appearance of the area.

Two of the new generators have arrived. One has been placed on a pad by the Police Department. Loftin hoped the units would be completely connected in the net week.

Loftin reported that the city currently had a bit less than $2.4M in debt, but that three of the bonds representing that debt would be paid off over the next three years. He said one of those three, a bond for the city pool, would be paid off yet this year.

There was no closed session this week.

City officials and aldermen will reconvene on February 11th at 5 p.m. at City Hall. Meetings are open to the public.