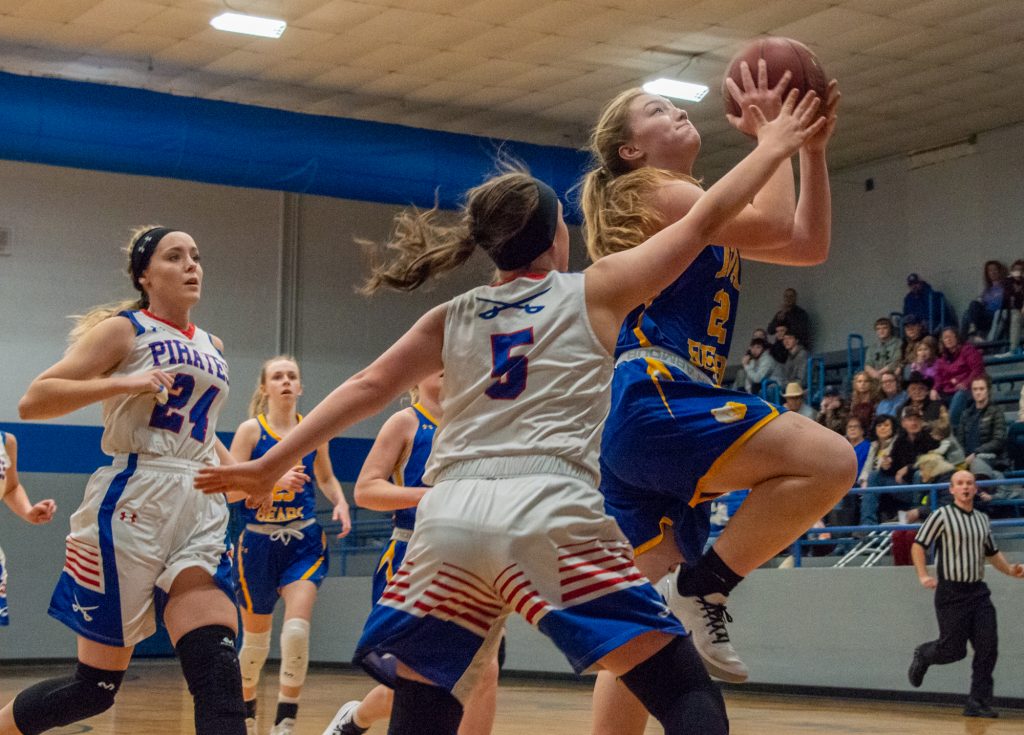 Ava High School freshman Olivia Gastineau (22) jumps up past Norwood defender CAssie Wright for a layup attempt during the second round of the Annual Cabool Classic Basketball Tournament on Tuesday, January 21, 2020, in Cabool, Missouri. (Jason Hoekema/Herald)

CABOOL – This week the Lady Bears have been competing in the Annual Cabool Classic Basketball Tournament to the east of Douglas County. In their first night of play the Lady Bears took a dominant, 50-21, victory over the Bakersfield Lady Lions.

It was a game which allowed Coach Nathan Houk to take the second half and use the play on the maple to teach athletes on the bench.

That was Bakersfield as the Lady Bears took the opening quarter, 18-5, with a pair of threes from senior Claire Fossett and Emaly Keyes. Hannah Evans picked up six, two on an offensive rebound and another solo at the other end of the court in transition.

On the flipside of the page only Sierra Carter and Shelby See made it through the paint to the steel. The fifth point of the first was on a foul drawn from Fossett, which also served as the first point scored in the game with 6:36 left in the first.

The Bakersfield offense didn’t find any traction in the second, either. The Lady Bears did cool, though. Ava served up just nine points before the break over the Lady Lions’ six.

Hannah Evans picked the three-point-play from Ashton Yeager while single buckets from Baylan Alexander, Lexie Gastineau, and Olivia Gastineau on the offensive rebound.

The Lady Bears did not look back past the third quarter where they outpaced and outplayed Bakersfield with a 14-3 third quarter.

The top of the Lady Bears’ roster lit up with Claire Fossett hitting the hoop for six and Baylan Alexander worked in the post for two more buckets bringing her game-total to six points.

At the end of three the Lady Bears were leading 41-14 and had a unique opportunity which coach Houk took.

From the bench, using the play on the maple as examples, he coached younger players who may be the ones to fill the ranks after this year’s seniors are out.

Even with the relievers on the court Ava topped Bakersfield, 9-7, in the fourth quarter. A spark, however late, came up as Bakersfield’s Yeager took a game-ending shot for three at the buzzer but Ava had it all sewn up, 50-21.

With Monday’s win over Bakersfield the Lady Bears were bracketed against the, 7-4, Norwood Lady Pirates on Tuesday, where they came up with 50 points in their second consecutive game.

At first it did not seem as if the Lady Bears were going to run away with it after they came out for the first quarter with just six points, the second lowest first quarter of the season.

The Lady Bears haven’t been below double digits out of the gate since the season opener against Hollister. The Lady Bears were held to just five points in the first in that game.

Ava was trying to work the post with Claire Fossett posted in the paint but deflected and intercepted passes to the inside caused several turnovers. Evans and Olivia Gastineau hit the bucket, Evans twice, but fouls quickly came into the picture.

The second quarter was a heavy contrast to the 6-5 first. The Lady Bears got their footing and dug-in like a tick with a 15-2 run over the Lady Pirates.

Hannah Evans, who had quite the night with 17 points, struck first with the three-point-play on a foul drawn from the Norwood defense. Following Evans was Olivia Gastineau with one from downtown to push the Lady Bears up 6-0 in the second.

Evans hit the bucket again, twice. One was on the inbound which found her right under the hoop for the bucket. Olivia Gastineau also found a way through the Norwood defense while Claire Fossett and Eden Little drew fouls for another three points before Ava hit the lockerroom leading 24-12.

Even when Norwood got the rock in the circle, they only came back for seven points after blanking-out on five free throws. Kaytlynn Drake put one in on the offensive rebound and also hit the net from outside for three points before the break.

As most teams do, Norwood hit the gas and brought out full-court pressure in the second half. Setting up traps and keeping the ball handler in check, the Lady Bears were forced to play leapfrog with passes down the court to stifle the pressure.

Emaly Keyes came out in the second half and was able to get open for her set-and-shoot routine for three points. Meanwhile Evans hit the bucket again on the inbound pass and was forced to create the improbable with a bucket later in the third.

On the other end of the court Norwood carved-out nine points thanks to an open three by Drake. Even with the hit, the Lady Pirates trailed by ten. The Lady Pirates were able to redeem themselves at the stripe, going four-of-four on fouls drawn from Lexie Gastineau and Evans.

With the 34-21 lead going into the fourth it was time to rotate players to give the starters a break and prevent the Gastineaus from fouling out – each ending the game with four whistles.

Sara Mendel took the offensive rebound and made two. Claire Fossett, Evans and Eden Little each made just one bucket, but it was time to feed the ball to another player.

Lexie Gastineau was that player.

She made three shots, all on assists from her sister and Evans. She would have had her second three-pointer to boast about, but the ball decided it wasn’t going through and rattled back out.

In total, the relievers put in the work for nine of Ava’s 16 points in the fourth quarter putting the final nail in as Norwood struggled and didn’t get their final possession to score at the horn.

This win, and the 100 points scored in the tournament so far, sets the Lady Bears against Eminence Lady Redwings. The school is a Class 1 campus in District 3 and are rolling through a busy .786 season with a record of 14-3 and were the number one seed in the tournament.

Common opponents which the Lady Redwings defeated include Mountain Grove (59-47), Willow Springs (58-51) and Bakersfield. Interestingly, Eminence lost to Norwood earlier in the season which creates some uncertainty of Friday’s outcome.

Their short roster could spell their fall, but their offense is out-scoring Ava this season according to the MSHSAA comparison while the Ava defense has allowed fewer points per game than the Lady Redwings.

Tipoff for the championship game is scheduled for Friday, January 24th, at 5:30 P.M. inside the newer facility at Cabool High School.